It brings me to tears just to think about what I'm about to type but seeing as how she was my fur baby and a star once or twice on the site, I felt it only right to share her memory with all of you.

Yesterday while at job 1, I received a call that nearly stopped my heart.  My little fur baby, Ashley, had been in the hospital for the past two days as they tried to get her blood sugar straightened out and as it turns out, it wasn't simply that which was causing her health to fail.  They discovered a large tumor on her pancreas which treated or not, would unfortunately leave us with the same same, bitter ending.  I had two options and as I couldn't bare to put her through any more suffering just so I could have her by my side a little longer, I made the call.

It was one of the hardest decisions of my life and one I can only hope she understood.  She joins now her brothers and sister in that great big dog park in the sky and I will carry her in my heart every day that we're apart. 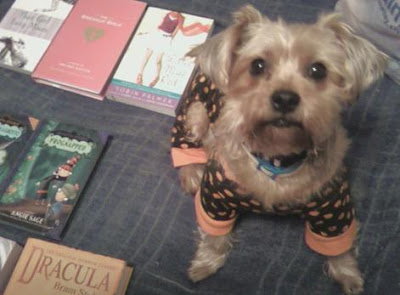 I will miss you my sweet girl.
Rest in peace.

Email ThisBlogThis!Share to TwitterShare to FacebookShare to Pinterest
Labels: 2013, RIP

Oh sweetie. I wish I could wrap you in a big hug. It's not fair. *hugs*

I am so sorry for your loss:( Hugs

Oh no Gina. I'm so sorry to hear about your loss.

It's been a bad weekend for this all around. My husband lost a good friend yesterday as well.

Oh Gina, I am so very, very sorry for your loss! Having to make that decision is one of the hardest things we have to do when we have furbabies. Sending hugs!

Awww, its so sad to lose a fur baby. I wish they could live longer with us. **Hugs**