BLOG TOUR: Beyond the Pale - A Fantasy and Paranormal Experience!

Hi there fellow readers!
Welcome back to Satisfaction for Insatiable Readers...the place that knows how to party, and by party we mean READ AND SHARE GREAT BOOKS!

Today, we're hosting a spot along a blog tour celebrating the recent release of a Young Adult/New Adult anthology that lives in the realm of fantasy and paranormal.  Don't believe me? Well, let's see if I can clue you in then.  Do THESE names ring a bell?

I thought they might.
Let's see, personally I've seen the movie of the second, purchased the third, heard of the fourth, wish listed the fifth, read other works by the sixth, and heard of the seventh and eighth.  Not too shabby.  Where do YOU rank?  No judging; just curious.  Anywho....no matter how high or low your "read" count, there's always room for improvement, hence today's featured title.  Ready to meet and greet the next addition to your wish list?  Your wish is my command.  Today's blog tour spotlight shines on.... 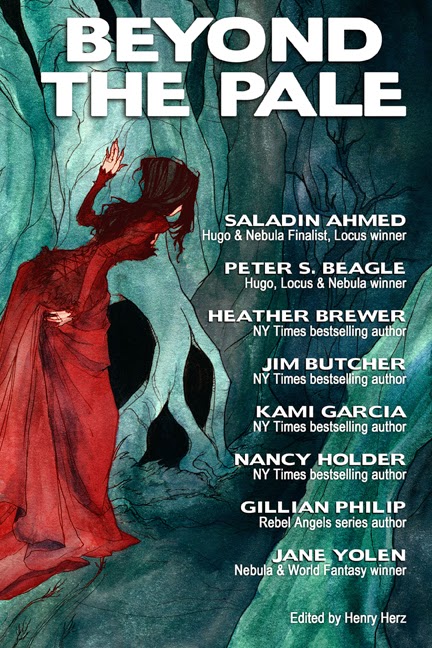 About the book....
Beyond the Pale is an anthology of fantasy, urban fantasy and paranormal stories that skirt the border between our world and others. Was that my imagination, or did I hear something under my bed? What was that blurred movement in my darkened closet? There is but a thin Veil separating the real and the fantastic, and therein dwell the inhabitants of these stories.  Beyond the Pale contains eleven dark fantasy, urban fantasy and paranormal short stories by award-winning and New York Times bestselling authors:

"Hooves and the Hovel of Abdel Jameela" by Saladin Ahmed (author of Throne of the Crescent Moon)
"The Children of the Shark God" by Peter S. Beagle (author of The Last Unicorn)
"Misery" & "Shadow Children" by Heather Brewer (author of Vladimir Tod)
"Even Hand" by Jim Butcher (author of The Dresden Files)
"Red Run" by Kami Garcia (author of Beautiful Creatures)
"Pale Rider" & "The Adventures of Lightning Merriemouse-Jones" by Nancy Holder (author of Wicked)
"Frost Child" and "South" by Gillian Philip (author of Rebel Angels)
"A Knot of Toads" by Jane Yolen (author of Owl Moon)

The noun “pale” refers to a stake (as in impaling vampires) or pointed piece of wood (as in a paling fence). “Pale” came to refer to an area enclosed by a paling fence. Later, it acquired the figurative meaning of an enclosed and therefore safe domain. Conversely, "beyond the pale" means foreign, strange, or threatening. You are about to go Beyond the Pale. 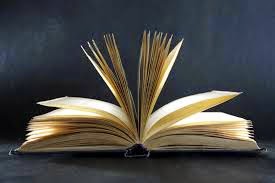 Now, as if you weren't intrigued enough, I've got the hook up for you once again.  Courtesy of Henry Herz himself, I have the privilege of sharing an AWESOME excerpt with all of you!  The following passage is from Peter S. Beagle's "The Children of the Shark God".  Read on my friend's, read on.....

Once there was a village on an island that belonged to the Shark God. Every man in the village was a fisherman, and the women cooked their catch and mended their nets and sails, and painted their little boats. And because that island was sacred to him, the Shark God saw to it that there were always fish to be caught, and seals as well, in the waters beyond the coral reef, and protected the village from the great gray typhoons that came every year to flood other lagoons and blow down the trees and the huts of other islands. Therefore the children of the village grew fat and strong, and the women were beautiful and strong, and the fishermen were strong and high-hearted even when they were old.
In return for his benevolence the Shark God asked little from his people: only tribute of a single goat at the turn of each year. To the accompaniment of music and prayers, and with a wreath of plaited fresh flowers around its neck, it would be tethered in the lagoon at moonrise. Morning would find it gone, flower petals floating on the water, and the Shark God never seen—never in that form, anyway.
Now the Shark God could alter his shape as he pleased, like any god, but he never showed himself on land more than once in a generation. When he did, he was most often known to appear as a handsome young man, light-footed and charming. Only one woman ever recognized the divinity hiding behind the human mask. Her name was Mirali, and this tale is what is known about her, and about her children.
Mirali’s parents were already aging when she was born, and had long since given up the hope of ever having a child—indeed, her name meant “the long-desired one.” Her father had been crippled when the mast of his boat snapped during a storm and crushed his leg, falling on him, and if it had not been for their daughter, the old couple’s lives would have been hard indeed. Mirali could not go out with the fishing fleet herself, of course—as she greatly wished to do, having loved the sea from her earliest memory—but she did every kind of work for any number of island families, whether cleaning houses, marketing, minding young children, or even assisting the midwife when a birthing was difficult or there were simply too many babies coming at the same time. She was equally known as a seamstress, and also as a cook for special feasts; nor was there anyone who could mend a pandanus-leaf thatching as quickly as she, though this is generally man’s work. No drop of rain ever penetrated any pandanus roof that came under Mirali’s hands.
Nor did she complain of her labors, for she was very proud of being able to care for her mother and father as a son would have done. Because of this, she was much admired and respected in the village, and young men came courting just as though she were a great beauty. Which she was not, being small and somewhat square-made, with straight brows—considered unlucky by most—and hips that gave no promise of a large family. But she had kind eyes, deep-set under those regrettable brows, and hair as black and thick as that of any woman on the island. Many, indeed, envied her; but of that Mirali knew nothing. She had no time for envy herself, nor for young men, either.
Now it happened that Mirali was often chosen by the village priest to sweep out the temple of the Shark God. This was not only a grand honor for a child barely turned seventeen but a serious responsibility as well, for sharks are cleanly in their habits, and to leave his spiritual dwelling disorderly would surely be to dishonor and anger the god himself. So Mirali was particularly attentive when she cleaned after the worshippers, making certain that no prayer whistle or burned stick of incense was left behind. And in this manner did the Shark God become aware of Mirali.

I don't know about you, but I'M curious to read more...and the delve into the OTHER author's works as well!  Special thanks to Henry Herz for the chance to share this release with all of you.  (THANKS!)  For more information on this title, Mr. Herz or the publisher, feel free to click through any link included in this post.  This title released a few weeks back via Birch Tree Publishing, so be on the look out for it on a bookstore shelf or online retailor of your choosing.

Awesome. I've read or seen some aspect of all but one of those series...and gave up on one of them. (I know, I know.) Well, we all have different tastes, right?