BLOG TOUR: If You Were Me and Lived in...with Author Carole P. Roman + GIVEAWAY!

Today, we're joining a blog tour already in progress with The Children's Book Review team that stars TWO series of Children's Nonfiction titles from a VERY prolific author...and when I say VERY, I mean very.  Here's a little more about this fab collection of books... 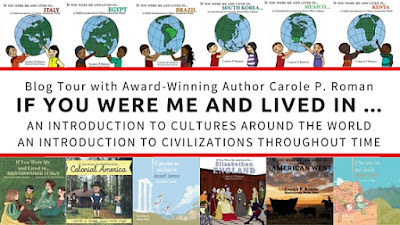 IF YOU WERE ME AND LIVED IN … AN INTRODUCTION TO CIVILIZATIONS THROUGHOUT TIME
a fascinating way to introduce young children to the world as it was, so that they may begin to learn about their roots and how the world and the people in it have evolved. Readers will learn about things like housing, land, cooking, diet, clothing, and the jobs and hobbies people had in different times.

IF YOU WERE ME AND LIVED IN … AN INTRODUCTION TO CULTURES AROUND THE WORLD
...readers learn what it is like to live in other countries, see famous architecture, celebrate a favorite holiday, discover popular names for both boys and girls, and they will be fascinated with diverse and rich history and colorful traditions. On the way, they might also learn a foreign word or two!

I've had the pleasure of reading several of the titles and while I can honestly say I'm not a history buff, it intrigued even the likes of me...but that's a story for another day.  The reason for today's post is very special indeed for not only are we a part of the BIG PICTURE (aka tour), but we had the chance to sit down (virtually) with the author herself.  She's a self described lover of History in its many forms and while I could sum up my experience "chatting" with the mind behind the works, I think it would do far better for you to experience it yourself.  Thus, I bring you today's author in the spotlight...Carole P. Roman!

I love books. I have been an avid reader my entire life. Being an indie writer has opened a doorway allowing me to write without rejection. I don't answer to a publisher and can pick and choose what I want to write about. My kids dared me to write a book and I wrote my first book Captain No Bear An Imaginary Tale of a Pirate's Life. It was not only successful, but won some prestigious awards. I realized I could do this and went on to write nine others in that series. I created a cultural non-fiction series that was embraced by both parents and educators. That has grown to 18 award-winning best-sellers. I tried my hand at rhyming books and followed with this new series that does for history what my first one did for culture. I love the whole process, from idea, to creation, to publicity.

I was a social studies teacher forty years ago. I have spent a lifetime reading history books. It was like chocolate and peanut butter—a natural combination. I had a head full of information ready to be utilized. Nobody but my grandson cares about most of this information. If I start talking about what caused the Renaissance, I am met with painful groans. I know I make it entertaining. Most people are gob smacked with the information, but I will admit they have to be a willing audience. I think the “edutainment” term is fantastic, because, if you read the reviews, that is exactly what my books are—a marriage of entertainment and education. All I needed was an artist and I was in business!

You are so perceptive. My grandmother made her home with us when I was a child. She was born in Austria-Hungary and her life was a fascinating collection of stories. She was born in 1898, and had lived through the First World War. Her grandfather was a cook in the Russian army during the Napoleonic invasion. I loved listening to her history and I had plenty of questions. I am interested in everyone I meet; I love hearing their personal stories. If I watched a movie about the pyramids or the civil war, I had to research, know all the players, and find out the circumstances that created the problem. I love history and the people who made it.

Since I am the writer, publisher and the publicist, I love almost every part of the process. I love the spark of an idea, the research, writing then reading it back, surprised that it even came from me. I get excited when the emails with the illustrations arrive, delight with the marriage of text with pictures, the thrill of seeing it come together. Visiting Amazon, Goodreads and the many blogs and reading the reviews, the thrill that someone really loved it is like Christmas or your birthday everyday! Winning an award … what? ME? An award you say? I have a row of trophies now. They are special, really special.  Now the negative, editing, finding out I got something horribly wrong. But, the beauty with self-publishing is I can go back and fix it—which I do.

I can't. It's like picking children. I loved learning about the gods and goddesses of Ancient Greece, the artwork of the Renaissance period (the cosmetics were pretty fascinating too), Elizabethan England's food was really interesting, Colonial America's hardships, the relationship with the natives, the Silk Road, and then the actual process of making silk, or even the process of making paper in Ancient China, the Mayan concept of beauty, how the Vikings REALLY lived, life for a child on the Oregon Trail and the thrill of getting your own horse. Did I forget one?

I have lived in each one of them. When I traveled, I made my kids think what life was like for a child when we walked the streets of Florence, fished on the Aegean, or traveled across the American desert. We have pretended to be in Newgate, London's infamous jail, or walked the streets of Paris the same route as Marie Antoinette. Wherever I am, I close my eyes and travel back wondering how people lived and what made their lives special. In my own backyard I have imagined the colonists and royalists fighting over the right to live the way they wanted to.

So many time periods, so little time. I may have a contest and let someone else pick it.

6.  Any thoughts on trying your hand in the world of Fiction or does the world of history hold your whole heart in its hand?

I have done my Captain No Beard series, but I'm thinking of a YA chapter book. I've actually started it, but it went onto a back burner until I could get these histories out of the way. I think I will revisit it this weekend.

7.  If you could go back to before these works came to life, and spend time with your self (so to speak), is there any sage advice you would pass onto your former self?
Stop obsessing over what might happen. In the end, nothing really mattered.  Live more in the moment and cut the carbs.

Special thanks to author Carole P. Roman for indulging my curiosity and sharing a bit about herself , her process, and her works with all of us.  Many thanks to Bianca at The Children's Book Review for making it all happen and assembling the tour to perfection.  (THANKS GUYS!)  For more information on this title, the author, THIS TOUR, or those on the horizon, feel free to click through the links provided above.  These titles are available now but you might want to jump on the bandwagon sooner rather than later because as I said, she's a VERY prolific writer and the longer you wait, the more catching up you'll have to do.  ^-^  Now, for the piece de resistance....the TOUR WIDE GIVEAWAY!

All you have to do is...
CLICK HERE
...to access the Rafflecopter form and you're in it to win it!

Email ThisBlogThis!Share to TwitterShare to FacebookShare to Pinterest
Labels: 2016, author interview, blog tour, Carole P Roman, children's nonfiction, giveaway, If You Were Me and Lived In series, The Children's Book Review