BOOK SPOTLIGHT: You Will Know Me by Megan Abbott + SURPRISE!

Today, we're shining the book spotlight on a title that is set to hit bookstore shelves THIS TUESDAY (07/26/16) via Little, Brown & Company.  It's the latest release from an author that's been wielding her craft with much success over the past few years, and from the sound of things, she's struck gold once again.  Be sure to KEEP READING after the spotlight for some EXCITING NEWS but first, I give you today's featured title... 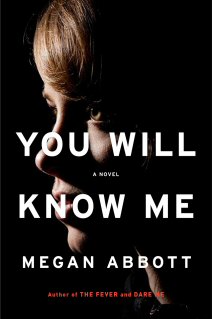 About the book...
The audacious new novel about family and ambition from “one of the best living mystery writers” (Grantland) and bestselling, award-winning author of The Fever, Megan Abbott.

How far will you go to achieve a dream? That’s the question a celebrated coach poses to Katie and Eric Knox after he sees their daughter Devon, a gymnastics prodigy and Olympic hopeful, compete. For the Knoxes there are no limits — until a violent death rocks their close-knit gymnastics community and everything they have worked so hard for is suddenly at risk.

As rumors swirl among the other parents, Katie tries frantically to hold her family together while also finding herself irresistibly drawn to the crime itself. What she uncovers — about her daughter’s fears, her own marriage, and herself — forces Katie to consider whether there’s any price she isn’t willing to pay to achieve Devon’s dream.

From a writer with “exceptional gifts for making nerves jangle and skin crawl” (Janet Maslin), YOU WILL KNOW ME is a breathless rollercoaster of a novel about the desperate limits of parental sacrifice, furtive desire, and the staggering force of ambition.

What was the inspiration for You Will Know Me?
I’ve always been interested in families of prodigies. How power operates in those families, how ambition does. Then, during the London Olympics four years ago, I saw this video of the parents of American gymnast Aly Raisman watching their daughter’s uneven bar routine and it kind of blew me away. They were so invested in it, so connected to her. They moved as she moved. They knew every beat of the performance. The footage went viral and the response to it was tricky. Some people found it funny, others found it problematic and there was some finger pointing. I think we all struggle with how invested parents should be in their children’s development, but with exceptionally talented children, all that is thrown into high relief.
I could just feel the book taking shape after that. How does that kind of intense focus on a child’s talent affect a marriage, for instance? What about siblings? And families in general fascinate me—the place of the greatest darkness and the greatest light.

You Will Know Me is a bit of a departure in that it focuses more on the parents’ perspective. Why did you choose to shift gears in this way?

My last book, The Fever, had three viewpoints, one of whom was the father of two teens, and I really loved it. Exploring the gap between how parents view their teens and how teens view themselves, and vice versa. But it seemed thrillingly different in the case of You Will Know Me. Katie, the protagonist, is so close to her daughter, Devon, because of the way the family has circled itself around Devon’s extraordinary talent. And that closeness fascinates me.
At what point does your child become a stranger to you? Because all children need to break apart from you to become themselves, but is it slower to happen in the case of a prodigy? A case when the parent, like Katie, is so tied up in her daughter’s everyday life?

Have any gymnasts or parents of youth athletes read and responded to You Will Know Me yet?

I’ve had a few early gymnast readers who’ve been very supportive. In particular, they’ve responded to the parent-booster culture in the book, the way parents invest in a gym and insert themselves into gym politics. The hothouse environment that the parent viewing area can take on. Or, “gym drama,” as it’s called. Which seems to have all the hallmarks of a great reality TV show, or a Shakespearean play.

Megan Abbott is the Edgar®-winning author of the novels Queenpin, The Song Is You, Die a Little, Bury Me Deep, The End of Everything, Dare Me, and The Fever, which was chosen as one of the Best Books of the Summer by theNew York Times, People Magazine and Entertainment Weekly and one of the Best Books of the Year by Amazon, National Public Radio, the Boston Globe and the Los Angeles Times.

Her writing has appeared in the New York Times, Salon, the Guardian, Wall Street Journal, the Los Angeles Times Magazine, The Believer and the Los Angeles Review of Books.

Born in the Detroit area, she graduated from the University of Michigan and received her Ph.D. in English and American literature from New York University. She has taught at NYU, the State University of New York and the New School University. In 2013-14, she served as the John Grisham Writer in Residence at Ole Miss.

She is also the author of a nonfiction book, The Street Was Mine: White Masculinity in Hardboiled Fiction and Film Noir, and the editor of A Hell of a Woman, an anthology of female crime fiction. She has been nominated for many awards, including three Edgar® Awards, Hammett Prize, the Shirley Jackson Prize, the Los Angeles Times Book Prize and the Folio Prize.

Special thanks to Meg at Literary Tandem for the chance to bring this title to you.  (THANKS!)  For more information on this release, the author, the publisher, or those promotions on the horizon, feel free to click through the links provided above.  This title releases TUESDAY, JULY 26, 2016, so be on the lookout for it on a bookstore or virtual retailer of your choosing.  Now for the SURPRISE bit I mentioned...

Little, Brown & Company is giving YOU a chance to buy THIS TITLE and SCORE A SECOND OF THE AUTHOR'S WORKS FOR FREE!  That's right!  All you have to do is preorder a copy of You Will Know Me, than go this THIS LINK to fill out the form with your purchase information and BAM!  You'll get a paperback edition of one of her other titles for FREE!  Sweet!

It sounds like this has a whole lot more to it than I at first had thought. Definitely one my (naughty) little sister, a one-time gymnast herself, would enjoy.