Today, we're shining the BOOK SPOTLIGHT on a title currently on tour with Rachel's Random Resources. It's a book that mixes the signs of the zodiac with a curious cast of characters that all link up when it's said and done. Caught your attention? I got you covered, and I'm sharing the boat because I couldn't connect the astrology bit with that charming cover.  KEEP READING for a proper introduction, then a PEEK BETWEEN THE PAGES with a special excerpt just for you! 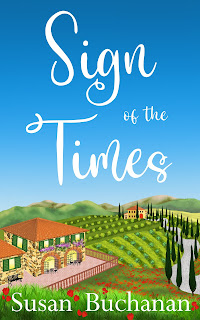 Sign of the Times
by
Susan Buchanan
About the book...
Sagittarius – Travel writer Holly heads to Tuscany to research her next book, but when she meets Dario, she knows she’s in trouble. Can she resist temptation? And what do her mixed feelings mean for her future with her fiancé?
Gemini – Player Lucy likes to keep things interesting and has no qualms about being unfaithful to her long-term boyfriend. A cardiology conference to Switzerland changes Lucy, perhaps forever. Has she met her match, and is this feeling love?
Holly is the one who links the twelve signs. Are you ready to meet them all?
A tale of love, family, friendship and the lengths we go to in pursuit of our dreams.
---> GRAB YOUR COPY TODAY <---
~~~~~~~~~~~~~~~~~~~~~~~~~~~~~~
~~~   EXCERPT   ~~~
Holly has finally arrived at her lodgings for the next few weeks after a false start made her break her journey.
‘Benvenuta,’ greeted the owner of the three-star family-run Hotel di Piazza S Paolo. Sig.a Tagliaferri had spoken several times with Holly on the phone and welcomed her as if she were her long-lost daughter. With true Tuscan hospitality, she bent down and picked up two bags which Holly had dumped next to the terracotta urns at the entrance when Sig.a Tagliaferri had enveloped her in her embrace.
The signora ushered Holly through to the simple breakfast room and offered her an espresso. Holly smiled at this institution of Italian culture and couldn’t help but draw a parallel with the Brits offering cups of tea the moment anyone entered their home. As she sipped her espresso, Sig.a Tagliaferri chatted to Holly as if they were old friends.
Two almost identical men, with black hair, dark eyes and deep tans appeared. Holly assumed they were brothers. Her guess proved correct when Sig.a Tagliaferri launched into a fast-paced exchange with them.
‘Hollee,’ she enunciated, ‘these are my sons, Emilio and Guido. Aren’t they handsome?’ she asked, brimming with pride.
Embarrassed, Holly quickly answered, ‘Si.’ They were attractive-looking men, but they didn’t do it for her. Not now, not after having met Dario. The two ‘boys’ sat at the table, as their mother fixed them espressos. Guido complimented Holly on her Italian, Emilio practised his English with her, which Holly usually found so sexy. Italian men seemed to elongate the words. This time, although it still sounded sexy, it didn’t melt her insides.
After promising to let them show her around, Holly excused herself. With Guido and Emilio fighting over who would carry her bags to her room, she headed off to take a shower. Her room was surprisingly large, with two shuttered windows. Although it was only May, it was stifling. There was no air conditioning that she could see. Anxious to catch a glimpse of the view her bedroom offered, she risked opening the shutters and immediately a whoosh of heat struck her. Peering out, she gazed upon the valley below.
Two villas stood nearby; one almost conjoined to theirs and one about a mile away. The one next to her exhibited large wrought-iron gates, and she could just see into its garden, which encompassed perfectly tended lawns, with a large fountain in the midst of a few strategically placed shrubs.
Tearing her gaze away, she studied the house on the hill. It seemed a far grander establishment. Some rich tourist had probably bought it and didn’t even appreciate it. It appeared to have a vineyard to the right of it. She could explore later. Gulping in some unwanted, fetid air, Holly closed the shutters and went to shower.
Steaming jets of water poured over Holly’s tired body. What a bonus to have a power shower in such traditional premises. The modernity surprised her just as much as at L’Uliveto. She poured a generous dollop of shower gel onto her bath mitt and vigorously rubbed her aching limbs. She decided she could do with a little snooze after her shower. Surely she must be entitled to a siesta in this heat?
Holly woke with a start. She could hear a phut, phut, phut noise. Sleepily, she opened the shutters to see a tractor trundling through the fields. The land to the left of the villa must be farmland. Then she noticed Guido astride the tractor, waving. She grinned and waved back. Revived, she arched her body and shook herself out. That was better. Turning on the cold tap, she splashed water on her face and reapplied her moisturiser. Her skin became so dry, with the heat here. It must be around thirty-two degrees and it’s only May. She pulled a fresh T-shirt over her head and studied herself in the mirror. She still looked a bit tired and her hair resembled a bird’s nest, from having fallen asleep on it whilst it was still wet. Picking up her satchel and her notebook, she headed downstairs.
~~~~~~~~~~~~~~~~~~~~~~~~~~~~~~
About the author... 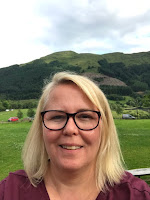 Susan Buchanan lives in Scotland with her husband, their two young children and a crazy Labrador called Benji. She has been reading since the age of four and had to get an adult library pass early as she had read the entire children’s section by the age of ten.
Susan writes contemporary fiction, often set in Scotland, usually featuring travel, food or Christmas. When not working, writing, or caring for her two delightful cherubs, Susan loves reading (obviously), the theatre, quiz shows and eating out – not necessarily in that order!
TWITTER  |  FACEBOOK  |  INSTAGRAM  |  SITE
~~~~~~~~~~~~~~~~~~~~~~~~~~~~~~

...signed copies of Just One Day – Winter and Sign of the Times
(UK Only)
*Terms and Conditions –UK entries welcome. Please enter using the Rafflecopter box below. The winner will be selected at random via Rafflecopter from all valid entries and will be notified by Twitter and/or email. If no response is received within 7 days then Rachel’s Random Resources reserves the right to select an alternative winner. Open to all entrants aged 18 or over. Any personal data given as part of the competition entry is used for this purpose only and will not be shared with third parties, with the exception of the winners’ information. This will passed to the giveaway organiser and used only for fulfilment of the prize, after which time Rachel’s Random Resources will delete the data. I am not responsible for despatch or delivery of the prize.
a Rafflecopter giveaway
~~~~~~~~~~~~~~~~~~~~~~~~~~~~~~ 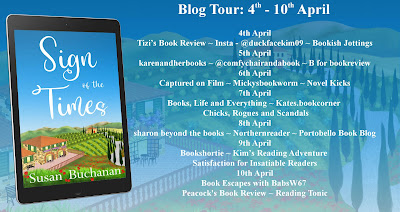