RRR presents... WINNING BACK HIS DUCHESS by Amanda McCabe - REVIEW!

Today's blog tour guest is making her way through the blogosphere with Rachel's Random Resources celebrating the release of her latest release via Mills & Boon / Harlequin Books...and I am so pleased to help kick off the tour!  Author Amanda McCabe brings us a Historical Romance that tells the tale of young love broken, yet not necessarily beyond repair. With two stunning leads, it's bound to be good...or rather WAS DEFINITELY GOOD seeing as this is a review post and we're about to get between the pages. So, ladies and gents, execute your best bows and/or curtseys as we take a closer look at today's ebook of choice... 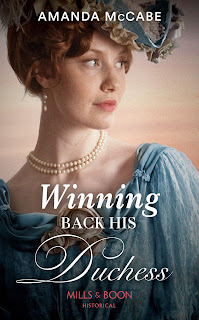 Winning Back His Duchess
by
Amanda McCabe
Mills & Boon | Harlequin Books
About the book...
Escape to beautiful Venice for this Victorian marriage reunited story…
An invitation to Venice…
To save their marriage!
Suggesting divorce to her estranged husband, Jamie, Duke of Byson, takes all of Rose Wilkins’s courage. Years of distance and heartbreak have taken a toll—she needs a new start. But Jamie won’t hear of divorce, because of the scandal alone. His counteroffer is a trip to Venice… Might discovering Venice’s delights together rekindle the still-simmering desire that drew Rose to Jamie as a starry-eyed young American heiress?
AMAZON  US  |  UK
~~~~~~~~~~~~~~~~~~~~~~~~~~~~~~~~~~~~
As previously stated, the leading couple here, Rose and Byson, are one to certainly remember. She, the American Beauty, youngest of the Wilkens sisters and with the biggest heart. She loves from her nose to her toes, and everything in between. When she fell for Byson, it was whole-heartedly and without any regrets...no, those would come later, but not for reasons you might think. You see, when we join her story in progress, she and the now Duke are separated, and have been for a time. They are living their lives, but certainly not their best ones because they are definitely a pair better together than apart. They complement each other and their love is so pure, so deep...but heartache comes in many forms and once communication breaks down, and old demons crop up, the tower of HEA moves seemingly out of reach. Thank goodness the man she married is no fool...well, not completely anyway.
Byson was never intended to be the Duke, as he was the spare, but circumstances came and went, leaving him in its seat. That's a big enough change to deal with for most...and that was only the beginning. A great loss rocks his world and instead of finding comfort in each other, he turned to drink, while she turned inward, leaving them further apart than if they were in different countries. When the motion is made to call their losses and make their new arrangement more permanent, he finally hears his call to action. He can't bare to lose the woman he so ardently loves, and though he may not always show it, he's dedicated to finding their way once again.
The story as a whole was wonderful with a full back story for them both, connections to other characters made clear, and a future laid out for all to see. I loved the fact that he wasn't perfect, and yet so much more so than many in his place. He was a scholar, a bookworm no less, and sometimes got caught up in that safe place between the pages, but when push came to shove he was there for her, emotionally, physically, both heart and soul. The little scheme of sorts that he and Beatrice were attempting at the Pryce estate was darling...and dually served their purpose. Rose was as beautiful as her name with a bruised heart of gold. Her self-made armor shone bright, and yet she wasn't opposed to having a knight by her side in the battles of life. Good thing too seeing how before book's end, she'll need one!
A great read for Historical Romance fans, and a great addition to the growing series, this is one readers won't want to miss!
~~~~~~~~~~~~~~~~~~~~~~~~~~~~~~~~~~~~
About the author...

Amanda wrote her first romance at the age of sixteen--a vast historical epic starring all her friends as the characters, written secretly during algebra class (and her parents wondered why math was not her strongest subject...)
She's never since used algebra, but her books have been nominated for many awards, including the RITA Award, the Romantic Times BOOKReviews Reviewers' Choice Award, the Booksellers Best, the National Readers Choice Award, and the Holt Medallion. She lives in Santa Fe with a Poodle, a cat, a wonderful husband, and a very and far too many books and royal memorabilia collections.
When not writing or reading, she loves taking dance classes, collecting cheesy travel souvenirs, and watching the Food Network--even though she doesn't cook.
Amanda also writes as Laurel McKee for Grand Central Publishing, the Elizabethan Mystery Series as Amanda Carmack, and the Manor Cat Mystery Series as Eliza Casey.
SITE | FACEBOOK | INSTAGRAM | PINTEREST | TWITTER
~~~~~~~~~~~~~~~~~~~~~~~~~~~~~~~~~~~~~~

Special thanks to Rachel at Rachel's Random Resources for the chance to bring this tour to you as well as the ecopy for review. (THANKS!) For more information on this title, the author, this promotion, or those on the horizon, feel free to click through the links provided above. This title is available now, so click on over to your favorite online retailer to snag your copy today and be sure to check out the rest of the tour for more bookish fun... 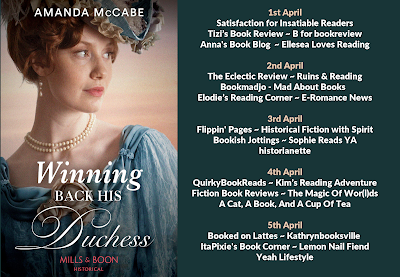 Victorian marriage reunited story ... what a lovely term. What sounds like a great read for fans of this genre, I'm impressed with what seems like a memorable cast of characters.