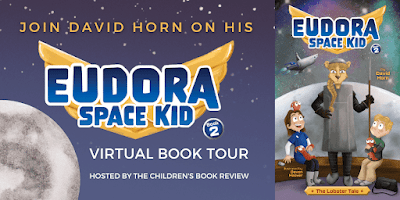 Time for the second post of the day, and it just so happens to feature the SECOND book in a Chapter Book series that's (quite literally) out of this world! Yep. That's right. We're heading into outer space, but don't worry...much...we're in good hands. Ladies and gents, make room on your reading list for one precocious, determined, often times in trouble, but always full of heart kiddo as we join her for a second jaunt through the stars on The Children's Book Review tour starring... 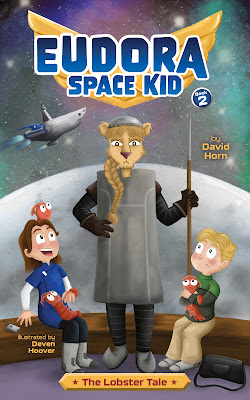 Eudora Space Kid: The Lobster Tale
by
David Horn
Illustrated by
Deven Hoover
9781736677421
About the book...
Freedom for lobsters! The second in the Eudora Space Kid series: a hilariously funny, early reader sci-fi chapter book perfect for elementary-aged kids. Can Eudora and her best friend, Arnold, rescue her favorite lobsters from becoming the next meal at the spaceship’s New Year’s buffet?
Eudora is a normal third-grader who just happens to live on a 36 deck AstroLiner. In SPACE! As a math and science whiz who’s been adopted by what you might call . . . aliens, she has normal ambitions—like being the chief engineer on an AstroLiner. But when her favorite lobsters on board appear on the menu at Chef Franklin’s dinner buffet, Eudora and her best friend, Arnold, hatch a plan to break them out. Will they save their crustacean friends? Or will they end up locked in the ship’s brig? Again . . .
Brilliant for engaging emergent and early chapter book readers.
AMAZON
🦞 🪐 🚀 🦞 🚀 🪐 🦞
There's one thing you can always count on with Eudora...
...you'll have a blast!
Okay, so maybe it would be better said that you're bound to get into hot water...probably the same water the lobster friends were trying to avoid...but by story's end, you'll pull through with a little more shine than you started.  In Eudora, kids have a friend til the end, a die or ride, if you will, for any adventures they wish to partake in, but she's also a good role model.  How so?  Especially with all her antics?  Ah, but you see, pushing the envelope and the limits put forth are all a part of her curious nature, and that very same thing is what give her an edge in the STEM fields she wishes to study.  I mean, her dream is to be a major part of the ship's crew, and the only way to get there is through great grades, know-how, and determination.  She's got plenty of those in spades, with the added bonus of a creative streak, and a curious mind that may lead her into trouble, but also out of it as well...as we see in this story, and a  good thing too because WHEW!  That outcome could have been much MUCH worse...not simply for the lobsters, but the ENTIRE SHIP!
So come aboard, don't be shy!  This is the adventure you didn't know you were waiting for, with a cast of characters you'll grow to love, and a lot of strange and new things to learn and explore!  That's the fun of it though...enriching young minds while having more fun than you could know.  Just watch out for the pinchers because yeah...lobsters don't exactly understand human words or intent, but their defense system is top notch!
🦞 🪐 🚀 🦞 🚀 🪐 🦞
About the author...

David Horn lives in New Jersey with his wife, two daughters, and a funny dog named Trixie. He is a huge science fiction fan and loves reading science fiction books from both the old and new greats. His daughters inherited his love of science fiction and love watching sci-fi shows like Star Trek, Babylon 5, Stargate, and Star Wars. The Eudora Space Kid early reader chapter book series started as funny stories he told his daughters at dinner to get milk to come out of their noses. He hopes your children love Eudora’s silly antics in space too and milk comes out of their noses too!
For more information, visit https://www.eudoraspacekid.com/.
🦞 🪐 🚀 🦞 🚀 🪐 🦞 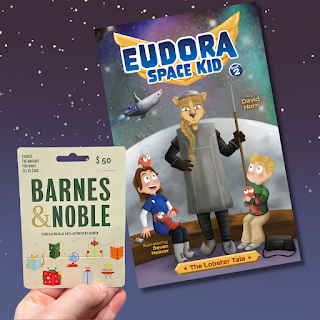