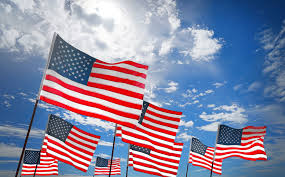 We're kicking off Memorial Day weekend with a BOOKISH bang as we set our sights on a duo of Harlequin Desire titles that are ready and willing to give their own firework show...if you catch my drift. 😉  So in between all the festivities, memorials, and family time, GET YOUR READ ON with this selection of short, yet oh so sweet (mostly!) books perfect for a weekend escape.  Ladies and gents, today's books of choice are center stage... 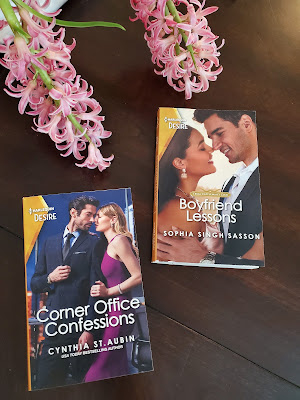 Corner Office Confessions
by
Cynthia St. Aubin
About the book....
To oust his twin brother from the billion-dollar family food empire, CEO Samuel Kane sets him up to violate their father’s cardinal rule: no company romances. Enter Samuel’s new hire, Arlington Banks—the one woman his brother chased but never caught. Too bad the plan backfires when Samuel falls for the bait himself. Because Samuel and Arlie have a long-simmering history of their own. As things heat up between them, will his deception cost him everything—or will the secret Arlie’s keeping do the trick?
- - - - - - - - - - - - - - - - - - - -
A little subterfuge never hurt anyone...right?
Well, okay, so feelings get hurt, and there's definitely more to the story on BOTH sides than either Samuel or Arlie put on the table, but in the end, the just desserts are rewarding for EVERYONE involved!  I loved the good brother, bad brother vibe...though in retrospect, the good was playing at being bad with the whole setup business, but I digress...he had good intentions at heart, even if HE didn't know what his heart was trying to tell him.  She was trying to get her feet back under her after having more than a rug pulled, but the games she steps into are far beyond what her healthy curiosity could have conjured.  I'll just say this...thank goodness for good friends that will kick us in the pants when we need it, and thank heavens for astute observations because it can mean the difference between getting up close and personal with the man of our dreams...versus his brother!
A great story with revenge, second chances, and an HEA you'll adore!
~~~~~~~~~~~~~~~~~~~~~~~~~~~~~~
Boyfriend Lessons
by
Sophia Singh Sasson
About the book....
Shy Lone Star heiress Caitlyn Lattimore is eager to ditch her wallflower status. So when her best friend playfully suggests she practice dating, Caitlyn goes one further. She asks friend of a friend Dev Mallik to give her boyfriend lessons. The spark between them soon turns fun into fire. But is Caitlyn setting herself up for heartbreak? Because Dev’s exacting parents want just the right woman for their son—and they aren’t so sure she’s the one…
- - - - - - - - - - - - - - - - - - - -
A book for all the shy, out of practice gals out there that have it, but perhaps don't quite know how to flaunt it!  Caitlyn was a gem, even with her random turns as a fountain (inside joke!).  She had a heart of gold that had been smashed by an idgit and with her inhibitions slightly lowered, she spoke out of turn...and gained the world.  It's hard to lay your heart on the line, especially so openly and honestly with revelations that may seem embarrassing to some, but as I said, she was a star, as was the recipient of the chance she gave.  Dev was a surprise, especially when we find out how involved his family is with his life (it's a culture thing), but it was refreshing.  He was trying to strike out on his own, and yet still maintain that connection with his family, respectfully.  Grant it, he could have acted a bit faster when Caitlyn is mistaken for a lady of the night by his father...don't ask, or rather READ IT...but by book's end, he redeemed himself in my eyes...and I'm very curious to see how things play out for other characters mentioned as they try to unravel the mystery around the Lattimore estate!
A great story filled with smiles, laughs, a dash of steam, and an HEA you'll be more than satisfied with in the end.
~~~~~~~~~~~~~~~~~~~~~~~~~~~~~~
About the authors....

Cynthia St. Aubin wrote her first play at age eight and made her brothers perform it for the admission price of gum wrappers. A steal, considering she provided the wrappers in advance. When she was tall enough to reach the top drawer of her parents' dresser, she began pilfering her mother's secret stash of romance novels and has been in love with love ever since. A confirmed cheese addict and aspiring cat lady, she lives in Texas with a handsome musician.
- - - - - - - - - - - - - - - - -

Sophia [Singh Sasson] puts her childhood habit of daydreaming to good use by writing stories that will give you hope, make you laugh, cry and possibly snort tea from your nose. She was born in Mumbai, India, and has lived in the Canary Islands, Spain and Toronto, Canada. Currently she calls the madness of Washington, DC, home. She loves to read, travel to exotic locations, bake, scuba dive and watch Bollywood movies. Contact her through http://SophiaSasson.com.
~~~~~~~~~~~~~~~~~~~~~~~~~~~~~~

Special thanks to Lisa at HarperCollins Publishers for the copies for review. (THANKS!) Both titles published THIS WEEK (May 24th, 2022) via Harlequin Books, an imprint of HarperCollins Publishers, so be on the look out for them at your local brick and mortar, or your favorite online retailers!
Until next time, remember...if it looks good, READ IT!
Posted by Gina at 9:26 PM