Hello, hello!
Time for round of today's double dose of bookish goodness, here at Satisfaction for Insatiable Readers.

It's another Rachel's Random Resources tour coming at you and this time around, it's a Contemporary Romance that's got our bookish eyes glowing. From the lovely cover to the sweet title, there's not a thing that will push you away, and everything that will draw you in. Oh and if you liked the earlier post with all the meet cutes? This one has a few to spare! Ready or not, here comes today's blog tour guest and ebook of choice... 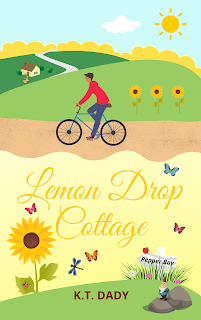 Lemon Drop Cottage
by
K.T. Dady
About the book....
Welcome to Pepper Bay. A small close-knit community where you’ll find chocolate box cottages, quaint shops, love, drama, and a happily ever after.
Snuggle down with this cosy, feel-good, comfort read that whisks you away to a beautiful bay on the Isle of Wight – Perfect for fans of Christie Barlow, Phillipa Ashley, and Holly Martin.
The Pepper Bay books are standalone stories that intertwine with recurring characters. Best read in order for maximum enjoyment.
Lemon Drop Cottage: At first glance, Scott Harper is a shy artist who keeps himself to himself, but he isn’t the man everyone thinks he is. Scott has a secret. One that has kept him firmly away from any chance of having an intimate relationship. The only woman in his life is the one he talks to online but has never met. It’s easier that way, for them both.
Dolly Lynch has just taken over her aunt’s shop in Pepper Bay. Between looking after her teenage son, running around for her old aunt, moving home, and opening a new shop, she barely has time to herself, so she really appreciates the moments she spends talking online with a man she’s never met. Little does she know he’s the same man who lives just up the road in the cutest cottage she has ever seen.
AMAZON  UK  |  US
~~~~~~~~~~~~~~~~~~~~~~~~~~~~~~~~~~~~
Initially, you've got two stories running side by side...
...one unfolding online, and the other in living color.
The thing is, it becomes pretty clear, fairly quickly that these potential pairings are one in the same. But how to reveal the truth of the matter when you've carried on somewhat differently in one world versus the other? When is the right moment to expose your true self and take that final risk....before it's too late? Now don't get morbid...I don't mean death, although that wouldn't be far off the mark with Scott's former job...I mean before someone else does the revealing for you. Is it better to risk it all and go for it, or to hold some of your self back and hope the truth of the matter gets buried under new feelings? Well, I suppose it boils down to how much a person means to another...and if they're truly willing to put the other person before themselves.
Scott is a dear...and a mystery...and a grump...and, okay so he cares, but it's hard to see it through the irritation at times, and it doesn't help that pretty much EVERY time he runs into Dolly, she quite literally is running into him, or throwing things at him, or knocking him down on his derierre...all completely by accident. *ahem* Hard to believe, and yet I speak the truth. Frankie is a gem, and although she wouldn't hurt a fly, she's hurt him plenty times over by circumstance. Good thing he has a tough hide to withstand all the dents, but it's too bad that that thickness extends to his head as well, putting his chance at a HEA pursuing a normal life at risk.
You have to read it to find out how it all unfolds, but suffice it to say they've a sporting chance. You'll fall in love with Frankie and her son as they make a life together in this tiny little town where everyone knows everyone AND their business. You'll wonder about Scott and everything he's not saying between what he actually is...and let's not get started on his former work associate keeping tabs on him through super secret surveillance! Yeah, Scott didn't hold your average 9-5 job, to say the least, but his dedication to living a normal life, finding contentment, and following his heart, even if unexpectedly, is genuine. Even in those moments he second guesses himself, it's from a place of love.
A great read for Contemporary Romance fans, and lovers of the small town romance trope.
~~~~~~~~~~~~~~~~~~~~~~~~~~~~~~~~~~~~
About the author...
Amazon best-selling author, reader, mum, chocolate lover, and a huge fan of a HEA. I was born and raised in the East End of London, and I’ve been happily writing stories since I was a little girl. When I’m not writing, I’m baking cakes or pottering around in my little garden in Essex, trying not to kill the flowers. I’m the author of contemporary romance, middle-grade, and the thought-provoking thriller about mental illness, The Focus Program.
SITE  |  INSTAGRAM  |  TWITTER  |  FACEBOOK
~~~~~~~~~~~~~~~~~~~~~~~~~~~~~~~~~~~~

Special thanks to Rachel at Rachel's Random Resources for the chance to bring this tour to you. (THANKS!) For more information on this title, the author, this promotion, or those on the horizon, feel free to click through the links provided above. Be sure to check out the rest of tour for more bookish fun!
Until next time, remember...if it looks good, READ IT!
Posted by Gina at 4:00 AM

I love a good small town romance book. Scott definitely sounds like an interesting characters with all his mysteries.