It's another two-fer day which means I do a bit more blogging at once, and you reap all the rewards...well, not completely true because my reward happened when I read the book and also in the chance to share it with all of you, but let's not split hairs. The second title in the spotlight today is in a class of its own, and while I want to explain further the momentous novel you're about to encounter, I think the proper introductions should speak first. Ladies and gents, prepare yourselves for a story you won't soon forget.... 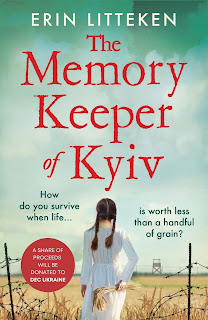 The Memory Keeper of Kyiv
by
Erin Litteken
Boldwood Books
About the book...
In the 1930s, Stalin’s activists marched through the Soviet Union, espousing the greatness of collective farming. It was the first step in creating a man-made famine that, in Ukraine, stole almost 4 million lives. Inspired by the history the world forgot, and the Russian government denies, Erin Litteken reimagines their story.
In 1929, Katya is 16 years old, surrounded by family and in love with the boy next door. When Stalin’s activists arrive in her village, it’s just a few, a little pressure to join the collective. But soon neighbors disappear, those who speak out are never seen again and every new day is uncertain.
Resistance has a price, and as desperate hunger grips the countryside, survival seems more a dream than a possibility. But, even in the darkest times, love beckons.
Seventy years later, a young widow discovers her grandmother’s journal, one that will reveal the long-buried secrets of her family’s haunted past.
This is a story of the resilience of the human spirit, the love that sees us through our darkest hours and the true horror of what happened during the Holodomor.
May we never forget, lest history repeat itself.
A share of proceeds will be donated to DEC's Ukraine Humanitarian Appeal.
AMAZON
~~~~~~~~~~~~~~~~~~~~~~~~~~~~~~~~~~~~~~~~~~~~
It's a Historical Fiction novel that could have been ripped from the headlines, yet centers on horrific events that transpired in the 1930s. Here's the thing though, it's not just about those hardships, those terrors, those things that they had to make it through to try to get to a better day...it's about the people. Their toughness of spirit, their courageous hearts, their willingness to take on the living you-know-where that their villages turned into, all because of the greed of a power, nay a person, that couldn't leave well enough alone. It's about a family that was use to celebrating each day with loved ones, and neighbors, who now had to second guess who they could trust. It's about the beauty that can be found in the midst of great darkness, and the forgiveness given without having ever dared asked the question. It's a story that will move you in both past and present timelines because you have a heart. I was captured fully by Katya's youthful exuberance in the face of evil, but equally so by little Birdie trying to find her voice once again. I was torn apart by the seemingly endless losses suffered by this family, let alone their people as a whole, but once again equally so by the heartache Cassie, Anne, and Bobby were trying to rise above.
I was quite literally brought to tears several times, and whether it was due to the inescapable sorrows that abounded in the past, or the remarkable revelations unfolding in the present, I couldn't honestly say because the story held me by the heartstrings from start to finish. It's one of those works that makes you sit up and take note. Though a fiction novel, it shares a time in history that isn't as well known worldwide...or at least it wasn't by me, but you can bet I'll be learning more about it, and in truth, I hope the world does too. History repeats itself when we haven't learned enough from it the first time to move forward, make amends, and try a new way. A time like this should have never existed in the first place...and yet here we are, watching updates on the current situation around the world, and I can't help but pray it ends before it gets any worse.
A breathtaking work of Historical Fiction that will echo in your heart long after the last page has turned....
~~~~~~~~~~~~~~~~~~~~~~~~~~~~~~~~~~~~~~~~~~~~
About the author... 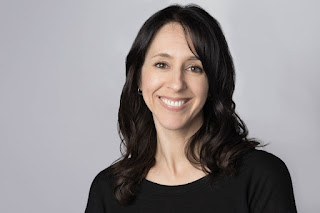 Erin Litteken is a debut novelist with a degree in history and a passion for research. At a young age, she was enthralled by stories of her family’s harrowing experiences in Ukraine before, during and after World War II. Her first historical fiction title, drawing on those experiences, will be published by Boldwood in June 2022. She lives in Illinois, USA with her husband and children.
TWITTER  |  INSTAGRAM  |  BOOK BUB
~~~~~~~~~~~~~~~~~~~~~~~~~~~~~~~~~~~~~~~~

Special thanks to Rachel at Rachel's Random Resources for the chance to bring this tour to you and to Boldwood Books for the copy for review. (THANKS!) For more information on this title, the author, this promotion, or those on the horizon, feel free to click through the links provided above. Be sure to check out the rest of tour for more bookish fun! 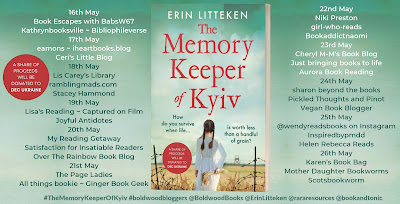