Time to get your Historical Fiction groove on as we welcome another Rachel's Random Resources tour starring none other than the latest work from author Kathleen McGurl! You might remember I featured another of her titles, right here on the site, last year and I ADORED it. So, when I saw another one going round, I simply had to get on board. Curious how it turned out? Well then, let's get to it. Ladies and gents, don your work clothes and grab your cap (preferably blue), as we set our sights on today's blog tour guest and ebook of choice... 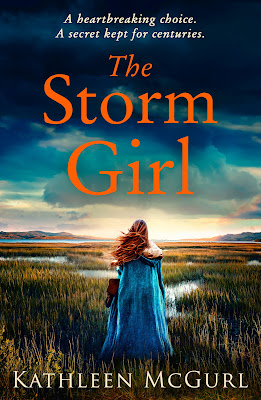 The Storm Girl
by
Kathleen McGurl
About the book...
The gripping new historical novel from the USA Today bestselling author of The Girl from Bletchley Park and The Forgotten Secret.
A heartbreaking choice. A secret kept for centuries.
1784. When Esther Harris’s father hurts his back, she takes over his role helping smugglers hide contraband in the secret cellar in their pub. But when the free traders’ ships are trapped in the harbour, a battle between the smugglers and the revenue officers leads to murder and betrayal – and Esther is forced to choose between the love of her life and protecting her family…
Present day. Fresh from her divorce, Millie Galton moves into a former inn overlooking the harbour in Mudeford and plans to create her dream home. When a chance discovery behind an old fireplace reveals the house’s secret history as a haven for smugglers and the devastating story of its former residents, could the mystery of a disappearance from centuries ago finally be solved?
Sweeping historical fiction perfect for fans of Lucinda Riley, Kathryn Hughes and Tracy Rees.
AMAZON  UK  |  US
~~~~~~~~~~~~~~~~~~~~~~~~~~~~~~~~~
Dual timeline stories can be AMAZING...when they are done right...and such is the case here.  Our introduction to Millie is bittersweet.  She's just starting over after her divorce, moved to a new town with a lot of history (more than she even at first realizes), and just plain trying to find her footing once again.  She makes fast friends with the neighbor across the way, only to find out she's more of a nosy nelly and a judgy judy than anything else.  She tries to get the old time fixer upper she purchased refurbished, but the list of things to tackle is a mile long.  She stumbles into a budding romance with a local gent, only to be warned off by another, which sets her imagination on fire regarding what might be instead of what is.  In short, she's having a time of it, but that seems to be par for the course considering her new home.
Speaking of that home, we get whisked away from present day to experience the life of Esther Harris in all its colorful glory that took place in that very same town, in the former dwelling/establishment that graced the grounds so many centuries ago.  That's right, centuries...and if history has taught us anything, it's that we must learn from it, and it can not be ignored.  Esther, her father, her intended, and pretty much the whole of the townspeople were all connected in more than just the small town sort of way.  Once upon a time, they were part of a smuggling group that while viewed as a victimless crime, ended up created some victims when things boiled over.  What can you do when man gets it into his head that his way is the only way and guns are the chosen show of force?  Esther knew better, as did her sweetheart, but sadly they weren't the majority, and when greed took over, the end came faster than they could have imagined, with results they dared never dream.
It was such a beautiful marriage of past and present.  Seeing Esther come to life, just as Millie was doing the same in other ways.  The big mystery of the smugglers tunnel was a curious twist, as was what was uncovered from so long ago.  That same discovery though is one thing that tangled in my thoughts as it left too much up to supposition in lieu of hard facts, but that's the thing about the past...the only ones that truly know what happened are long gone from this earth, and the dead only tell so many tales.
Take a look back from a new beginning, and discover the magic within the storm.
~~~~~~~~~~~~~~~~~~~~~~~~~~~~~~~~~
About the author... 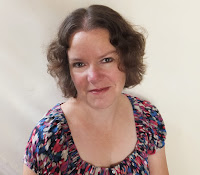 Kathleen McGurl lives near the coast in Christchurch, England. She writes dual timeline novels in which a historical mystery is uncovered and resolved in the present day. She is married to an Irishman and has two adult sons. She enjoys travelling, especially in her motorhome around Europe but home is Mudeford, where this novel is set.
SITE | TWITTER | FACEBOOK
~~~~~~~~~~~~~~~~~~~~~~~~~~~~~~~~~ 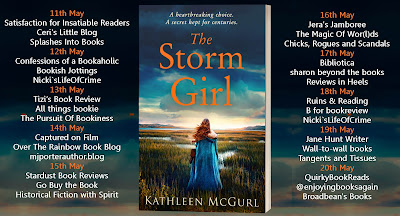