Hi there!
Wow, it's Friday already?  Where DID the week go?!
Though we've had a fun week here at Satisfaction for Insatiable Readers (in my opinion at least), I couldn't let it go without one more review for you to consider as an addition to your future potential read lists.  So if you're stopping through here from the Book Blogger Hop, welcome!  If you're a regular, welcome back!  Let's all gather round the campfire for a tale set in the past but written with enough creative flair to keep your attention held firmly on the present....today's book of choice is.... 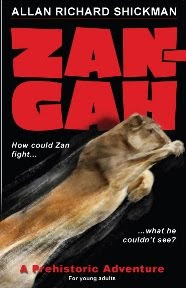 Zan-Gah is a brave, courageous young boy turned man who is on a noble quest...to find his brother.  Dael disappeared after a fight between them years ago and although it was assumed he was killed by the local wildlife, Zan-Gah isn't so sure.  It seems Dael is speaking to him in his dreams and feels very much alive.  Setting out on a quest into the unknown through hostile territories, he's risking his own life for the twin he's forever connected to.  Though all signs point to him being beyond reach, he never gives up hope. Will Zan-Gah reach Dael before it's too late?  More importantly...is it already too late?  There's more than death to consider when saying someone is "too far gone"...

The perfect example of the old adage...you can't judge a book by it's cover. Honestly!  Although the cover depicts a pivotal moment in Zan-Gah's life, it really left me desiring something more.  You know how it is, if you don't know an author or title, what is it that draws you in?  The title and the cover.  Would I have picked this book up off the shelf on a wander through my local bookstore?  Truth be told, probably not....unless I had HEARD about it and THAT'S what I love about book blogs, my own included.  You get to learn about books and authors that are new-to-you that you may not have considered previously not for lack of interest but for lack of knowledge.  I mean really, as much as we read and discuss books, can you honestly say that you know EVERY book out there that right now that you would enjoy reading?  Doubtful.  Anywho...back on track here.... 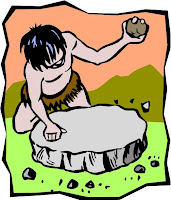 Despite the cover appeal or lack there of, what's of real importance in the end is the story.  How was it?  It was REALLY good! You get a taste of life when times were simpler. You caught or foraged for your meal, shared time with your family, and assisted the tribe with daily tasks....oh and fought for your life against wild animals that would love you to share...pardon, to BE...a snack, as well as other tribes that would do you and yours harm given then chance. Okay so perhaps it really wasn't simple, more like just as complicated as today but on a different more basic level.  The author does a great job of taking you back to prehistoric times in both descriptions and actions.  Though the journey is long and threat filled, he doesn't bore you with too many details but rather smoothly transitions his characters over a few days time to their next destination with the needed but limited travel details in between.

The characters are also a great part of what makes this story overall.  From the 'Wasp People' (dangerous in more than name) to 'the Hru' (a people of quiet strength but certainly able to defend themselves), Zan-Gah himself to Chul (his huge 'brick-wall' of a relative), you come to know and either care for or at least understand what they do and why they do it.  The ability to use very few words to convey strong emotions is also evident in this work and harnessed quite well.


***SPOILER ALERT*** (Okay, kind of a spoiler but on the small side...just had to warn you...)  There is one part in the book where events are being spoken of and Zan is telling Dael how happy their mother would be should he be alive since he has been feared dead (HA!  See I'm not going to tell you if he was or wasn't, but still gonna include the quote....hehe....) and Dael very convincingly and a bit on the creepy psycho side says:


*shivers*  Yeah, take it from me, it's delivered very straight faced and even toned in the book so definitely creepy....but see, that sentence is about 8 words and yet get right to the heart of the moment at hand; certainly speak to the author's skills.  ***END OF SPOILER***


Follow Zan-Gah and his family on a journey through a land wilder than most but with hidden areas of heart that beat louder than any warrior's drum. Recommended reading for YA fans though I can certainly see this becoming a favorite amongst male readers.  Signed review copy courtesy of Bonnie Lenz at Earthshaker Books.  (THANKS!)  For more information, please visit their website.

I love a good book with well written characters. Thanks for your recommendation.

Petty Witter: Agreed and your welcome! ^_^

I agree with you - the cover would not make me want to read the book! Glad to hear that it's good, though. I interviewed the author but I didn't get a chance to read his book.

Emidy: Yep, definitely good...will be reading book 2 very very soon. I think I remember that interview too...will have to look back at it to refresh. ^_^

Definitely not what I was expecting from the cover. Sounds interesting

Great review. I keep hearing good things about this one!

The covers totally turned me off of this series, but it actually sounds pretty good. Great review!