HI guys!
Welcome back to the place that loves exploring the world of literature one book at a time...Satisfaction for Insatiable Readers.

Today, we're stepping away from the usual teaser post for a glimpse inside the cover of a recent read of mine.  It's an ARC I agreed to review that falls into the category of "better in theory than in execution"...at least for this reader.  It stars the wife of the infamous creator of Sherlock Holmes in a murder mystery that will take her from the creme de la creme to the depths of despair and back again as she becomes the prime target due to her meddling.  Curious?  So was I.  Let us take a closer look.  Today's book of choice is... 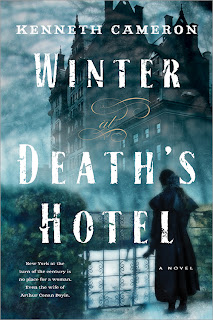 
New York, January 1896. Arthur Conan Doyle, the renowned created of Sherlock Holmes, arrives with his wife Louisa at the Britannic Hotel in New York for his first American tour. While Arthur prepares his lectures, Louisa becomes entranced by the vibrant, dangerous metropolis brimming with debauchery and iniquity around every corner. When a woman's mutilated corpse turns up in a Bowery alley, Louisa recognizes the victim as someone she's seen in the hotel. Obsessed with the woman's gruesome death, Louisa starts piecing together clues to reveal a story of murder and depravity—a story that leads back to the hotel itself and a madman who is watching her every move.

As I said, sounds FABULOUS in theory, but for this reader, it fell a bit flat.  Allow me to explain.

On the pro side of things, we have a female lead that is interesting enough, with morals to spare and more kindness in her heart for her fellow woman than can be fathomed.  She is desperate to not let this young woman's death fall by the wayside; in my mind, she was imaging her to be someone's daughter, sister, wife, etc...sad and yet so true.  I liked the idea of exploring life from the wife of an author growing in infamy and the plan to solve a mystery of her own choosing without said husband's aid.  (Believe me, he is none too helpful.)  I enjoyed her connection with Ethel, her handmaid, and Minnie, the spunky reporter she befriends.  Her mind was open to possibilities that others of her time were not and that assisted her in seeing beyond what was simply there in front of her face.  (Nice touch!)  Marching on...

The cast of male characters were distinct and yet played second fiddle to our femme fatales, a surprising turn of events, but most enjoyed.  A favorite among them?  Detective Dunne...nicknamed "Never" Dunne.  He may not be the quickest bloke nor something to especially appealing to look at, but he's thorough, accurate and out to get the one at the heart of these heinous crimes.  Speaking of those crimes, if you've an easily turned stomach, you might not want to read parts of this while eating.  Just sayin.  *ahem*

On the con side, I had a hard time tussling with the author's writing style, especially the sentence structures.  Was it simply the style of the times? Could be, but I've read Mr. Holmes' adventures before and found them less of a mouthful.  Also, I found myself skimming a section or two trying to move things along as we would get hung up here or there with overly descriptive passages about a certain locale in the city, or the layout of a room, etc.  Some of these play bigger parts later in the story, yes, but at the time, they stalled things.  Last but not least, there was also a preoccupation with sexuality...and not just from the Butcher.  His/Her focus I understand; they were the killer and they were proving a point....however, Louisa's many bouts with "self-appreciation" were, well, to a point, unnerving.  I mean, she wasn't perverse or anything, but it just seemed awkward.

In conclusion, there is a case to be made for and against this particular fictional adventure of a real life author's wife turned sleuth.  Where will you plant your fandom flag?  Well now, that's entirely up to YOU now isn't it?  The facts have been laid before you as I saw them, but the true FINAL ANSWER is in your hands.  I do however recommend this one for adult readers and beyond due to some content as previously mentioned.

ARC for review courtesy of Liz at Sourcebooks.  (THANKS!)  For more information on this title as well as their growing catalog of literary wonders, be sure to visit them online, friend them on Facebook, pin them on Pinterest, or follow along on Twitter.  This title was released earlier this month and should be available now on a bookstore shelf near you.

Sorry to hear it fell flat. It does have an amazing ring to it. :) Thank you!