Tibby and His Friend's Big Secret by Carl Kegerreis

Hi guys!
Welcome back to the place that aims to please readers of all ages and spark their imaginations into full gear...Satisfaction for Insatiable Readers.

Today, we're featuring a Children's Fiction title from a newish author team.  Yes, I said team.  How so? Well, it's from one particular gentleman, but his granddaughters had a lot of say in it as well...and according to book's end, the next tale to come.  Pretty cool, right?  I thought so.  I mean having family involved is bound to make the writing even more fun than a task, plus it gives you instant feedback from the age group your targeting.  Anywho, let's see if we can't uncover a little more about this curious read.  Today's book of choice is.... 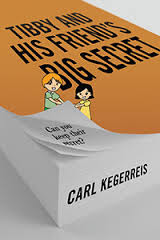 Tibby and His Friend's Big Secret
by
Carl Kegerreis


Tibby and his dog Starber-a longhaired shepherd who is brave,smart,and talented-live in a rural
Midwestern town, and along with their friends, they can always find fun and adventure. But
things get very strange when Tibby meets Coley and Darnell, a sister and brother who’ve moved
into the creepy mansion down the road, and it isn’t long before Tibby and his friends discover an
amazing secret...
Inspired by the author’s first love—Big Red, a stray Irish setter he disentangled from a cornfield
fence and subsequently adopted—Tibby and His Friends'Big Secret is an exciting tale for boys
and girls and animal lovers everywhere.


To answer the question posed....yes, I can keep their secret, even while writing this review!  No, my skills aren't that fabulous to tell you everything and nothing all at once.  No, I'm not going to avoid the issue completely because it's more fun to talk around things in a case like this than label the elephant in the room.  I am however going to admit to the fact that while I can keep their secret, it's not completely for a lack of trying to share it, but rather a case of still trying to figure everything out.  Allow me to explain.

The initial chapters introduce us to Rex, Tibby and his dog Starber.  They aren't the coolest of the cool but they aren't complete social outcasts either, except when it comes to the class bully (that ends up not actually being a bully).  Tibby obviously avoids him when he can, but such is life, it doesn't always play in his favor.  Push comes to shove and a dare is made for the overly confident lad (named Fogel) to stay overnight in a local "haunted house"....only it's not exactly haunted as in the classic sense, and Tibby knows it.  One things leads to another and ding dang dong, the bully is bullying no more.  But what could make a lad like that stand down and so immediately?  The secret lies in the house that is...but soon will not be.  Confused?  So was I...

After the original sequence of events, things change almost on a chapter to chapter basis (good because it keeps things flowing, unusual because, well, you'll see.).  At this point, it reminded me of the movie Groundhog Day; you know, where the same day happened over, and over, and over until things were set right?  Well, the difference here is A) it's not Groundhog Day, B) time still DOES pass, C) the same events don't transpire in exactly the same way nor is the location the same each time (they are still in their little town, but houses, rivers, etc are different), and D) it's never actually made clear what's real, what's not, and what simply might be an effect left over from a certain "person's" home machine (the latter is my suspicion).  Things do get accomplished.  Secrets are uncovered both BIG and small.  Friendships are made and mysteries...well, they are still left mysterious to some degree, but that part could be in preparation for the next book in this family written series, Tibby and His Friend's Top Secret.

In conclusion, while I can see this being popular with boys and girls who love a good riddle, mysterious creatures and the chance to be one of the many keeping a secret much bigger than themselves, I'm not certain it will score a home run with everyone...including me.  I'm one of those odd readers that likes things either neat and tidy or at least made clear and honestly, I'm still peering through a muddle of mud on this one.  Maybe I need some guidance from Elock, or Roscoe on this one; or perhaps a trip through the waterfall.  (^_^) 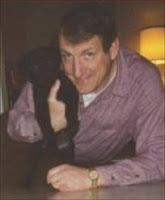 About the author...
Carl Kegerreis attended Ball State University and was drafted into the Army his junior year. He trained Army sentry dogs and a German shepherd police dog for the Baltimore and Ohio Railroad, achieving the position of Division Chief and retiring after 34 years. Kegerreis lives in Ohio with Sandra, his wife of 47 years. They have three children and five grandchildren.


Review copy received courtesy of author Carl Kegerreis.  (THANKS!)  For more information on both the title and the author, seek out his page on Amazon and GoodReads.  This title is available now in both paper and ebook forms via Outskirts Press.

Loving that they aren't the coolest of the cool as it makes them all the easier to relate to.