Truth IS stranger than fiction: Literary Rogues by Andrew Shaffer

Hi guys!
Welcome back to another week here at Satisfaction for Insatiable Readers....where life throws us lemons and we say, you need better aim!  ^_^

What can I say?  Life has definitely been making me its bi....I mean, whipping girl here lately.  No worries, it'll all work out, but I can't say with more enthusiasm, the sooner the better, PLEASE!  So, what's with my attitude today?  Use to the meek and demure side of my writing as opposed to the sassier me of the moment?  Gotta be the recent reading material, especially today's title.  It's a work of non-fiction starring the writers you know and love (or loathe, after all...not every author or author's work is for everyone despite how much they wish it to be so) at the very roots of their personal selves.  Curious?  Oh, it gets better, just hold off on sharing it with the kiddos until they're older, okay?  Without making you squirm in wait for a lengthier time, here's today's book of choice.... 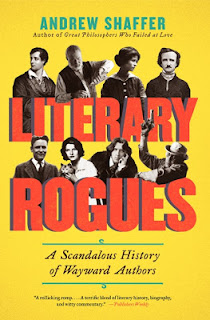 
A Wildly Funny and Shockingly True Compendium of the Bad Boys (and Girls) of Western Literature
Rock stars, rappers, and actors haven't always had a monopoly on misbehaving. There was a time when authors fought with both words and fists, a time when poets were the ones living fast and dying young. This witty, insightful, and wildly entertaining narrative profiles the literary greats who wrote generation-defining classics such as The Great Gatsby and On the Road while living and loving like hedonistic rock icons, who were as likely to go on epic benders as they were to hit the bestseller lists. Literary Rogues turns back the clock to consider these historical (and, in some cases, living) legends, including Edgar Allan Poe, Oscar Wilde, Zelda and F. Scott Fitzgerald, Ernest Hemingway, Dorothy Parker, Hunter S. Thompson, and Bret Easton Ellis. Brimming with fasci- nating research, Literary Rogues is part nostalgia, part literary analysis, and a wholly raucous celebration of brilliant writers and their occasionally troubled legacies.

Basically it's a who's who of the lit world in it's most basic and brash form.  It shares who knew who from era to era, exposing the SERIOUS "drinking of the punch" (if you know what I mean) that was more rampant then than now, while exposing both the brilliance and debauchery that devoured every age.

Seriously, you'll never see some of these histories coming...well, in the beginning; as they progress, you kind of see where SOME are going.  The tendency towards excessive drinking, narcotic use, loose relations and other reckless behaviors was astounding...and yet, you can't help but be in awe of all that WAS accomplished as well as their staying power whether or not they initially achieved any fame.  I learned that Ernest Hemingway wrote The Sun Also Rises after being rather impressed with F. Scott Fitzgerald's The Great Gatsby.  Fitzgerald was reckless to say the least but profoundly in love with his wife, even as she suffered through the devastating effects of schizophrenia.  Dylan Thomas may have spoke of not going gently into the sweet night, but he did so himself thanks in part to his tendency towards liquid indulgence.  William S Burroughs loved his Mo...rphine.  John Berryman had a flair for the dramatic.  Mary Wollstonecraft Shelley received support for her writing endeavor from her husband and fleshed out the infamous Frankenstein at only nineteen years of age.  Edgar Allan Poe lost almost all his family to tuberculous...and finally, the Marquis de Sade was one twisted soul.

With every turn of the page, you learn something new, something curious, something sometimes rather unnerving but always interesting that keeps you glued to the page.  The writing is clear and concise making a point of befriending each authorly soul covered while exposing their darkest secrets.  Though not for the faint of heart nor those entirely too easily offended (by others actions spoken of in observation, not literal words or first hand experiences), this was a great read indeed.  I found myself intrigued by both the stories of names I knew as well as those I was just discovering, equally and in full measure.  If you liked the sound of what you've read thus far, I think you will be too...and if you need a smidge more convincing, check out this excerpt...it worked for me.

Review copy courtesy of Liz at HarperCollins Publishers.  (THANKS!)  For more information on this title as well as their full catalog, be sure to visit them online, or follow along on Twitter.  This book was released earlier this year via Harper Perennial and should be available now on a bookstore shelf near you.

Sounds like an interesting read, thanks for the recommendation and the use of the word debauchery which has to be one of my favourite words.