Hi guys!
Welcome back to the place that aims to please the reader in you every day of the week with a satisfying bookish delight, Satisfaction for Insatiable Readers.

Today, we're going behind the cover of a recent spotlight title featured here on the site, that places front and center some of the everyday issues teens deal with...and how help can be found in the most unexpected of places.  Via Egmont USA and  Media Masters Publicity, today's book of choice is... 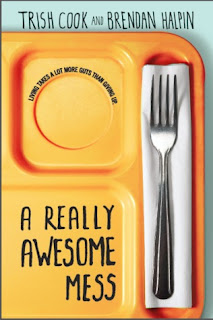 A Really Awesome Mess
by
Trish Cook and Brendan Halpin


Two teenagers. Two very bumpy roads taken that lead to Heartland Academy.
Justin was just having fun, but when his dad walked in on him with a girl in a very compromising position, Justin's summer took a quick turn for the worse. His parents' divorce put Justin on rocky mental ground, and after a handful of Tylenol lands him in the hospital, he has really hit rock bottom.
Emmy never felt like part of her family. She was adopted from China. Her parents and sister tower over her and look like they came out of a Ralph Lauren catalog-- and Emmy definitely doesn't. After a scandalous photo of Emmy leads to vicious rumors around school, she threatens the boy who started it all on Facebook.
Justin and Emmy arrive at Heartland Academy, a reform school that will force them to deal with their issues, damaged souls with little patience for authority. But along the way they will find a ragtag group of teens who are just as broken, stubborn, and full of sarcasm as themselves. In the end, they might even call each other friends.


The title is a perfect fit for this story...in the best way possible.

Justin and Emmy, along with the rest of the Heartland crew, lead you on a journey to the heart of the matters they couldn't acknowledge themselves but with a little help from their new found friends, healing is at hand.  It may not be instantaneous, or complete as we would hope, but it is what's right for them and when you get down to it, that's what really counts.  Justin is a hard nut to crack, especially since he likes to crack some....um, jokes, and they are usually more of the colorful variety.  The question is WHY.  He's not the most experienced, literally or in his therapy group, nor the one with the most extreme behavior and yet parental concern (or lack thereof...something to think about) has landed him in the place that's all about focusing internally and discovering just what that little voice is trying to tell you.  In short, not the sort of thing most guys are lining up to experience, but if he has any hope of achieving true personal freedom, not just from their levels, he may have to put his listening ears on.  Then again, maybe not.... 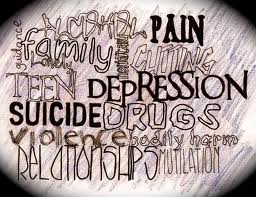 Emmy is in for a love gone wrong with self made repercussions that have her trying to mold her body into something that is less body and more corpse...but that's not the ONLY reason.  Just like with everyone else, what's on the surface is not all that's there.  Deeper seeded issues and insecurities are what really need to be tossed in the rubbish bin...but if home couldn't penetrate her psyche, does Heartland have a hope?  Again, not in the ways you might expect, but a break through is definitely in her future.  You see, Heartland isn't just about professional staff leading you through unending group therapy and one-on-one sessions, but a place where the care is continual as is the attention.  It works with a round the clock rotation of those both paid to care and those that have been there, made it through that and are willing to share what they've learned along the way.  The path to acknowledging the root of their problems, digging up the festering mess, and planting something new is different for everyone but friendship goes a long way in laying the foundation.

The alternating chapters made it easy to follow the story while presenting it from all sides, a great advantage considering their viewpoints could differ so drastically of the same situation.  It was great to see their problems from the outside looking in as well as the inside looking out.  It made the connections with the characters easier to build and nurture even as we expanded our cast of characters.  What's that?  Extra characters don't bother you?  Well, these aren't just "extras"; they've got a story to share and a part to play as well.  They begin by teaching the newbies about life on the inside, but continue the "lessons" by showing them what they can achieve when they work together despite initial differences, what listening to their hearts can truly uncover, and that there are those that are truly worthy of their trust...and love.

In conclusion, a much deeper tale than the surface portrays filled with love, confusion, long roads and pilfered pigs (in Dora costumes no less!  That's a story you'll uncover on your own...).  It's a book that will resonate with teen readers for the issues they may be dealing with themselves or see in others around them while still reaching adults on another level altogether.  You'll laugh, cry and experience a few feelings in between that may require new names, but it's worth the ride from start to finish.

ARC for review courtesy of Casey at Media Masters Publicity and Egmont USA.  (THANKS!)  For more information on this title as well as their full catalog, be sure to stop by the publisher's site or follow them on Twitter.  This title was released the end of July and should be available now on a bookstore shelf near you.

As I finish typing this post, my Pandora has chosen to play A Thousand Years (Part 2) by Christina Perri from the Breaking Dawn soundtrack...and you know what?  It fits this finale of this book perfectly.  Don't believe me?  Well, you'll just have to read it to find out.  ^_^