And on the Seventh Day...Ads for God by Tony Vanderwarker

Hi guys!
Welcome back to the Sunday edition of Satisfaction for Insatiable Readers.
What's that?  What's so different about the Sunday edition?  Ah, well you see usually I go with a quick cartoon or funny picture to brighten your day, but not this week.  This week, we're talking about the big G-O-D and the other deities are even making a cameo.  Wonderful, isn't it?  Hmm, interesting is more the word I would have chosen, but before we split hairs let's properly introduce the title on the menu.  Today's book of choice is... 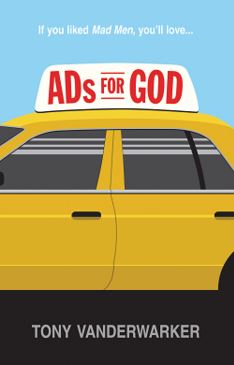 Ads for God
by
Tony Vanderwarker
9781942882008
Cedar Creek Publishing
About the book...
Dinsmore “Dinny” Rein is 55, divorced and demoted, since he’s been freezing up in meetings at his Chicago ad agency. At the company, run by the loathsome Steve Sinkle and sexy creative director Ester, Dinny is derisively referred to as “Noodles” because one of his two remaining clients is a pasta company.

Exhausted and irritated, Dinny agrees to meet the baritone who keeps calling him on his cellphone. The old man says he’s God and he needs to get people back to church. He wants Dinny to do an ad campaign. Dinny is skeptical at first, but he then learns that $10 million has shown up in the agency’s bank account.

The drama heats up as Sinkle and Ester work behind Dinny’s back to create an alternate campaign and win God’s favor. Worse still, God proves to be less than all-powerful, with a slippery hold on the human forms he inhabits, and campaign monies provided through questionable means 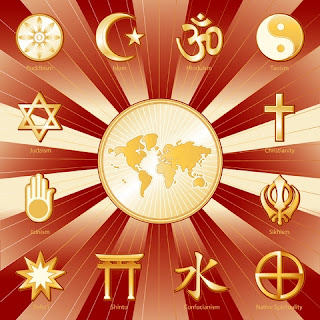 **Please note, no offense is meant to anyone's beliefs by anything said below.  It is merely a review of a Fiction novel sub categorized as Humor/Satire**
Now you see why I chose today as the day that I featured this title?
Yep, it's all about the big man upstairs...
...coming downstairs, taking up residence in several odd, interesting, and unusual characters (including a dog!) in order to gain Dinny's assistance in upping his popularity among the masses (both of this world and beyond...more on the latter, you'll have to discover on your own).  What better way to do it than through advertising?  Am I right?  Huh, am I?
*-*
Does it provide for humorous situations?
Certainly!  Everything from Dinny rediscovering the power of one (as in himself...yeah, double doors required for HIS entry into a room) to running from a less than on the up-and-up group of "moneymakers" that have been swindled out of millions of dollars...all thanks to Him...leading eventually to a campaign that would have most of us wondering WTH?!  (I can't explain as it would spoil the surprise, but trust me...the moment is worth it and will have you loathing a particular character more than you already do.)
Does it provide for a unique story?
Again with the virtual nodding in agreement.  I can't say that I've ever read a book quite like this one. My favorite parts included Dinny's initial meeting with Him (think old guy in Bermuda shorts and sandals in the winter), his lady love's freak out moments when He would speak through Dinny (apparently it was right up there with a bad ventriloquist act), and the ending (no...not because it was the end) with its little twist.  You know the old joke (or maybe you've seen it somewhere) with the Avon lady going door to door (not in my time either, but I've heard it mentioned)?  How about... Hello....God calling! 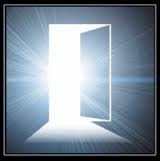 Drawing things to a conclusion, though not a high rating on my own list of reads, it did have its moments and was certainly memorable.  To me, the writing flowed well, and the plot was creative, but the story dragged its feet.  There were multiple parts that could have been cut and you still wouldn't have missed a thing.  Does that mean that I recommend it any less to you?  No....just go in with your eyes and your mind wide open.  There's definitely no room for hardcore "Bible thumpers" here....unless you have a HEALTHY sense of humor (and are an adult reader...due to topics discussed and limited content).
~~~~~~~~~~~~~~~~~~~~~~~~~~
About the author... 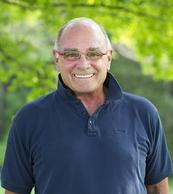 Tony [Vanderwarker] was a creative director at ad agencies in Chicago and New York before starting his own firm which he grew into one of Chicago’s largest before leaving the business and moving to Virginia to fulfill a dream of writing novels.

His first novel, Sleeping Dogs, was published in 2014 along with a non-fiction book, Writing With The Master, about crafting the novel with his friend and mentor, John Grisham.

Later in 2015, Tony will be publishing a second comic novel, Say Something Funny and he has two other novels and a non-fiction book in the works. “I resist being pigeonholed as a writer,” Tony explains, “I enjoy crafting thrillers, have a blast doing comedy and revel in the honesty of writing memoirs.”

Another of Tony’s passions is rural preservation, smart growth and the local food movement. Living on a farm outside of Charlottesville with his wife, four dogs, four horses and a Sicilian donkey named Jethro, he says “Piedmont Virginia is so gorgeous, it has to be kept that way for ourselves and future generations.

Special thanks to Penny at Author Marketing Experts, Inc. for the review copy as well as the chance to bring this book to all of you.  (THANSK!)  For more information on this title, the author, the publisher, or those promotions on the horizon, feel free to click through the links provided above.  This title is available now via Cedar Creek Publishing, so be on the lookout for it on a bookstore shelf or virtual retailer of your choosing.
Until next time...happy reading!
﻿
Posted by Gina at 12:30 AM