Today, we're joining a blog tour already in progress courtesy of iRead Book Tours that stars a creative new Middle Grade Science Fiction series that's sure to attract some attention, if not for the story than certainly for the illustrations.  Coming at you about a million times faster than the speed of light, it's time to meet today's eBook of choice... 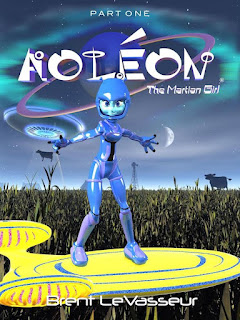 About the book...
Mars wants our cows (yes, cows!) and they're sending an invasion fleet to take them from us. Only Gilbert and Aoleon the Martian Girl stand in their way!

Gilbert always longed for adventure but now that he has it, he's not sure that it's everything it's cracked up to be. Ever since the night he met Aoleon the Martian Girl sitting in the middle of a crop circle in Farmer Johnson's field, it's been nothing but one wild ride after another.

From fighting off swarms of giant killer robots to dealing with strange aliens from another world, never mind trekking across the vast Martian desert in order to skyboard deep into the center of a (hopefully!) extinct volcano, Gilbert's had his hand full just trying to keep up with it all. And now it's up to him and his new friend, Aoleon, to face off against the evil Martian overlord and keep our cows safe at home where they belong. 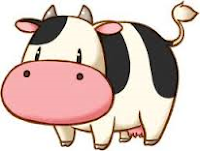 You read that right.
They're coming...and they're after our COWS.
*-*

I'm sorry, I just couldn't resist!
It seems absurd but there's actually a "good" (term used very loosely) reason behind it, though I still couldn't stop myself from laughing when those unfortunate bovines got caught in the zero-gravity fields.  Poor cows, but SO funny!  *ahem*  Anywho...there's more here than floating mammals that fall at just the right moment on just the right people...

This is the story of one Human boy and one Martian girl that are destined for more than what they can imagine.  Let's talk about the Terran (the term they affectionately give to Humans) boy first.  Gilbert is either one VERY lucky or unlucky fellow, all depending on how you look at things.  I mean, there he is wishing for a way out of his humdrum life filled with parents that can't seem to stop arguing, and dreams that seem just out of his reach.  Then BOOM!  Out of nowhere, or rather out of space and time,  a UFO lands in his neck of the woods...err, farmlands, bringing an adventure that's out of this world.  Of course that adventure comes with a few side affects like having your neighbors shoot at you for trespassing, having to out maneuver the US Air Force that's right on your ship, having nanites injected into you so that the special space suit you borrow will help you hide among the Martians, and oh yeah...you're now on the hit list of the guy who wants to rule the universe.  Yep.  BIG adventure also equates to BIG danger.  *gulp*  Good thing he has an expert on his side, right?

That expert would be Aoleon, pronounced A-OH-LEE-ON (..get it?  Sorta like alien only French sounding in an outer spacey way...).  She's a master flight instructor and top expert in her field....okay, not really.  She's actually still practicing for her flight exams and pretty much a kid just like Gilbert, but she's got talent to boot and confidence to send her to the moon and back.  She'll need it to because she's on the very same list that Gilbert's on and let's not forget if the forces-that-be figure out that a Human boy is running around their part of the galaxy, she may not survive long enough to worry about the other list.  All I gotta say is this duo is in for a world of trouble but I do believe that side by side, they've got more going for them than meets to eye. 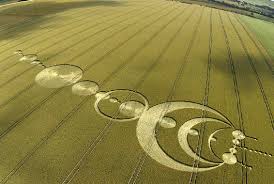 So, we've talked story, and we've met some of the characters (though I did leave out farmer Johnson and his dog but truly the latter is more memorable -- and cuddly-- than the former, even touching the heart of our unearthly visitor), now let's speak to those illustrations.  Don't take that the wrong way, this is in no way a picture book; it sits firmly on the Middle Grade shelf as advertised.  The pictures are simply another means to share the story...and what a means they are!  They certainly make an impact, much like those non-corn-harming-crop-circles Aoleon was having fun with.  They add another dimension to the tale with smooth lines, bright eye catching colors, and seriously FUNNY images!  Well, not all of them are funny...I'm referring to the cows again.  ^_^

All in all, a great start to what seems to be a promising series that I think will be a perfect fit for girl and boy readers alike.  (It's not often that combination occurs, especially within this particular age group.)  Whether you're a hardcore sci-fi fan or merely a dabbler (*raises hand*), there's something here to intrigue, delight, and entertain.

Having seen this series featured on several other blogs I'm glad to read your thoughts on it. Great review, I love the idea of the martian character being a female.