BLOG TOUR: Aoleon the Martian Girl: The Luminess of Mars by Brent LeVasseur

Today, we're closing out the week with a review of the second book in a Middle Grade Science Fiction series that you were recently introduced to.  Remember Aoloen the Martian Girl:  First Contact?  Well, if you liked that, there's plenty more where that came from including today's featured title!  Ready or not, make way for the blue girl who knows how to hold her own against the opposing forces of the universe and the young Terran man who's tagged along for an adventure he never saw coming!  Ladies and gents, today's ebook of choice is... 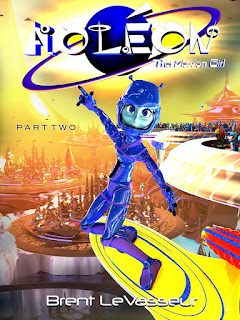 Aoleon the Martian Girl:
Part 2 - The Luminess of Mars
by
Brent LeVasseur

About the book...
Aoléon and Gilbert receive a special mission from PAX, a wanted criminal and leader of the Martian resistance movement to investigate the Luminon of Mars, who he suspects is planning an invasion of Earth to steal its milk cows. Gilbert has an encounter with the Luminess (the mate of the Luminon) and discovers something strange about her during a procession, and the duo are chased by the Royal Paladin Guard. At Aoléon’s home, Gilbert meets Aoléon’s family, her sister Una, mother Phobos and father Deimos as well as her overzealous pet Zoot. He is also introduced to Bizwat, a covert operator and Procyon Commando, who uses his Saturn Pizza delivery job as a cover. Gilbert then gets to visit the Martian Space Academy (Aoléon’s school) where he encounters Aoléon’s nemesis, Charm Lepton and her friend Quarkina, as well as receiving a history lesson on the Martian people by Plutarch Xenocrates. After class, Gilbert and Aoléon get to train in zero-G and Gilbert is treated to a Psi-ball match between Martian Space Academy and Martian Science Academy.

If it sounds out of this world, good....because it is!

You can't help but fall under the spell of these two as they face down everything from mean girl wannabe's (aka Charm and her cronies) to the power behind the ruler who is most DEFINITELY hiding something to a galact laden feast that while sounding odd is actually somewhat tasty.  Oh, and did I fail to mention that they are getting closer to finding out what Pax meant when he told them both (in the last installment) that they will play an integral role in the events about to unfold?  Silly me...well, they are and while it isn't clear what that is exactly yet, the trials and tribulations they are put through in the mean time only serve to strengthen their bond.

I love how the author made the unusual assortment of classmates easier to relate to by giving them humanoid issues and problems.  For example, Charm and her envy of Aoleon's flying abilities despite not having the best equipment available in the galaxy.  Then we have the two squid type students (forgot their exact origin...oops!) that suffer the fate of many of new/different student....bullies.  *sigh*  Guess it goes to show you kids can be mean in any atmosphere (or in none at all!).  Don't worry, they're okay after all and some of the bullies actually get their breakfasts served back to them later on (picture an anti-gravity type chamber and uncontrolled spinning).  Next on the love list would be the continued friendship of Aoleon and Gilbert.  No matter what gets thrown in their way, they find a way to overcome it and turn it around.  For her, it's just another walk through space but for him, it's a skip through a minefield. His secret isn't so secret anymore (the fact that's he's a human boy from Earth) and yet those in the know have taken it exceedingly well.  Can't say that I'm certain that will be the continued pattern though as there are darker forces shadowing the pair.  I for one though can't wait to find out what's next....

So, in conclusion, another great addition to the series that will appeal to both male and female readers from the Middle Grade set and beyond.  There's flying and sports, jealousy and understanding, and secrets on an intergalactic level.  What more could you want? Oh, I get it...you want to try the galact pizza.  Well, be my guest...just tell Bizwat we sent you or he may go all ninja on you.  Just sayin'...

The more reviews of this I read the more I like the sound of it. Thanks for sharing your thoughts on what sounds like a fun read.