The Color of Clouds by J.C. Whyte

Whew!  I don't know about you, but I've had a BUSY week.  Between work, reading, blogging, and life, I've felt a bit like a hamster on a wheel.  No worries.  Still enjoying the ride...just trying to make sure I keep up!  *keeps running*  Anywho...

Today, we're diving into an author's work that we've featured before but in a whole new arena.  It's her first adult Fiction novel and you've got a front row ticket to find out what it's all about.  So, are you game?  Good!  Then ladies and gents, here comes today's eBook of choice... 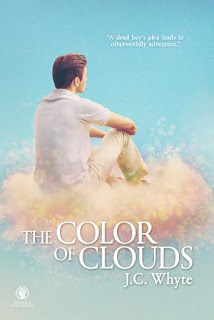 About the book...
Pedro’s on a mission. But not your everyday, run-of-the-mill type mission. Because Pedro is dead.

Spirit guide Pedro normally busies himself with conveying messages from departed loved ones through a psychic named Gwen. But when he encounters a recently deceased teenager, the boy’s anguish just about breaks Pedro’s heart. So the spirit guide decides to try and help this boy. Yet meddling in the affairs of the living is a troublesome business, as Pedro soon discovers.

Nevertheless, he convinces Gwen to take an ocean voyage, and that’s when the trouble begins. Within days of leaving port, two passengers on the cruise ship fall into a mysterious coma. Gwen seeks Pedro’s help to restore these passengers, but natural as well as unnatural obstacles keep getting in the way. And by the time the ship docks in Honolulu, the still-living are flat out scrambling for their lives!

Things aren't always what they seem...
...is the UNDERSTATEMENT of the century in reference to this book. 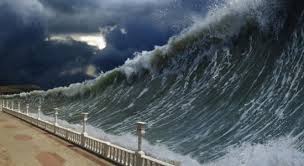 You come thinking you're getting a simple story from start to finish and end up with a whole symphony of characters and story lines to follow up with.  There's murder, mayhem, mysterious light shafts, psychics, cover ups...and that's before Mother Nature joins the hubbub!  You may not know whether you're coming or going when trying to decipher the curious experiments that kicked off this whole mess, but the author keeps you in check along the way so as not to lose a moment of the story. Now, speaking of that story...

What we start with is not where we end up.  Confused?  Don't be; it makes sense in the end.  The cruise starts off nice enough, friends are made, memories are shared, and then BAM!  People start mysteriously falling after being caught in this floor to heavens light shaft.  It sounds crazy and yet what's even crazier is that though the people seem lifeless, they're minds are actually going a mile a minute...case in point, Sylvie and Ernst.  Despite not bouncing back to their bodies like the younger set, nor being able to answer those around them (in the physical world at least), their lack of anchor in reality doesn't keep them down.  If anything, it pushes them on to seek out those that can help and maybe just maybe discover those secrets hiding in plain sight.

Though the story deals with many characters lives and fates, I simply adored Sylvie and Ernst both in the spirit and the flesh.  They were an imperfect match that complimented each other perfectly.  She was sassy and free spirited to his loyalty and steadfastness.  The yin to the yang, and any other two part puzzle comparison you can think of, served as a great stabilizing point in a story that could have wandered like the clouds they traveled among, but did not.  Their playful banter helped them stay together after passing through "the light" (and no, it's not the light that you're thinking of with the tunnel leading to gates of one sort or another) and kept them on their toes (if they could have stood on solid ground) while they tried to relay to the living who was actually behind the bloody murder on the ship.  (Dun dun dunnnnnn!)

In conclusion, a curious story for certain with enough heart, and wit to keep you coming back for more.  While the scientific side of it gets a tad deep at times, you can always trust those characters that aren't in the same field to lay it out more simply so everyone can grasp the situation.  The ending comes at you from nowhere connecting some dots you may have missed along the way, but trust me.  It's SO worth it.  What color would the clouds be around me by book's end?  Why I do believe some combination of blues and yellows.  I wonder what YOURS will be? 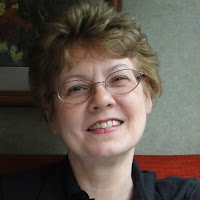 J.C. Whyte discovered her love for writing while still in elementary school, creating children’s stories. But as an adult, J.C. had to face the harsh reality that such writing seldom pays the bills. So she earned degrees in both Journalism and Communications, and then turned to Public Relations, where for ten years she focused her creative energies into feature writing.

After marriage, kids, several more degrees and occupations (including stints as a travel agent and paralegal), J. C. entered law school. While there, she became a columnist for the school newsletter and later, one of her humorous articles was even published in The National Jurist.

Graduating and passing the Bar, J.C. realized within a few short years that creative writing was still what made her heart sing. So now, as a grandma, she has returned to where her life’s calling began, beginning in 2013 with publication of her children’s book Karmack.

Special thanks to author J.C. Whyte for the eBook for review.  (THANKS!)  For more information on this title, the author, the publisher, or to pick up a copy to call your own, be sure to click through the links provided above.  This title was released March 2015, so be on the lookout for it at a virtual retailer of your choosing.

Sounds like there are many threads to this story, many of which appeal to me. And I really like the cover.