Today, we're shining the BOOK SPOTLIGHT on a title that could very well be your next must read via Partners in Crime Virtual Tours.  It's the second release in the Coleridge Taylor Mystery series and from the sound of things really packs a punch.  Ready to get down and dirty with a murder mystery begging to be solved?  Ladies and gents, today's featured title is... 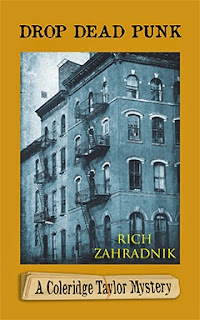 About the book...
Coleridge Taylor is searching for his next scoop on the police beat. The Messenger-Telegram reporter has a lot to choose from on the crime-ridden streets of New York City in 1975. One story outside his beat is grabbing all the front page glory: New York teeters on the brink of bankruptcy, and President Ford just told the city, as the Daily News so aptly puts it, "Drop Dead." Taylor's situation is nearly as desperate. His home is a borrowed dry-docked houseboat, his newspaper may also be on the way out, and his drunk father keeps getting arrested.

A source sends Taylor down to Alphabet City, hang-out of the punks who gravitate to the rock club CBGB. There he finds the bloody fallout from a mugging. Two dead bodies: a punk named Johnny Mort and a cop named Robert Dodd. Each looks too messed up to have killed the other. Taylor starts asking around. The punk was a good kid, the peace-loving guardian angel of the neighborhood's stray dogs. What led him to mug a woman at gunpoint? And why is Officer Samantha Callahan being accused of leaving her partner to die, even though she insists the police radio misled her? It's hard enough being a female in the NYPD only five years after women were assigned to patrol. Now the department wants to throw her to the wolves. That's not going to happen, not if Taylor can help it. As he falls for Samantha--a beautiful, dedicated second-generation cop--he realizes he's too close to his story. Officer Callahan is a target, and Taylor's standing between her and some mighty big guns.

Sounds pretty low down and dirty to me.
I mean, no one was expecting the "punk" to be a good kid...hence the term punk being used...and yet things aren't always as they seem.  Curious who is behind the killings and why they are making a female cop they're next target.  If you're up for this type of read, check it out and let me know what you think! 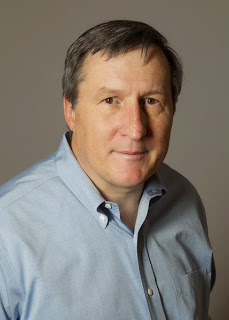 Rich Zahradnik is the author of the Coleridge Taylor Mystery series from Camel Press. Last Words is the first novel in the series and was published Oct. 1, 2014. Drop Dead Punk will come out Aug. 15. He was a journalist for 30-plus years, working as a reporter and editor in all major news media, including online, newspaper, broadcast, magazine and wire services. He held editorial positions at CNN, Bloomberg News, Fox Business Network, AOL and The Hollywood Reporter, often writing news stories and analysis about the journalism business, broadcasting, film production, publishing and the online industry. In January 2012, he was one of 20 writers selected for the inaugural class of the Crime Fiction Academy, a first-of-its-kind program run by New York's Center for Fiction.

He has been a media entrepreneur throughout his career. He was the founding executive producer of CNNfn.com, a leading financial news website and a Webby winner; managing editor of Netscape.com, and a partner in the soccer-news website company Goal Networks. Zahradnik also co-founded the weekly newspaper The Peekskill Herald at the age of 25, leading it to seven state press association awards in its first three years. Zahradnik was born in Poughkeepsie, New York, and received his B.A. in journalism and political science from George Washington University. He lives with his wife Sheri and son Patrick in Pelham, New York, where he writes fiction and teaches elementary school kids how to publish the online and print newspaper the Colonial Times.

Special thanks to Wendy at Partners in Crime Virtual Book Tours for the chance to bring this promotion to you.  (THANKS!)  For more information on this title, the author, the publisher, or those tours on the horizon, feel free to click through the links provided above...or check out the other sites on this tour RIGHT HERE!  This title is set to release AUGUST 2015 via Camel Press, so mark your calendar or pre-order your copy today!

Thanks so much for shining the book spotlight on this 2nd in series mystery! Sounds like an interesting read.

Yes I will jump right into this beauty. Thanks for the insightful review. Believe me it is. great to know there is somewhere and something so wonderful and dependable when we feel the need for that good read.

Thank you for showcasing my new novel. I'll be checking back to see if your readers have any questions.
Best,
Rich

Ah! The punk is dead. Ha! Very fun title. I haven't read the first one but it sounds interesting.