It's summer, and the new books keep rolling in like the waves on the ocean shore.  Today's title is set for a splashy book birthday TOMORROW, but we're here to chat about it today...sounds good?  I thought it might.  ^-^  So, grab yourself a chair, beach blanket, or cushion, as we get down to business with a gal who's figured out how to put a price on company, in a good way!  Our ebook of choice is.... 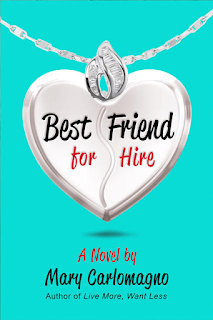 About the book...
Need someone to talk to or a friend to lean on?
Call Best Friend for Hire.

I am here for you.

Jersey Girl Jessie DeSalvo has her dream job at one of New York’s top publishing companies. After ten years of hard work the day of her big promotion has arrived. Unfortunately, her company has other ideas. Instead of a corner office, Jessie is handed her pink slip.

Left with little more than her cell phone and an unusable contact list, Jessie retreats to less-than-fashionable Hoboken, New Jersey, to figure out her life—and deal with the attentions of her loving but inquisitive Italian-American family. Then she accidentally stumbles into a career as a professional best friend—by helping friends and strangers straighten out whatever is wrong with their lives. Her jobs include planning the New Jersey wedding of the year and saving a bankrupt rock club in town. Soon, things get complicated when she falls in love with the club manager—and promises an appearance by Bruce Springsteen.

In the end, Jessie realizes that not even “The Boss” can make things right—and that she needs to become her own best friend to be truly happy.

So begins the tale of Jessie De Salvo...former publishing tycoon in the making, turned out when times got tough, but this gal turned tough on its ear and got her just rewards...in time.  You know the old saying, anything worth having is worth working (or waiting) for...it definitely applies here, too.  Nothing comes to Jessie on a silver platter, she has to make her own way to the top and though that "mountain peak" may look different than your own, it doesn't make it any less astounding to reach it.  I admired her gumption in following her new dream despite the setbacks (and lack of actual payment) that kept being dropped directly in her path.  It was definitely a cool idea with actual application in our own reality because let's face it...it's HARD to actually cultivate a living, breathing friendship sometimes!  Life is busy, thus so are we, and while time spent with those we feel a closeness with is grand, actually having the time to do it is hard to come by.  With Jessie's business, your perfect friend time is whenever is convenient for you and whatever is to be accomplished is your call too!  Don't knock it, it could work.  As for my own journey...

I wish I could say I was in love, but alas, it was only like.  The first half of the book had me hook, line, and sinker.  I was ready to do battle with the creepoids she encountered, backtalk her ever loving Italian family with their know-it-all advice giving faces (same background in my house, so I get it), cheer her on as she tackled each new "friendship" with its individual quirks and idiosyncrasies, and back her up if her potentially budding romance ever took flight (notice I said budding, not blossoming because HELLO...we'd all be old and gray before any actual action from either party in the affirmative was taken!). I wasn't as sold, however, on the business retreat for former business men and women, seeking new career paths due to displacement...pretty much the same as Jessie, only with more kumbaya moments and group activities.  It was just a portion of her path, but I, personally, could have done without it.

All in all, an interesting read that will at the very least give you a new appreciation for organization in your life, of your time, and in your friendships.  There's a place for everything and everything in its place...and friends belong in our hearts, so make time...even if it's just a moment...to let those you care for know they are special to you.

Author Mary Carlomagno is an Oprah favorite for her three previous books about organizing. She is also a nationally recognized spokesperson and owner of order (orderperiod.com) a company that helps busy people get organized and live more balanced lives. She has been featured on the Oprah Winfrey Show, NBC’s Today, and National Public Radio. She was born and raised in New Jersey and currently lives there with her husband and two children.   With her fiction debut Mary Carlomagno gives readers a funny and fresh book - great for summer beach reading or anytime of the year - with BEST FRIEND FOR HIRE.

Special thanks to Laura of Laura Rossi Public Relations for the ebook for review.  (THANKS!)  For  more information on this title, the author, the publisher, or those titles on the horizon, feel free to click through the links provided above.  This title is set to release TOMORROW, June 20th, 2017 via Post Hill Press, so be on the lookout for it on a bookstore shelf or virtual retailer of your choosing.