Today, we're closing out the week with a title that fits both the Contemporary Romance and Romantic Comedy subgenres.  So needless to say, there's a little something for the Romance reader in you, no matter which you gravitate more towards. 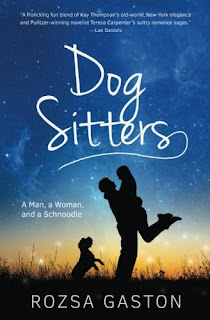 Dog Sitters:
A Man, a Woman, and a Schnoodle
by
Rozsa Gaston
Renaissance Editions

About the book...
When their friends take a cruise to Bermuda, strangers Hint Daniels and Jack Whitby are charged with looking after their friends’ dog. Then everything starts to go wrong…
In the leafy New York suburb of Bronxville, Hint is supposed to hand Percy off to Jack on day-five of the ten days their friends are away. But at the handoff, the dog ends up running away. Neither is willing to tell their friends the bad news that Percy is missing. Instead, they spend five frantic days desperately searching for the schnoodle, with wildly different ideas on how to go about it. Between Jack’s heavy-handed approach and Hint’s otherworldly style, their personalities clash. Before long they’re bickering furiously, even as romantic sparks fly.

Will Percy show up before his owners do? And what surprising discovery will Hint and Jack make while looking for him?

Hint and Jack.
Jack and Hint.
While one is a curious name for a leading lady (albeit, any character, for that matter), the other really needs to take one...a hint that is...no, I'm not throwing around innuendos, although he may have ulterior motives for wanting to save the day, not that her heart of hearts is that far behind.

What begins as a case of a mishandled leash, turns into a tale of two souls getting a leash on their own lives...and in the process, their hearts.  Little Percy and his love for the great outdoors is what gets the ball rolling.  He pulls his trick at the wrong moment and BOOM...he's reenacting his solo version of The Incredible Journey.  Meanwhile, his human would-be-caretakers, are scrambling to find him and the means they go to in order to snuff out this scruffy fella, would touch any dog owner's heart.  Speaking of hearts, theirs are not untouched by the situation, but there are other feelings emerging as they are forced to spend more time together than initially sought.  Good thing closeness can also make the heart grow fonder, otherwise I'm pretty sure we'd be dealing with someone severely not playing dead, as Jack can certainly be a pill.

In the end, though not as focused on dear sweet Percy as I was hoping, I found it to be a cute read, good for a weeknight pick me up or a few sunny hours in the park.  The snark and teasing play well together, while the inclusion of other characters, that play bigger roles than you might think, added an extra flavor of interest to the story in its entirety.  All in all, I think Percy would agree, with a two paws up rating....

Special thanks to Dorothy at Pump Up Your Book for the ecopy for review.  (THANKS!)  For more information on this title, the author, or to pick up your copy today, click on over to Amazon for a one-click shopping option.