Dead Ed in My Head by Barbara Catchpole

You know, I just realized as I was typing this post that it is officially JUNE.  Well, okay, so yesterday was technically the first, but still....it's June!  Where exactly did May go?  I mean, really, can you tell me?  It seems like we only started the month a few days ago and here we are welcoming another.  I guess time really does fly when you're having fun...or in the case of today's title, when you have nothing but time on your hands.

Today, we're traversing the globe with a Young Adult title via Raven Books.  It's a UK publisher, the teen division of Ransom Publishing to be exact, and their catalog is growing by leaps and bounds, hence my excitement in swinging the spotlight their way.  The title on deck today is a new release that just celebrated its BOOK BIRTHDAY last month and is ready for your reading consumption, so, if you're ready, let's raise the dead, or at least get them out of Tod's head!  Today's book of choice is... 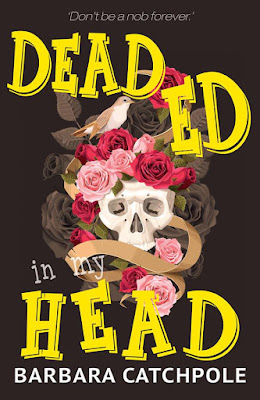 About the book...
An hilarious and unexpectedly moving story of two generations coming to terms with life. Teenager Tod has a few issues in his life, not least an inability to focus on anything that's ... well ... important. His dad has left home and his mum is nine months pregnant. Tod's only friend is Ed, a stroppy old guy who lives in a nursing home. When Ed dies, Tod finds Ed living on in his head - not as a memory, but as a real, noisy, stroppy person. They have conversations - and Ed even gets to enjoy his own funeral! But what is it like when you have to share your teenage head with a dead rocker? Ed thinks he can offer Todd useful advice - especially when it comes to girls. But Ed stuffed up his own life - is he going to make Tod's even worse?

It's a curious story starring those past their prime (or rather, expiration date), teens struggling to fit the molds poured for them, and generally life's bumpy road that we're all simply trying.  Here, some don't while others do so spectacularly...and that's all a part of its charm.

Tod is just your average lad trying to make it in the hallowed halls of learning by being inconspicuous, flying under the radar, and generally never standing out...ever.  Yeah, too bad for him because things are about to get BEYOND interesting when a particularly savvy and sassy senior citizen makes his mind home.  Yes, that's right.  What?  You thought the title meant something OTHER than what it clearly stated?  Nope.  Dead Ed is indeed in Tod's head...much to BOTH their chagrins, at least initially.  You see, while Tod views it as an inconvenience (hello!  Who wants a buddy when you're contemplating flirting, bathrooms breaks, and other "me time" activities?), Ed is beginning to see it for the second chance it may be.  Good thing he's such an upstanding fellow that would never dream of getting our boy Tod into trouble...and leaving him there...for any amount of time.  *blink blink*  Did I mention the guy chose a rock band t-shirt for his casket attire?  Yeah...needless to say things get a bit hairy, so much so in fact that we're not really sure Tod will survive, but we can't give up hope no matter have small it may seem.

All in all, it was a fun read...once us Yanks muddle through the language barriers.  If you're not accustomed to reading British lit (think Louise Rennison's, Georgia Nicholson series), it may throw you for a loop initially...hang in there, it's a right funny story.  The how is explained, the why a mystery throughout most the story (though you will have your suspicions) and you've got to love the ninja girlfriend. The final scene is anything but proper (think funeral with flair) but oh so fitting for the characters involved and the tale as a whole.  I will caution younger teen readers though, as being from across the pond there are certain boundaries that are crossed there that stateside may raise a few eyebrows.  Nothing totally scandalous, just a noticeable difference in a sort of censoring, or not.

So take a note from Ed, don't be a nob, check out this book for your next YA adventure!  I think you'll be right glad you did...

Barbara Catchpole was a teacher for over thirty years. She taught English, Special Needs and more or less anything else that was left over at the end of the timetabling. She has three sons of whom she is unbearably proud. She still spends a lot of time working in schools. Her main interest is in writing books for young people that are set in the real world and presenting characters that could be real teenagers. She tries to make them funny most of the time with just a little sadness thrown in because life's like that. She believes that adults can communicate really well with teenagers if the adult just makes a huge effort.

Special thanks to Rehana at Raven Books for the copy for review.  (THANKS!)  For more information on this title, the author, or the publisher, feel free to click through the links provided above.  This title is available now, so click on over to your favorite retailer to pick up a copy today.

Where did May go? Where the heck did January, February, March, and April go???

Dead Ed in my Head sounds like a fun read! While I wouldn't want anyone in my head, Ed sounds like he might be a fun choice!