Today, we're joining Online Book Events for a stop along their current tour featuring the work of author Anita Dickason.  Take one part serious criminal catching law enforcement officers, one part secret other-worldly﻿ abilities, and a whole lot of mystery...shaken not stirred...and you've got the Code Name-Trackers detective series.  Today, we're shining the light on the latest title to join the growing set and then we'll catch up with the author on the finer points of her writing.  Sound good?  Great!  Let's get started.  Today's spotlight shines on... 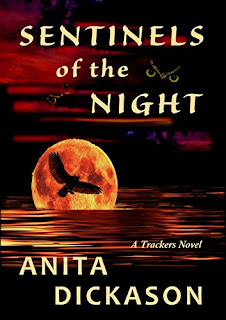 Sentinels of the Night
by
Anita Dickason

About the book...
FBI Tracker Cat Morgan has an unusual talent, one she has successfully concealed, even from her fellow agents. That is—until she finds a body with a strange symbol carved on the forehead during a stop in Clinton, Mississippi and crosses paths with the town’s rugged police chief, Kevin Hunter.

Despite his instant attraction to the sexy agent, Kevin is suspicious of her presence at the crime scene and isn’t buying her dubious explanations. He wants her out of the investigation and out of his town.

The discovery of another mutilated body with the same symbol sends Cat back to Clinton, and this time she isn’t leaving. To stop the killer, Cat must find a way to overcome Kevin’s distrust and will face an impossible impasse—truth or lies.

But will either one matter, when the killer fixates on her for his next sacrifice?

So...just where DOES the talent to write such a work come from?  Is it experience, blind luck, an innate ability to crawl behind the eyes of the disturbed without coming out scarred yourself?  Well, in this case, the author's work background comes into play...but I'll let her share that story.

Take it away Anita Dickason!

I was recently described in an interview as “SWAT team sniper to author.” While a bit dramatic, it does convey a sense of the experiences that influence my writings. I must say there is a lot “me” in my books. I write what I know, and that is crime and what it takes to be a cop.

Sentinels of the Night is the debut novel for a new paranormal FBI unit; code name—Trackers. The opening scene has Tracker Cat Morgan and her partner pursuing a serial killer in the middle of the night in a railroad yard. The incident happened, though I wasn’t chasing a killer. A man had stolen a car, bailed out, and was on the run. He decided the nearby railroad yard was a good place to ditch the two cops chasing him. I know what it felt like to dodge around the railroad cars and hop over tracks. Oh, and for inquiring minds, we caught him.

The plot came from another incident that occurred early in my career. I crossed paths with a serial killer. I was seated in the patrol detail room when two officers walked through with a man in handcuffs between them. As they approached the man’s face turned towards me. I’ve never forgotten the look in his eyes as he gazed at me. It was as if nothing was there, not a spark of emotion or feelings, just this dead look. The man was ultimately convicted on multiple charges of murder and was suspected in several others, though it was never proved. I used that experience to create the character for the serial killer. 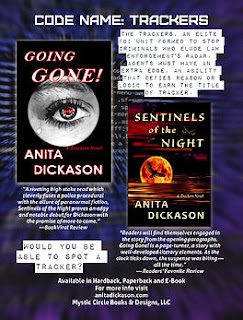 Going Gone! is the second of the Tracker novels. Experiences from my days as an undercover narcotics officer, patrol officer, and the SWAT team are embedded in the descriptions and events that unfold in the investigation of several high-profile kidnappings.

When I consider the plots and characters in my books, it is my law enforcement experience that flows through the words.

For more information on Sentinels of the Night and the second Tracker novel, Going Gone!, please see my website or the book trailers. 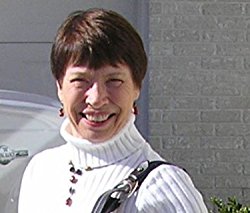 Her first book, JFK Assassination Eyewitness: Rush to Conspiracy—The Real Facts of Lee Bowers’ Death, was non-fiction. Bowers was a key witness to President Kennedy's assassination and died in a car crash in 1966. Conspiracy theorists have claimed Bowers was murdered because of what he saw the day Kennedy was shot. Anita conducted a cold case investigation of Bower’s death.

The project jump-started a new career as an author and publisher. She started a new business: Mystic Circle Books & Designs, LLC.

Her fictional works are suspense/thrillers. Characters with unexpected skills, that extra edge for overcoming danger and adversity, have always intrigued her. Adding an infatuation with ancient myths and legends of Native American Indians, and Scottish and Irish folklore creates the backdrop for her characters.

Her debut fictional novel, Sentinels of the Night sets up an elite team of FBI agents, Code Name—Trackers. Each have an extra edge, an ability that defies reason or logic. Going Gone! is the second in the Tracker novels.

As a publisher, her diverse background has proven to be an invaluable asset. Independent publishing is a computer-based field in a constant state of flux. Assisting other authors to publish their works utilizes the gamut of her experience. Graphics design has become one of her favorite endeavors

Special thanks to Susan at Online Book Events for the chance to bring this tour to you.  (THANKS!)  For more information on this title, the series, the author, this tour, or those on the horizon, feel free to click through the links provided above.

BEFORE YOU GO...
DON'T MISS YOUR CHANCE TO WIN IN THE TOUR WIDE GIVEAWAY!  $25 AMAZON GIFT CARD UP FOR GRABS!  ENDS SOON!

I so enjoyed your innovative presentation of my post. It is wonderful, and thank you so much for hosting my book.

My pleasure! Thanks for sharing and dropping by! =)