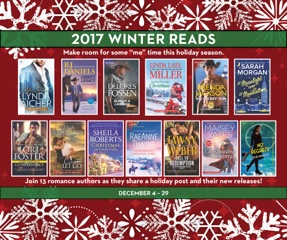 Today, we're joining TLC Book Tours and Harlequin to kick off a very special and timely treat!  It's time for the Winter Holiday Traditions (+ reads!) tour and stars several of their fabulous authors sharing their holiday memories and traditions from the heart, spotlights of their latest releases fresh off the presses and ready for YOUR reading pleasure, AND a chance to WIN A $50 AMAZON GIFT CARD.  Sound good?  I thought it might.  So, if you're ready, don your gay apparel, grab a cup of something piping hot, and settle down as we welcome today's featured author, Linda Lael Miller! 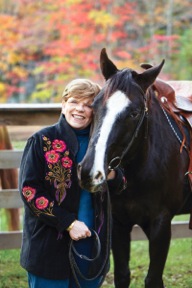 One of my earliest memories is of a Christmas in the early 1950's; I lived with my mom and dad on a hardscrabble ranch outside of Northport, Washington, though of course I don't remember it that way.  Still an only child, I was warm, well-fed and much loved.  I was around three years old, perhaps even a little younger, and we lived in a one room "cabin"--that's being generous, since I've been told the place was initially either a line shack or a chicken coop.  I know my dad, a veteran of World War 2, insulated the walls with huge cardboard boxes given to him by the good folks at the funeral home in nearby Collville.  As he told the story, he nailed these big pieces of heavy cardboard in place as winter approached, being extra careful to keep the printed part to the wall.

That night, lying in bed, he looked up and saw the words "Sunshine Coffin Company" directly overhead.

We had a wood stove, and I remember my mother telling me all about Santa Claus, explaining that he would come down the chimney around midnight, since it was Christmas Eve.  I recall eyeing that narrow stove pipe and feeling just the slightest bit skeptical; I figured this Santa dude must be a little slow, if he'd try to squeeze his bulking self down that narrow black pipe, and risk burning his feet on the embers in the bargain.  Why didn't he just come in through the door, like everybody else?

Mom and I hung up one of Dad's old work socks--the gray woolen kind with the red stripes around the top.  This strange visitor would fill it with goodies, Mom said, and put a few toys under our no-doubt spindly Christmas tree--I don't remember the tree, and since we didn't have electricity at that point, it's a given that there were no bright lights.

I didn't care, one way or the other.  This whole Christmas thing was brand new to me, but if it was half as good as Mom claimed, I was up for it. The thing was, I had to be asleep when Santa arrived, or he might not stop.  I tried to imagine a sleigh and flying reindeer, but it was beyond the scope of my experience, for sure. 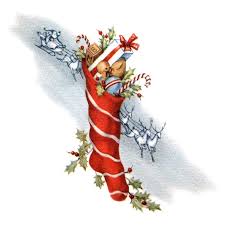 There must have been presents and a bulge in that old wool stocking the next morning; I don't remember.  The bottom had fallen out of the beef market, so there wasn't much money, but I'm sure there must have been a nice round orange in the toe of the sock, along with a peppermint stick, a handful of mixed nuts, and small toys carefully chosen at Fonk's Five and Dime in Collville.  How do I know this?  Because every Christmas Eve, until I was too old to hang a stocking, there was always a candy cane, an orange, and some almonds, hazelnuts, Brazil nuts, etc, along with magical things gathered throughout the previous year and tucked away for the purpose.  There still wasn't a lot of money, and I believe most of these gifts were pretty modest, but they never, ever disappointed--Mom had a real knack for finding things to delight a child's heart.  I still recall the little silver cross I found in my stocking one year--how it glowed in the dim light reflecting off the snow outside my bedroom window.  She probably paid under a dollar for that necklace, and here I am, more than fifty years later, with a clear image of it shining in my mind.  Of all the many gifts I've received over the years, I remember that cross vividly.

By then, obviously, we'd moved into town, and I had a brother and a baby sister.  I guess we must have been pretty poor, all things considered, but I don't remember feeling poor, even once.  We always had a turkey dinner, and a lovely, fragrant tree, cut down in the woods and brought to stand outside the front door until the branches were dry enough.  How anxious my brother and I were for that tree to dry, so we could drape it with bubble lights, bright baubles and lots and lots of tinsel.  There were always presents on Christmas morning, and to us, it looked like real bounty.  The rule was, no presents until after breakfast--always a hearty one of either bacon or sausage, eggs, fried potatoes and all the rest.  We had to be content with the contents of our stockings until after the meal, and we were half out of our skins with excitement by the time Mom and Dad finally turned us loose.  I don't think my brother and I believed in Santa by then, but we pretended, for the sake of our little sister, and let's face it, believing kept the magic alive.  Since the jolly old man always left at least one unwrapped gift for each of us, we didn't bounce off the walls waiting to rip into that year's loot.

There were always pageants at church and school, leading up to the big day, and the Friday after Thanksgiving, the members of the Lion's Club erected a beautiful tree in the center of town.  People visited each other's houses back then, to admire the Christmas decorations and swap small gifts, usually things like embroidered dishtowels or Mason jars filled with last summer's vegetables and berries.  We gave and received canned pears, glowing like jewels in a syrup dyed with either red or green food coloring, and flavored with cinnamon or mint.

Now, all these years later, I still love Christmas--the festive snap in the air, the special movies, such as "It's a Wonderful Life," "The Bishop's Wife', and "A Charlie Brown Christmas."  Since this was long before the days of streaming video, a person had to comb through the newspaper listings or "TV Guide" if they didn't want to miss them.  Often, there were special episodes on our favorite TV series', too, and believe me, they were an event all by themselves.

Just about everyone had a Nativity scene, and it was a big deal to set out the Holy Family, the Wise Men and the shepherds and, especially, the little sheep, the donkey and the cow.  Mom wasn't shy about reminding us of the real meaning of Christmas, stockings and pumpkin pie and roast turkey aside--and she staunchly maintained that at midnight on Christmas Eve, animals in barns all over the world would talk to each other, in human voices.

Possibly the best thing about those old-fashioned Christmases was the sense of magic and mystery.  Back then, Halloween, Thanksgiving and Christmas were distinct from each other, and each was celebrated as a special occasion in its own right.  Each had its own traditions.

These days, they sort of all run together--the stores put out ornaments, greeting cards and all kinds of other merchandise in June or July, for heaven's sake.  Where's the magic in that?  Where's the mystery?

It's still there, I'm glad to say, hiding in the hearts of kindly souls everywhere--it's in the warm smiles, the hugs, the generosity.  We just have to look a little harder to find it, that's all.

In closing, I wish you and yours the happiest of holiday seasons, whatever your faith, and whatever you celebrate.  May 2018 be a year of health and joy and abundant blessings of all sorts, for you and all those you love. 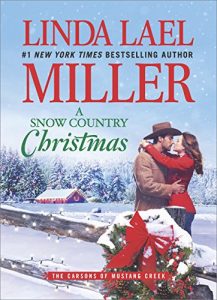 About the book...
It’s a Christmas affair to remember as a Hollywood mogul discovers his inner cowboy—and the woman of his dreams—amid the rugged beauty of Wyoming.

Raine McCall would take snow-covered mountains over a star-studded premiere any day. But when hotshot movie executive Mick Branson arranges dinner on Christmas Eve to discuss a work opportunity, she’s intrigued—by the offer and the man. She’s a no-makeup, no-frills single mom, who’s happy with her quiet life. Sharing chili cheeseburgers and sizzling kisses with Mick is sure heating up her holiday, but country girl and power player don’t mix…

It’s not just work that’s brought Mick back to Mustang Creek. Since he first visited to oversee a documentary, free-spirited graphic designer Raine has been in his head. Her approach to life is as unconventional as her quirky holiday ornaments. Their attraction is undeniable—and so are their differences. Putting down roots in the Wild West wasn’t in the script. But there are some Christmas gifts you can’t walk away from, even when they turn your whole world upside down…

Special thanks to TLC Book Tours, Harlequin Books, and author Linda Lael Miller for the chance to bring this tour to you.  (THANKS!)  For more information on this title, the author, the publisher, THIS TOUR, or those on the horizon, feel free to click through the links provided above.  This title was released September 2017 via HQN Books, so grab a copy this holiday season at your local bookstore or online retailer for a merry and bright holiday.

Thanks for featuring Linda for the tour!