Who ARE You?: Prince in Disguise by Stephanie Kate Strohm

Today, we're joining a Disney Publishing Worldwide BLOG TOUR already in progress.  It stars the latest release from a new-to-me author in the Young Adult Contemporary Romance arena and trust me when I say, it has all the feels plus a few twists and let's not forget the adorbs accents!  Don't believe me?  Well then, I suppose I should get this trans-Atlantic party on the road.  Ladies and gents, lords and ladies, please join me for today's book of choice... 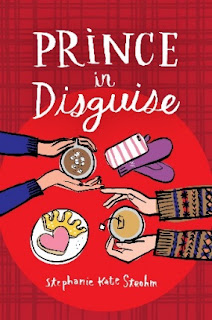 About the book...
Someday I want to live in a place where I never hear “You’re Dusty’s sister?” ever again. Life is real enough for Dylan-especially as the ordinary younger sister of Dusty, former Miss Mississippi and the most perfect, popular girl in Tupelo. But when Dusty wins the hand of the handsome Scottish laird-to-be Ronan on the TRC television network’s crown jewel, Prince in Disguise, Dylan has to face a different kind of reality: reality TV. As the camera crew whisks them off to Scotland to film the lead-up to the wedding, camera-shy Dylan is front and center as Dusty’s maid of honor. The producers are full of surprises–including old family secrets, long-lost relatives, and a hostile future mother-in-law who thinks Dusty and Dylan’s family isn’t good enough for her only son. At least there’s Jamie, an adorably bookish groomsman who might just be the perfect antidote to all Dylan’s stress . . . if she just can keep TRC from turning her into the next reality show sensation.

From the initial meet cute (or meet COLD, more accurately stated, seeing as our girl Dylan had blue lips!) straight through to the BIG EVENT, I was hooked.  I was smiling at the give and take chemistry between Jamie and Dylan (though thoroughly prepared to murder him if he was simply messing with our girl!), laughing at the antics of Dusty and her mama (pageant queen and morning show host...yeah, there's a lot of fake-it-til-you-make-it there) , smiling at the support Heaven provided as well Kit's comedic relief provided without a moment's hesitation, and just generally enjoying myself.  It's been a while since I enjoyed a book in this genre so completely.

Often times Contemporary Romance works even in the Young Adult genre can take things...shall we say a bit too far?  I don't mean indecently, but perhaps just a few steps into the realm of New Adult or just plain old Adult.  This one retains the sweetness of the moment, enjoys the romance for what it is, and allows readers to step inside the innocence of first love's potential bloom without encountering the thorns...sort of.  (Hey, it IS all taking place within a reality show, which does beg the question...exactly how much of this is real?)  The moments shared (and I do mean SHARED...as in cameras everywhere!  Ack!) in the barn loft (mind out of the gutter) with that view and the snow and the closeness, the escapes into the library (a LIBRARY...in a CASTLE....anyone else thinking Beauty & the Beast?), the bets placed in good humor with silly but meaningful stakes, and the truths shared among the lies (two repetitive words...REALITY SHOW), all lend a certain tenderness to the story while the supposed main event unfolds.

In conclusion, this is one story with more secrets than you can shake a stick at and if you decide to actually pick up said stick and shake it, you best have your face on and your hair did because reality TV waits for no man...or woman.  Grab a front row seat for this reality show-esque read that'll have you wondering just how much of your favorite shows are scripted versus life simply playing out on the small screen...for better or worse.

Stephanie Kate Strohm is the author of It's Not Me, It's You; The Taming of the Drew; Pilgrims Don't Wear Pink; Confederates Don't Wear Couture and the upcoming The Date to Save and Prince in Disguise (Fall 2017). She grew up on the Connecticut coast, where a steady diet of Little House on the Prairie turned her into a history nerd at an early age. After graduating with a joint major in theater and history from Middlebury College, she acted her way around the country, performing in more than 25 states.

Although she was born in New York, she currently lives in Chicago, and doesn't discriminate against any type of pizza. When she's not writing, she loves baking, walking her dog Lorelei, taking dance cardio classes too seriously, and playing board games with her husband.

Special thanks to Amy at Disney Publishing Worldwide for the ARC for review as well as the chance to bring this tour to you.  (THANKS!)  For more information on this title, the author, or the publisher, feel free to click through the links provided above.  This title just hit bookstore and virtual shelves earlier this week (12/19/17) via Disney Hyperion, so be on the lookout for it at your favorite retailers!

Until next time, remember...if it looks good, READ IT!
Posted by Gina at 3:16 AM