Today, we're teaming up with Literally Public Relations Limited to bring you a stop along their current tour featuring a NEW RELEASE title in the Middle Grade Fiction genre﻿.  It's unique for many reasons, one of which is that is falls under the sub genre of Historical Fiction with a heavy hand, and all signs point to it being the first in a planned series (especially with THAT ending!), but I digress.  Let's do things properly and get the introductions under way.  Today's blog tour guest and book of choice is... 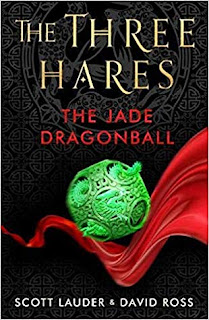 About the book...
Sara Livingstone's school trip to the Beijing Palace Museum takes a terrifying turn when an encounter with the ancient Qingming Scroll thrusts her a thousand years into China's past. With secrets in the shadows and danger around every corner, Sara relies on her wits and her Granny Tang's stories to survive. As dark forces gather, she must take her place in a cosmic battle and find the courage to face an unworldly ancient magic.


This was quite the adventure, but it was also very much a first installment.
On this journey, we encounter China in both past and present times, and the story unfolds within BOTH timelines (and somewhere in between, but that's getting ahead of ourselves), eventually weaving together...but only just.  I admit, until the stories began to comingle, I was much more invested in the PAST versus present.  I mean, how DID Shan Mu become Shan Wu.  What was the significance?  Why did the other man constantly want to guide him away from his true feelings and onto a more enlightened path?  Okay, well maybe that last one I sort of guessed, but still....SO MANY QUESTIONS!  In the present, Sara's mysterious predicament of being dragged from her modern day world into some sort of gray in between whenever a certain person came into conversation was...strange.  I mean, obviously what was happening to her wasn't in her time...exactly...so I could only imagine what those around her thought was happening as she spaced out or fell out without any explanation.  It sounds bad, but it was just difficult for me to care for her until things got "real", so to speak....and then, whew! Did they ever get real!

Story wise...I loved how the authors made sure to separate the past and present sections to allow the reader to fully immerse themselves in the story without battling the "when am I" question along the way.  I adored the rich history and lore that was shared, as well as how it was brought to life between the pages.  They made you feel for every character, delving into the WHY behind their actions, even allowing you to feel sorrow for the predicaments they land themselves in, be they a GOOD person or one of the shall we say "misguided".  I hate to say it, but things really started to get interesting around the time we had to call it quits...but, it does make the anticipation of the next one that much sweeter!

Scott Lauder has always been fascinated by other cultures, which inspired his choice to live in myriad countries including Greece, Saudi Arabia, the UAE and Japan, throughout his life. Born in Ayrshire, Scotland Scott now lives with his wife in Sharjah. History is another of Scott’s passions; both of his graded readers for Oxford University Press were set in the past, one in Ancient Egypt, the other in Ancient Rome. He cites researching the periods for those books and the Three Hares series as “great fun,” a passion that emanates throughout the novel.

David Ross has taught English since 1987, when he began working in Japan. There, he met his co-author, Scott Lauder, when they both taught at the same English school. While in Japan, David performed with a rock band for a couple of years and produced an album (Los Turbines). His decade of teaching in Japan provided with the opportunity to travel in Asia, Africa, and Europe. After returning to his home country of the United States of America, David taught at Loyola University in New Orleans, before moving to New York in 2004, where he taught elementary school – and where he still lives with his wife and two sons. In 2010, David received his doctorate in Educational Studies from McGill University in Montreal. He has spent four summers of the last decade, two in China and two in Indonesia, teaching at universities.

Special thanks to Francesca at Literally Public Relations Limited for the chance to bring this tour to you as well as the copy for review.  (THANKS!) For more information on this title, the authors, the publisher, or the publicists, feel free to click through the links provided above.  This title celebrated its BOOK BIRTHDAY September 5th, 2019 via Neem Tree Press, so click on over to your favorite online retailer to snag your copy today.