Today, we're spreading a bit of PRE BOOK BIRTHDAY BUZZ about a Young Adult title COMING SOON via Holiday House Publishing!  It fits into the Contemporary category rather nicely, but contains a certain twist.  Yes, my friends, this isn't the usual girl-meets-boy/girl-falls-in-love-but-can't-see-a-way-to-actually-be-with-that-person sort of story.  Instead, we've got a tale that while Fiction is pulled from fact and centers around the life of a young girl that while seemingly everything it should be to her...wasn't even a fraction of what it could have been.  Ready or not, here comes today's title in the spotlight... 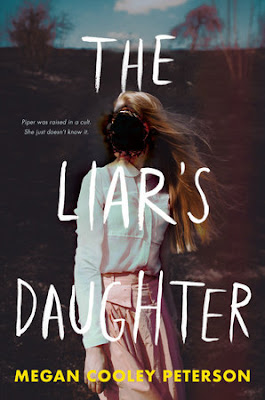 About the book...
Piper was raised in a cult.She just doesn't know it. Seventeen-year-old Piper knows that Father is a Prophet. Infallible. The chosen one.

Until the day he doesn't. Until the day the government raids the compound and separates Piper from her siblings, from Mother, from the Aunts, from all of Father's followers—even from Caspian, the boy she loves.

Now Piper is living Outside. Among Them.

But Piper knows better. And Piper is going to escape.

Honestly?
This was a FASCINATING read.

Piper has a loving family life.  She's provided for, taken care of, and given responsibilities, just like any other teenager.  Mother and Father only want what's best for her and her siblings.  The thing is...her life may SOUND like every other teen's existence before her, but it's anything but.  You see, she had a life BEFORE and a life AFTER, and while she may not clearly remember anything of the former or what even caused the invisible chasm that exists, it's about to come crashing through the latter laced with first love, parental doubts, and gunfire.

One thing I found interesting here, aside from the story itself, is how it makes you really THINK.  I mean, who's to say what NORMAL looks like.  To this group of "believers", this WAS their everyday...while to outsiders, such as myself, it appears oh-so-many-shades-of-wrong that I can't even fathom being put in her position.  You could walk the line of "if it doesn't hurt anyone, how wrong can it be", but then again...who decides if a hurt was felt or if something qualifies as being called a hurt?  The scene with Cas and Father, surrounded by their circle of "family" baring witness to his "cleansing", could at once be called abuse while to them it was a simple expulsion of inner guilt and darkness.  WHO chooses?  WHO makes right RIGHT and wrong WRONG?


Outside of the serious thinking matter provided here, the story itself is as I formerly stated...FASCINATING. The author really puts you in Piper's shoes, giving you a look at life through the eyes of a "believer", while also allowing us to experience the utter shattering that comes from everything we think we know to be a truth becoming a lie.  As absurd as it was to see her way of life as the right way, you could see the argument for the other side, and yet you could also see what it felt like to be the "Them" introduced to her little world, trying to understand what had happened, trying to help them come back to a version of themselves they don't even remember existing.  Her relationship with Cas was something normally written in the stars, and her heartfelt care for the "littles" was truly touching.  It felt right in the end when her new ID was revealed because she wasn't truly the former her or the current her, but a new her trying to reconcile all the pieces she'd been left with. 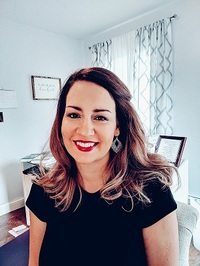 Megan Cooley Peterson is an author, editor, and coffee drinker. As a teenager, Megan was part of a cult-like doomsday church that didn’t like to be questioned. She questioned anyway. She has written more than 80 nonfiction books for children on a wide variety of topics, including dinosaurs, sharks, urban legends, and haunted objects. The Liar’s Daughter is her first YA novel. She lives in Minnesota with her husband and daughter.

She is represented by Margaret Sutherland Brown of the Emma Sweeney Agency.

Special thanks to the Holiday House Publishing team for the ARC for review.  (THANKS!)  For more information on this title, the author, or the publisher, feel free to click through the links provided above.  This title is set to release September 10th, 2019 (as of this post), so mark your calendar or pre order your copy today!

Wow! That's one striking cover. Having found myself enjoying more and more YA books recently this one certainly appeals. The very fact that it isn't your usual girl meets boy, falls in love but can't see a way to be with him intrigues me.