TLC Book Tours presents... DON'T YOU FORGET ABOUT ME by Mhairi McFarlane

Today, we're playing host to a stop along the TLC Book Tours promotion featuring a NEW Contemporary Romance title that just celebrated its BOOK BIRTHDAY this week via William Morrow Paperbacks.  It's from an author who's penned several previous works (those of which I plan to investigate further) and reached the celebrated "internationally bestselling" status, but is new to me, so when I read about this one, I admit...I was intrigued!  So, in an effort to keep your Friday the 13th from being anything other than spectacular, let's get this party started!  Ladies and gents, make room on your TO READ list as we welcome today's blog tour guest and book of choice... 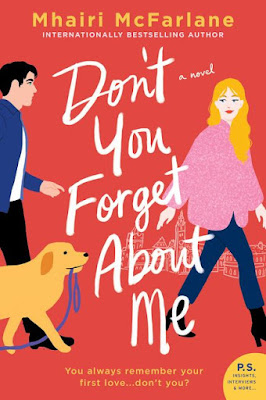 “Don’t You Forget About Me is one of those books I couldn’t put down. Crackling with energy and wit, I lost count of how many times I laughed out loud. Mhairi McFarlane’s voice is as clear as a bell—she makes you laugh, but she also makes you feel. I adore her!” — Sally Thorne

You always remember your first love… don’t you?

If there’s anything worse than being fired from the lousiest restaurant in town, it’s coming home early to find your boyfriend in bed with someone else. Reeling from the humiliation of a double dumping in one day, Georgina takes the next job that comes her way—bartender in a newly opened pub. There’s only one problem: it’s run by the guy she fell in love with years ago. And—make that two problems—he doesn’t remember her. At all. But she has fabulous friends and her signature hot pink fur coat… what more could a girl really need?

Lucas McCarthy has not only grown into a broodingly handsome man, but he’s also turned into an actual grown-up, with a thriving business and a dog along the way. Crossing paths with him again throws Georgina’s rocky present into sharp relief—and brings a secret from her past bubbling to the surface. Only she knows what happened twelve years ago, and why she’s allowed the memories to chase her ever since. But maybe it’s not too late for the truth… or a second chance with the one that got away?

Once upon a time, Esme and Lucas were in love.  It was unexpected, it was all consuming, it was a high school sweetheart romance that seemed simply meant to be...until it wasn't.  One night, it all came tumbling down in such "spectacular" fashion, they practically never heard from each other again.  Thing is, fate is a fickle mistress, but she wants what she wants, as does the heart...so when their paths cross OH-so-many years later, the possibilities should be endless...right?  Umm, yeah about that...

Honestly, I was hooked from the start as we tagged along with Esme through shades of the past, only to land in a present that was nothing short of newsworthy...only in the worst ways possible (think AWFUL job ended on their terms PLUS a scuzbag boyfriend caught in the act...eww).  Let's face it, she's had a time of it, and while she openly accepts the blame big girl style for her part in things, the majority truly was anything but her fault...not that her FAMILY could have recognized that fact...gheesh!  My heart ached for her with the lack of support she received for practically anything, but swelled in delight as she tackled life one crazy obstacle at a time in her own way, with her own fashion sense, and with heart.  It was a terrible blow when the beau from yesteryear didn't seem to acknowledge their past in any way (WTH?!), when the more recent former beau wouldn't TAKE A HINT (and a hike), and life seemed intent on giving her more lemons than anyone would wish to make lemonade with, but SHE NEVER GAVE UP...which made her revelations during the Share Your Shame contest THAT much more freeing.

So, if you're looking for the possibility of a romance (which I gotta say, if something didn't happen for her by book's end, I was SO gonna have words with the author!), a female lead with more strength than she knows, a male lead that doesn't know the power he truly holds (oh Lucas...if you weren't so much a complete package, I'd be forced to smack you), and a whole lot of ups, downs, and in-betweens with shock, humor, heart, and a hug worthy pupper...this one is TOTALLY for you!

Sunday Times bestselling author Mhairi McFarlane was born in Scotland and her unnecessarily confusing name is pronounced Vah-Ree. After some efforts at journalism, she started writing novels and her first book, You Had Me At Hello, was an instant success. She’s now written five books and she lives in Nottingham with a man and a cat.

Special thanks to Trish at TLC Book Tours and the team at William Morrow for the chance to bring this tour to you as well as the ARC for review.  (THANKS!)  For more information on this title, the author, the publisher, THIS TOUR, or those on the horizon, feel free to click through the links provided above.  This title was released September 10th, 2019 via William Morrow, an imprint of Harper Collins Publishers, so be on the lookout for it on a bookstore shelf or virtual retailer of your choosing.  For more bookish fun, be sure to check out the rest of the tour making its way through the blogosphere...

I do love a slow burning romance!

Oooh... I'm ALMOST done with this one and absolutely loving it! Thank you for being on this tour. Sara @ TLC Book Tours

@Sara Strand: Ooh...hang on to your heart because the last part will test it!