PRETTY FUNNY FOR A GIRL by Rebecca Elliott - REVIEW!

Hi there!
Welcome back to Satisfaction for Insatiable Readers.
Today, we're shining the book spotlight on a Young Adult title that celebrated its BOOK BIRTHDAY last month via Peachtree Publishing Company. It's a story that while certainly bringing the laughs, it also really makes you stop and think. Interested? You should be because there's a plethora of other messages to take with you once the audience applause dies down, so, if you're ready, let's get this title center stage as we present today's book of choice... 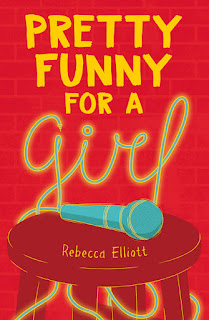 Pretty Funny for a Girl
by
Rebecca Elliott
9781682631478
Peachtree Publishing Company
About the book...
A candid and laugh-out-loud journey of family, friends, and fierce mistakes.
Haylah Swinton is an ace best friend, a loving daughter, and an incredibly patient sister to a four-year-old nutcase of a brother. Best of all, she's pretty confident she's mastered making light of every situation--from her mom's new boyfriend to unsolicited remarks on her plus-sized figure. Haylah's learning to embrace all of her curvy parts and, besides, she has a secret: one day, she'll be a stand-up comedian star.
So when impossibly cool and thirstalicious Leo reveals he's also into comedy, Haylah jumps at the chance to ghost-write his sets. But is Leo as interested in returning the favor? Even though her friends warn her of Leo's intentions, Haylah's not ready to listen--and she might just be digging herself deeper toward heartbreak. If Haylah's ever going to step into the spotlight, first she'll need to find the confidence to put herself out there and strut like the boss she really is.
Rebecca Elliott's hilarious and authentic narrative voice is sure to capture readers' hearts as her plus-sized, teenage heroine navigates learning to love the body she's in while dealing with friends, family, and boys.
🤣     😅     😜     😁     😜     😅      🤣 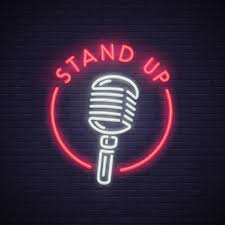 Why do we feel in order to not BE the punchline, we have to make it first? Is it our culture, society, home life, circle of support? Why can't we just BE?
Pretty heavy for what appears to be a comedic reading selection, right?  Well I was surprised too!  And no, that wasn't a dig at our leading lady.  I liked the fact that Haylah was unexpected, went against the grain, and followed her own drummer.  I appreciated the fact that she had a dream and was willing to do what it took to reach it.  I was grateful for the fact that she wasn't perfect and experienced the pitfalls that EVERY TEEN DOES at some point or another...you know the ones.   The pretty face that turns your head, the little comments that finally get to you, the self-doubt that creeps into the bravado, the...well, you get the picture.  It wasn't that I wanted hardship for our gal, but I wanted that dose of reality, harsh as it could be, but also that moment of WAKE UP HAYLAH and see what's really in front of you, what you have to offer the world, and don't simply laugh it away, but accept that you are a masterpiece in every way.
All in all, this story was HAY-LAH good! Belly laughs run amuck, but there's a lot of every day issues dealt with as well in such a grand way. It's a STRONG book about being true to yourself, following your dreams, and never letting anyone stand in your way...including yourself!  A great read for those in their teens traveling the same roads as our heroine, as well as for those that simply need a reminder of how fabulous they really are.
🤣     😅     😜     😁     😜     😅      🤣
About the author... 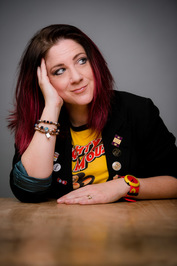 Rebecca Elliott is the author and illustrator of the best-selling Owl Diaries series (Scholastic US) & over 20 picture books including Just Because, Sometimes, Naked Trevor and Zoo Girl, for which she was nominated for the 2012 Kate Greenaway Medal.
Her new series The Unicorn Diaries (Scholastic US) & her first YA novel 'Pretty Funny ' (Penguin Random House) are out now.
SITE  |  TWITTER
🤣     😅     😜     😁     😜     😅      🤣

Special thanks to Casey at Media Masters Publicity for bringing this title to my attention, and to Peachtree Publishing Company for the ARC for review.  (THANKS!)  For more information on this title, the author, or the publisher, feel free to click through the links provided above.
Until next time, remember... if it looks good, READ IT!
Posted by Gina at 9:11 PM