Today, we're joining Rachel's Random Resources for a stop along their current promotion featuring the latest from author Laura Briggs.  So, if you're ready to add to your reading list, READ ON as we sample today's selection with a special excerpt! 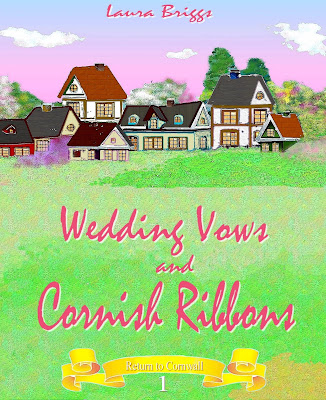 Wedding Vows and Cornish Ribbons
by
Laura Briggs
About the book...

Event planner Julianne Rose is on the verge of making her dreams of ‘rescuing’ weddings in need of help a reality. She and business partner Kitty have finally finished transforming the dilapidated barn into a chic event space, and they even have a new client eager to use it—a quirky, charming space organization guru named Deirdre who seems capable of organizing everything but her own special day. As if that wasn’t enough, a once-in-a-lifetime opportunity soon presents itself through the who’s who of their sleepy little Cornish village: the chance to step into the event planning void for a posh bride in desperate need of an emergency salvage for her wedding plans. A wedding that could establish Julianne and Kitty as two of Cornwall’s best event planners if all goes well.

But an event that big doesn’t come without a catch. To persuade the posh clients to commit to them, Julianne and Kitty must first impress them with the ceremony for their current bride-to-be—a task that seemed easy, but proves complicated when stories emerge involving a history of broken engagements, cold feet, and commitment phobia on the part of Deirdre, who soon begins to exhibit possible symptoms of nervousness regarding her big day. Faced with a real case of runaway bride—and with their future reputation at stake— they must attempt to the impossible task of holding together a wedding fraying at its seams, and Julianne finds herself seemingly facing a choice between what’s best for Save the Date’s survival and what’s best for her client’s happiness, regardless of the cost.

Are Julianne’s worst fears about to be realized, with Deirdre gearing up for yet another run from the church altar? Can she persuade the posh but sympathetic bride Alexi to take a risk on Save the Date regardless of it? And will Julianne and the handsome-but-equally-busy Matt find time to smolder anything in their marriage besides leftover chicken pie? Readers will learn these answers and more in the funny and heartfelt sequel to the first full-length titular novel Return to Cornwall .

Thanks so much to Gina for this chance to give her readers a glimpse of my newest romance read. It’s called Wedding Vows and Cornish Ribbons and is the first book in my new series about event planner Julianne’s adventures living and working in an idyllic Cornish village. In the scene below, Julianne worries about the rumors surrounding her newest client’s past history as a so-called ‘runaway bride’.

Our bell jingled. "You've come in early," said Nina, one of our first clients, who was chair of the local village summer fete committee at the time. "I thought I saw your bicycle parked outside. I wanted to tell you that the church won't be needing flowers this week, because Josie is bringing down a large arrangement of lilies from a posh wedding at the Castle hotel — she's working as a maid there on Saturday, and she said they'll go to waste if no one takes them home."

"I'll let Kitty know as soon as she comes in," I said. "I think she'll be relieved, since she has to coordinate the wine deliveries to the manor all this week. I'll be launching the new client's wedding plans on my own the first couple of days."

"They're not really locals," I said. "Do you know the contractor near Par — Nic? He has a crew that does extensions, roofs, et cetera," I said. "His fiancee is the new declutterer and interior organizer who's just moved there, Deirdre Owen. If you need your sheds emptied and your living room cleared of junk and harmonized to your personality, she's the person you ring."

I could see the change come over Nina's face. "Really," she said, in a voice that held back whatever she really wanted to say. I had a sudden feeling I knew what it was, like a cold finger poking me inside.

Before I could say anything, she held up her hand to stop me. "Now, I never hold with gossip and don't like spreading it," she said. "But for what it's worth, I would caution you to be a bit careful. I know a young man from the Newquay airport who used to be in love with a woman called Deirdre Owen. If it's the same one, she broke off their engagement without warning a year ago, with only a week to go before the ceremony."

"And it wasn't the first time, I take it," I suggested.

Nina looked surprised. "I wouldn't know if that's true," she answered. "I only know her name because he was such a nice young man — good friends with my boy Johnny, before he moved to Reading. I think he said she was some sort of decorator — but it may not be the same person for all I know."

She touched my arm. "Anyway, I must go. I only stopped to tell you about the flowers." She closed the door behind her, as the little bell overhead jingled.

A decorator. That was too much of a coincidence. At this point, I was beginning to feel certainty that one of these stories was true, even if Deirdre hadn't run away from the altar with half the county, as some rumors probably claimed. 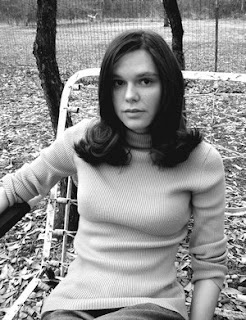 Laura Briggs is the author of several feel-good romance reads, including the Top 100 Amazon UK seller 'A Wedding in Cornwall'. She has a fondness for vintage style dresses (especially ones with polka dots), and reads everything from Jane Austen to modern day mysteries. When she's not writing, she enjoys spending time with family and friends, going to church, caring for her pets, gardening, and seeing the occasional movie or play.

Special thanks to Rachel at Rachel's Random Resources for the chance to bring this tour to you. (THANKS!) For more information on this title, the author, this promotion, or those on the horizon, feel free to click through the links provided above. Be sure to check out the rest of the tour for more bookish fun!
Until next time, remember....if it looks good, READ IT!
Posted by Gina at 9:42 AM