Today, we've joined Rachel's Random Resources to help shine a spotlight on a title that may be just the right fit for you or someone on your holiday shopping list. So, get ready because we're taking a look between the pages of today's title in the spotlight... 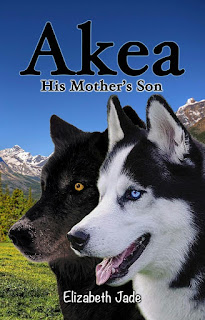 Akea:  His Mother's Son
by
Elizabeth Jade
About the book...
Akea is no ordinary husky and taking her place as Wolf Queen was just the first step in the journey set out for her by the Great Wolf. Akea's world turns upside down when humans raid their home, scattering the pack and capturing her hybrid son. Salvador struggles to adjust to a life in captivity quickly realising not everyone approves of his mother's rise to Wolf Queen. When the Great Wolf sends him warning dreams, Salvador discovers his true purpose for being there.
“Ms Jade perfectly captures the atmosphere of life as part of the wolfpack and its many challenges. Her stories remind me of Jack London’s Call of the Wild, and with ‘His Mother’s Son’ she proves she not only has a knack for creating realistic and powerful characters, but a talent for describing the wild settings they inhabit with a natural confidence that is quite charming.” Colin Garrow (author)
AMAZON  UK  | US
~~~~~~~~~~~~~~~~~~~~~~~~~~
~~~   EXCERPT   ~~~
Extract from Chapter 5 – A few months after Akea’s son has been captured and taken to a wildlife park
Early that afternoon, as Salvador lay in the entrance to his cave, he noticed some movement inside the previously empty enclosure beside his own. There had been some human activity a short time before, and although he was sure they had all gone, there was most certainly something moving in there now. It was all very strange.
He watched for a moment, unsure what to make of it, but he soon allowed curiosity to overcome caution and made his way over to the mesh, pressing his nose up against it and taking in a deep breath through his nostrils.
Suddenly, something threw itself against the mesh with such a ferocious snarling and snapping that Salvador leapt back in alarm. The vicious creature turned out to be no more than a young female wolf who was just as frightened and confused as he had been when he first arrived. He studied her for a moment, taking in her sable tan coat and walnut eyes before cautiously approaching the fence again, desperate to befriend the only other wolf he had seen in months.
“It’s alright,” he said gently, making certain his posture matched his tone. “You are quite safe. My name is Salvador, who are you?” The other wolf continued to snarl at him, hackles raised, and lips curled. “Nice name,” he replied, in a voice rich with sarcasm, “And you’re very pretty too.” Puzzled by his strange response, the female stopped snarling and stared at him. Immediately her face softened, and although her ears remained pricked, she was more uncertain now than aggressive.
“Who are you and from where do you come?” she asked in a superior manner. Salvador thought for a moment - he had already given her his name and yet she was asking who he was. Then he understood: in the absence of the traditional exchange of information through sniffing, this young female had adopted a more formal approach.
“I am Salvador, son of Akea, the husky who rules as Volk Queen and son of Kazakh, the alpha male who succeeded his father, Leopardo. I was taken from my mountain homeland during a night raid by the humans. Tell me please: who are you and from where do you come?”
She stared at him as he stood there expectantly. Then with one word, she turned her back on him and walked away with her head and tail held high. She left poor Salvador sad and hurt, with the word ‘mongrel’ ringing in his ears. Her harsh words made him aware, for the first time, that not everyone approved of his mother’s role as Queen, even though the former Wolf Queen herself had given her blessing.
Salvador sighed deeply. He missed his mother more than he cared to admit, but as he turned to walk away, he stopped. He may be a ‘mongrel’ as she put it, but he was not about to let her think he was ashamed of his background. His mother was a descendant of the Great Wolf himself, and if that was good enough for the old Queen then it was good enough for him.
“Now look here!” he yelled angrily, “You can be disagreeable, cantankerous and rude if you like, but there’s not that much difference between us, Zara. I may only be part volk, but you would not have known it had I not told you. I am not ashamed of who I am, but I think you should be. Surely a little decency cannot be so difficult to find.” Zara returned to the fence where she stood with her head cocked slightly to one side.
“How did you know my name? I did not tell you.”
“I… I don’t know,” Salvador stuttered, “I just knew.” 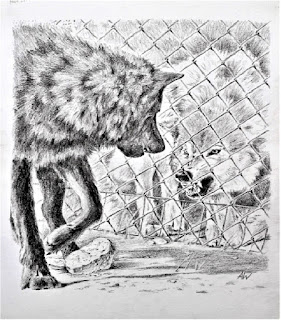 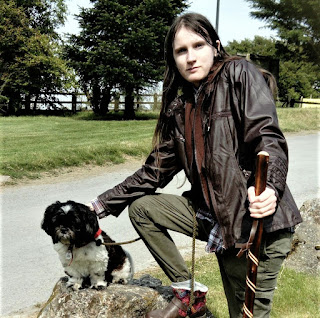 Elizabeth Jade was born in 1998 in Northallerton, North Yorkshire, England, but moved with her family to Wellington in Somerset when she was very young. Her early schooling did not go smoothly, and as a result, she was home-schooled from the age of seven. Her parents soon learned she had a unique slant on life and quickly abandoned attempts to follow the national curriculum in favour of child-led learning.
Elizabeth stumbled into writing at the age of fourteen when she began to suffer from anxiety and depression and quickly found her story ideas pouring out faster than she could get them onto paper.  It wasn’t until the age of eighteen that she realised her struggles in school had been due to Aspergers Syndrome (an autistic spectrum disorder).
As an enthusiastic animal lover, Elizabeth volunteered first at the Conquest Riding Centre for the Disabled and then at St Giles Animal Rescue before moving on to the Cats Protection Homing and Information Centre.  Her gifted way with the cats quickly earned her the title of ‘Cat Whisperer’ from the staff. Since she had always possessed such a way with animals, it was only natural for her story ideas to revolve around them.
Elizabeth’s personal experience as a young author with the challenges of autism, depression and anxiety, along with her writing theme of acceptance and overcoming obstacles, have led to her having a junior school class named after her.
BOOK TRAILER
SITE  |  BLOG  |  GOODREADS
FACEBOOK  |  TWITTER  |  PINTEREST
INSTAGRAM
~~~~~~~~~~~~~~~~~~~~~~~~~~