Today, we're sharing an EXCERPT along the Rachel's Random Resources tour featuring the work of Ellie Gray.  It's a book about putting the past behind us and accepting second chances.  Sound like a match between the story and you?  Then let's get exploring as we climb between the pages of today's title in the spotlight... 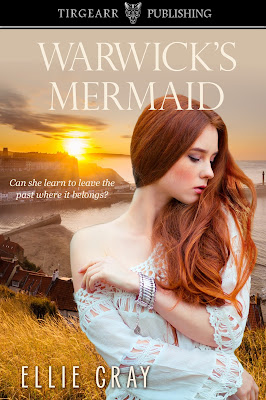 Warwick's Mermaid
by
Ellie Gray
About the book...
Having escaped an abusive relationship, Chloe MacGregor is determined to put the past behind her. The little cottage high up on the cliffs overlooking the beautiful North Yorkshire town of Whitby is her safe haven, somewhere she is free to be herself.
When the arrival of her new neighbour and boss, Luke Warwick, threatens her peaceful, sheltered life, Chloe is forced to confront her past and to re-evaluate who she really is. Falling in love with Luke is not part of her plan but, to her surprise, Luke is falling for her too. The only thing preventing their happy ever after is Chloe herself. Will she ever truly learn to leave the past where it belongs?
AMAZON  |  SMASHWORDS
APPLE  |  NOOK  |  KOBO
~~~~~~~~~~~~~~~~~~~~~~~~~~~~~
~~~   EXCERPT   ~~~
This is an extract from the prologue. Having suffered domestic abuse at the hands of her boyfriend Chris, Chloe has taken the decision to leave him. With the support of her friend, Rebekah, they are collecting Chloe’s belongings from the house she shared with Chris. Chloe has determined that she is going to take control of her life, and the end of this prologue marks the start of Chloe’s journey.
It was football this time; football and beer. His team had lost and, downing his fifth can of beer, he had turned to her, obviously looking to pick a fight so he could vent his frustration. Chloe couldn’t remember what it was he had said, but she had responded non-committally before asking him if he wanted a coffee—a somewhat obvious effort to change the subject. But he hadn’t let it drop, blocking her path as she tried to walk into the kitchen. Her stomach rolled as she recalled Chris pushing his contorted face into hers as he yelled at her through gritted teeth, backing her up against the wall and knocking over the plant stand by the fireplace as he did so.
She closed her eyes. It had been her fault. If she had just let him carry on, he would have calmed down eventually. But she hadn’t. She had pushed him away, pushed at his chest as he crowded in on her. And that was all it had taken. Any ounce of self-control Chris might have had went flying through the window, just as she went flying through the air when he grabbed her hair and threw her across the room.
She could remember lying on the floor in a daze, wondering what had happened, and Chris dragging her to her feet before punching her in the face. That was when she had fallen across the coffee table, her cheek grazing the corner as it tipped over and spilled the magazines to the floor. A kick to the ribs for good measure had followed, with Chris standing over her, his breath coming in harsh rasps, before he turned away and went upstairs, hissing, ‘You’re not worth the effort.’
‘Chloe? You okay?’
Rebekah’s gentle voice broke into her thoughts and Chloe blinked, unable to speak for a moment. ‘Um…yes. I just need a couple of things from here.’
She hurried over to a bookshelf and took a handful of books before casting a final glance around the room, sick with fear that Chris might return at any moment. There was very little here that she could call hers; Chris’s minimalist taste left little room for any of her personal items. Anything she had bought herself had either mysteriously gone missing or been accidentally broken.
Sorry, babe, don’t know what happened there. Never mind, it wasn’t expensive, we’ll get you something else.
‘I think that’s it. There’s nothing else here I want.’ Following Rebekah out of the house, Chloe locked the door and posted the keys through the letterbox. With a final look along the street, she walked back to her car. She was worth more than that.
~~~~~~~~~~~~~~~~~~~~~~~~~~~~~~
About author Ellie Gray... 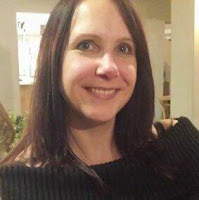 I’m a contemporary romance author, published with the lovely Tirgearr Publishing, and am a proud member of the Romantic Novelist Association. I live in the beautiful East Riding of Yorkshire in the UK and, although I work full-time in the public sector, my favourite pastime, when not writing, is wandering around old stately homes.
My debut novel, Beauty and the Recluse, was published in February 2016, closely followed by my second, Love on the Nile, which was released in the Summer of 2016. My third novel, Warwick’s Mermaid, was published in October 2017 and I’m currently working on my fourth.
A few random pieces of information about me:
Favourite TV shows – The Walking Dead, The X-Files, Nashville, Dr. Who, the Great British Bake-off.
Favourite Music – I’m an 80’s girl!, country, sixties, Elvis, classical (when I’m writing)
Favourite Food – Indian, tapas, crisps
Favourite Drink – black coffee (copious amounts when I’m writing) sauvignon blanc
SITE  |  FACEBOOK  |  TWITTER  |  PINTEREST
~~~~~~~~~~~~~~~~~~~~~~~~~~~~~~~ 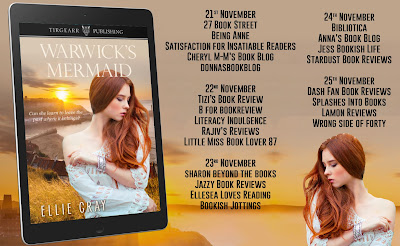