The Cat That Changed America by Tony Lee Moral - REVIEW!

Hi there!
Welcome back to Satisfaction for Insatiable Readers.
Today, we're shining the book spotlight on a title that recently celebrated its book birthday and is all about P22.  What's P22 you may ask?  Good question!  P22 is actually a MOUNTAIN LION...yes, a mountain lion, named after the area in which he finally settled, but his journey to that location was anything but easy.  So, this is the fictional telling of his true story ready for young readers through adults who are looking to not only be entertained, but to learn more about wildlife conservation, and how humans changing the environment they are use to creates a much larger impact that at first imagined.  Ladies and gents, I present to you today's ebook of choice... 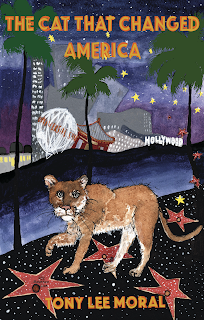 The Cat That Changed America
by
Tony Lee Moral
Illustrated by
Louise Goves
About the book...
Based on a true story with an imaginative retelling for young readers;
P22 mountain lion is born in the beautiful Santa Monica Mountains outside Los Angeles, California.
But he is forced out of the mountains by Prime, a fierce older male lion who wants him dead.
He heads east to stake out a new territory of his own in the bright lights of the big city.
Along the way, he makes friends as well as enemies, and crosses two freeways, the 405 and 101.
He passes through the City of Stars at night, and strolls down the Hollywood Walk of Fame, all the while trying to avoid those bothersome humans.
After more adventures, he reaches the edges of Griffith Park. Can he make it his new home?
AMAZON  US  |  UK
~~~~~~~~~~~~~~~~~~~~~~~~~~~~~~~~~~ As I said...this is quite an eye opening tale!
It takes us from the "childhood" days of a young mountain lion, living with his mother and brother, hunting food, fighting for territory, and steering clear of Prime.  As time goes by and the brothers get older, nature takes its course and it's time for the brothers to move on.  One is eager, but does not heed the warnings given by his mother; the other, reluctant...yet when all the cards are on the table and secrets come to light, he can see no other way, and forges ahead to find a life of his own.  Thing is, today's world isn't as friendly to nature's creatures as mankind has turned their environment into our own concrete playgrounds.  Where are they to go?  How are they to hunt?  Is there a way for them to survive while we still move humankind forward?  Wildlife and human interactions have become more common place and that's something P22 struggles with as well, but he never gives up and with a few lucky breaks combined with his determination, he finally finds a new home.
Based on a true story, P22's tale is being used to highlight the affects of our advancements on the lives and habitats of those creatures that were here before us.  So, what do we do?  Do we simply stop our advancement...I mean, does that sound like something people would be willing to do?  Or perhaps there is another way, a way that allow us to not give up ground we've made, but allows us to live side by side without impinging on each other's territory.  Reading about the wildlife crossing project was enlightening, and definitely sounds like it has potential to aid in achieving some sort of balance once again.
So, read it for the story, read it for entertainment, read it for the environmental messages that lie within and share those threads out in the real world to bring awareness to a problem that will only get worse if no one takes that first step.  Great for the kiddos as well as adult readers with just enough illustrations to keep you in pace with the story.
~~~~~~~~~~~~~~~~~~~~~~~~~~~~~~~~~~
About the author... 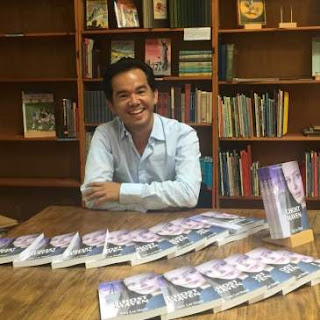 Tony Lee Moral is an author specialising in mystery and suspense, as well as natural history, children's and YA fiction. He has written three books on the Master of Suspense, Alfred Hitchcock: Alfred Hitchcock's Movie Making Masterclass (2013) published by MWP books; The Making of Hitchcock's The Birds (2013) published by Kamera Books and Hitchcock and the Making of Marnie (2005) published by Scarecrow Press.
Tony was born in Hastings, England in 1971, before moving to California. He lived in Monterey and Big Sur for two years which forms the inspiration for his latest thriller Ghost Maven: The Haunting of Alice May, which is published in a new edition in October 2020 for Halloween.
His latest book for young readers is The Cat That Changed America, based on his 2017 documentary about P22 mountain lion, who made an incredible journey from the Santa Monica Mountains to Griffith Park, crossing two major freeways, in search of a new home.
Websites
www.tonyleemoralbooks.com
www.ghostmaven.com
www.alfredhitchcockbooks.com
www.thecatthatchangedamerica.com
GOODREADS  |  FACEBOOK  |  INSTAGRAM  |  TWITTER
~~~~~~~~~~~~~~~~~~~~~~~~~~~

Special thanks to author Tony Lee Moral for the ecopy for review.  (THANKS!)  For more information on this title, P22, the author, or his other works, feel free to click through the links provided above.  This title is available now, so click on over to your favorite online retailer to snag your copy today.
Until next time, remember...if it looks good, READ IT!
Posted by Gina at 12:00 AM

Email ThisBlogThis!Share to TwitterShare to FacebookShare to Pinterest
Labels: 2020, based on a true story, children's fiction