RRR presents... INTO THE VOID by Christina O'Reilly - EXCERPT!

Today, we've got another Rachel's Random Resources tour filled with bookish delights to whet your reading appetite.  The main course...a mystery with potentially deadly consequences.  So, are YOU ready?  Then keep reading because our title in the spotlight is ready and waiting... 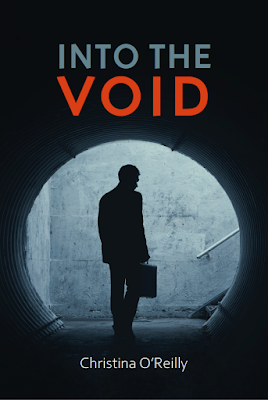 Into the Void
by
Christina O'Reilly
About the book...

How easy is it for a man to simply disappear?

When rural banker Richard Harper is reported missing, DSS John (Archie) Baldrick and DC Ben Travers are drawn into the tangled details of the man’s life. Would Harper really have chosen to leave his seriously ill wife, and abandon his pregnant girlfriend? Or is there a real threat behind the abusive emails he’d been receiving from desperate clients in the wake of the Global Financial Crisis?

On the home front, Archie’s marriage is rocky and his two teenage daughters are giving him all sorts of trouble. The frail but beautiful Helena Harper and her magnificent house offer an oasis of calm as Archie struggles to discover who is responsible for her husband’s disappearance. Has he really been abducted, tortured or killed? Or is Richard Harper himself behind everything that has happened?

Archie and Travers ultimately face a race against time as the case descends into a bewildering morass of obsession, violence and murder.

Finalist in the 2020 Ngaio Marsh Awards for Best First Novel

Introduction: This is an excerpt from Chapter 1 at the very beginning of the book. It’s a gentle opening, involving scene setting and an introduction to the main characters.

The street was like any other in the outer suburbs of a minor New Zealand city, tree-lined with concrete footpaths on either side of the road, though this area was rather more moneyed than most. The well-maintained houses had a solid, settled appearance about them and the gardens, although small, were scrupulously tidy. The sort of neighbourhood where people frowned at you if your lawns got too long, Archie thought rather sourly.

‘Remind me why we’re wasting our precious time on an adult missing person, would you, Travers?’

Beside him at the wheel, Detective Constable Ben Travers took a corner rather too sharply, causing Archie to wince in pain as his back muscles contracted. ‘And lighten up on the boot, for God’s sake,’ he grumbled.

Immediately, the car slowed to a crawl, throwing Archie forwards in his seat. He sighed as his lower back twinged again.

‘It’s this woman’s husband, Richard Harper,’ Ben said. ‘He didn’t return from a business trip a couple of days ago. She called it in and we gave her the usual spiel about not worrying, and that he’s bound to turn up sooner or later, but now it’s been twenty-four hours. Since then the guy’s bit on the side has also rung the station saying he would never have run off without her, so where is he? So yeah,’ Ben continued vaguely as they took the next gentle corner at a snail’s pace. ‘Oh, and Mrs Harper is apparently chronically ill so that’s why we’re going to see her, rather than her coming to us, boss,’ he added.

Archie frowned as he gazed out of the window at the passing houses, which were gradually becoming larger and set in more spacious grounds − the posh end of the street.

‘And I’d say that’s another reason why we should be taking this case seriously,’ Travers added. ‘I mean, what kind of a man would deliberately run off and leave his sick wife?’

Archie turned to look at Ben’s twenty-four-year-old profile. ‘The kind of man who’s sick of his sick wife,’ he said. 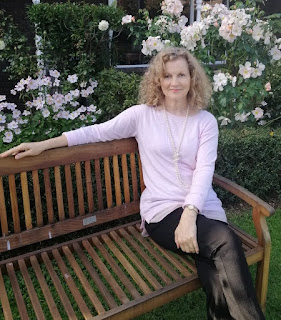 Christina is an author and proofreader living in the Waikato region of New Zealand. Several of her short stories have been published in anthologies, most recently in Fresh Ink: A Collection of Voices from Aotearoa New Zealand 2019. Into the Void is her first crime novel and was longlisted for the Michael Gifkins Memorial Prize in 2019. It is also a finalist in the 2020 Ngaio Marsh Awards for Best First Novel.
FACEBOOK
~~~~~~~~~~~~~~~~~~~~~~~~~~~~ 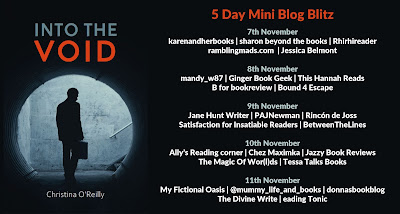