Today, we're bringing you the THIRD and FINAL INSTALLMENT of the ever fabulous series entitled A Perilous Journey of Danger & Mayhem by the ever fabulous Christopher Healy from the ever fabulous team at Walden Pond Press!  Did I mention that it's FABULOUS?  Oh, good...because THAT was exactly my aim!  If you've been with us for the first two installments, you're well on your way to brimming over with EXCITEMENT to find out just what DANGER the Peppers and friends are getting themselves into, out of, and around this time around, not to mention so very curious to see if Rector reappears, Molly, her mom, and the MOI get their day, and whether Robot remains the ever loving surprisingly memorable character he was.  If you're NOT familiar with the series, then the last REALLY LONG sentence didn't mean that much memory wise, but I'm sure it sparked your curiosity at the very least.  Am I right?  GREAT because we're not putting the breaks on this runaway train until we're finished, and right now, we're clearing the stage for today's blog tour guest and ebook of choice... 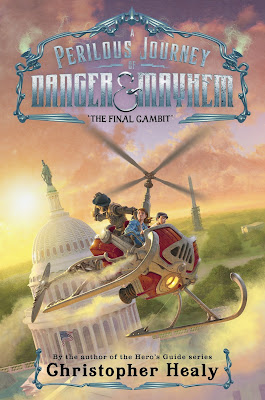 The Final Gambit
A Perilous Journey of Danger & Mayhem, Book 3
by
Christopher Healy
Walden Pond Press
About the book...
The thrilling conclusion to Christopher Healy’s funny, action-packed, acclaimed alt-history adventure!
It is 1884, and Molly and Cassandra Pepper,
Emmett Lee, and Emmett’s long-lost father are sailing back to New York following their death-defying adventure in Antarctica. Having discovered a subterranean world at the South Pole while saving the world from certain doom once again, surely their accomplishments will finally earn them the recognition they deserve.
Unless, of course . . . well, you know by now.
And so do the Peppers and Lees. They’re used to having
their deeds covered up by the government in order to
protect powerful men, and frankly, they’re sick of it. And
when their return to New York doesn’t go the way they’d
planned, they decide that maybe it’s best to go into hiding
and accept that, perhaps, the forces aligned against them are just too great.
As the 1884 presidential election approaches however, our heroes discover a plot against leading candidate Thomas Edison that only they can stop. It’ll be up to them to decide whether to come out of hiding, make the perilous journey to Washington, D.C., and do the right thing one last time. Even if it means risking everything they have left.
~~~~~~~~~~~~~~~~~~~~~~~~~~~~ 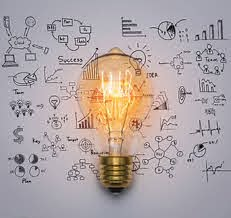 This was a FABULOUS way to say adieu to a series that has taught us so much, entertained us to no end, and both broken and mended our hearts a million times over.  The Peppers and the Lees are remarkable, the ladies of the MOI (Mothers of Invention, for those not already in the know) are inspiring, Rector abysmal, but you have to give him credit for tenacity (and that goes for Agent Clark as well!), Dr. Stinkums who was an unexpected new addition to the group (and a actual genius in doggy form!), and Robot whom one wouldn't think could be but was the heart of them all.  There is so much to love here and only so much space on my post (at least before I bore you to tears because I keep going and going and...well, you get the picture), but I will try to sum it all up.
This adventure will take our motley crew turned family across the globe.  From Antarctica to the high seas, Florida to New York, a great hidden place you wouldn't think of to Washington to another place you wouldn't think of to...well, they globe trot, that's for certain, and in some very creative ways, and always for a good reason which usually ends up with them trying to save the population from the likes of the diabolical mastermind (Rector) with no one in power believing them until it's much too late.  *deep breath*  Anyway...Molly and Emmett take the helm in this one and while yes, they get into trouble, A LOT, they have a plan to follow, and their hearts to guide them...because seriously guys, no one listening to their minds only would undertake the dangers and perils they do!  They could've just said no.  They could've ignored the signs.  They could've said I'd rather live this quiet life and not run from danger, agents, and everyone else since I'm now on the most MOST wanted list, thank you very much....but they didn't.  They CHOSE to do the right thing.  They used their hearts and their minds to figure out the troubles they get into.  They reinvent the wheel, if need be, to get the job done, and they never give up on each other.  Oh yes, times get SERIOUSLY tough, and they may want to put down their burdens and say no more, but they are there for each other and pull each other up when down, never letting the odds win against them.
So to summarize my summary, it was a wild and crazy adventure filled with danger, peril, and heart.  It showed us that anyone can do anything they put their heart and mind to, we CAN in fact choose our family, and just because one doesn't have an actual heart that beats, it doesn't make them any less human.  If you're looking for adventure or even to simply be inspired, this is the series for you!  Oh and don't worry, I won't tell anyone if you're just getting started in it...that just means you get read straight through without any of the wait time for the next adventure.  (Woot woot!)
~~~~~~~~~~~~~~~~~~~~~~~~~~~~
About the author... 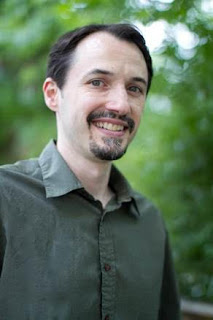 UP FOR GRABS...
(1) copy of THIS VERY BOOK!
Okay, well not "of this very book", but rather....
A Perilous Journey of Danger & Mayhem: The Final Gambit
by Christopher Healy thanks to Walden Pond Press!
*Open to US residents only; no PO BOXES please
Entries accepted through midnight 12/19/20.
Winner will be drawn, contacted, and have 48 hours to respond with their full mailing information which will be sent to the publisher for prize send out. If no response is received, a new winner will be chosen. SFIR is not responsible for lost prizes or those not received.
~~~~~~~~~~~~~~~~~~~~~~~~~~~~~~~~~
Special thanks to the Walden Pond Press team for the chance to bring this tour to you as well as the copy for review. (THANKS!) For more information on this title, the author, or the publisher, feel free to click through the links provided above. This title just celebrated its BOOK BIRTHDAY last month, so be on the lookout for it on a bookstore shelf or virtual retailer of your choosing. Be sure to check out the rest of the stops along the tour for more bookish fun!
November 30 - Nerdy Book Club
December 2 - Novel Novice
December 6 - Unleashing Readers
December 7 - Satisfaction for Insatiable Readers
December 9 - Walden Pond Press
Until next time, remember...if it looks good, READ IT!
Posted by Gina at 1:09 AM

OOH! Fantastic covers, I'm so pleased that the books didn't disappoint. Definitely books to watch out for, they sound like they have it all.