Today, we've teamed up with Rachel's Random Resources to bring you a stop along their current promotion featuring a new Romance title that just so happens to take place around the holidays.  Coincidence?  I think not...and all the better for it!  So, let's slip between the pages of your next potential must read with today's featured title... 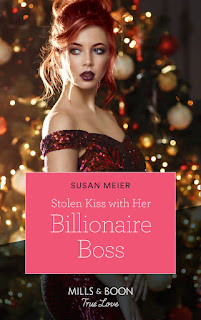 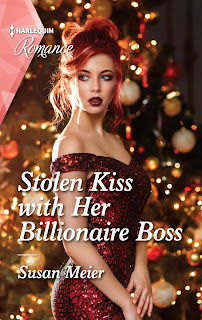 Stolen Kiss with Her Billionaire Boss
by
Susan Meier
Mills & Boon / Harlequin
About the book...
Christmas has arrived…
And she’s spending it with her boss!
New Yorker Erin is intrigued when Hugo Harrington asks for her help on a hotel renovation in London, just weeks before Christmas! But Erin soon discovers how personal this project is to her brooding boss. Watching him wrestle with the memories of his past uncovers a side to Hugo she’s never seen. And then a stolen snowbound kiss changes everything…
AMAZON  US  |  UK
💋   🎄   💋   🎄   💋   🎄   💋
~~~   EXCERPT   ~~~

In this scene Hugo and Erin both work late and discover they are trapped in Harrington Park Hotel because of an unexpected snow fall. He’s been noticing how gorgeous and easy going she is. She’s had a crush on him forever. A widow who isn’t ready to fall in love again, she thinks having a crush on him is no big deal because she’d never act on it…What she wasn’t prepared for is that he wouldn’t wait for her permission. LOL

He refilled their wineglasses and sat beside her. Not close. But not far enough away either. She could smell his aftershave and see every muscle move beneath his white shirt.

Not that she was looking.

Oh, hell, who was she kidding? She was looking. Being stuck together and having the best-tasting wine on the planet had softened her. Maybe even lowered her inhibitions. If she hadn’t been spending time with him for such a good cause—getting to know him, hoping to discover his secret so it didn’t tumble out at the wrong time and ruin their grand reopening—she’d be scrambling out of here. At least, excusing herself to go to her room, away from the hypnotic power of those beautiful gray eyes.

But wouldn’t that be a waste? They had a bottle of delicious wine. He was chitchatting like a friend. For the first time since she’d had Noah, she was having fun.

She laughed at her Noah-age reference.

Caught, she remembered her “no lie” rule and said, “Something popped into my head.”

He smiled at her. Simply. Beautifully. “What?”

She swallowed. It had to be the wine, but he was behaving like the man in her dreams. “Something Noah says when my mom’s having a bad day.”

She cleared her throat. Lord, he was gorgeous. And so muscled and male. She swore she felt heat radiating from him.

He slowly caught her gaze. “Top floor. Heat rises. I could turn on the air conditioning.”

He was only being considerate, but her chest tightened. Her mouth watered. Visions of things that had never really happened filled her head. Could things she’d imagined doing with him for so long actually be coming true? Her breath caught.

But something pulsed between them. With their gazes locked, he leaned in and brushed his lips across hers. Her heart fluttered. The wineglass between her fingers slipped a notch.

He caught it and set it on the coffee table in front of the sofa, along with his glass. Then he leaned in again. One hand on the back of the sofa, the other at his side, he slid his lips across hers again.

Arousal hit in a wave of longing so strong it made her bold. She slid one hand to his shoulder. He slid his hand to her waist, tugging her closer. His mouth moved over hers seductively, drawing her in, and she fell into the kiss, exactly as he lured her to with his clever mouth. Her other hand moved to his shoulder, and this time she was the one to pull him closer.

The kiss changed, deepened. With just enough wine to lower her inhibitions, she let her fantasies meld with reality and tumbled into the warmth surrounding them. Adrenaline competed with arousal for control. When his fingers went to the hem of her T-shirt, anticipation raced through her, and she shifted so he could pull it over her head. He tossed it behind him. 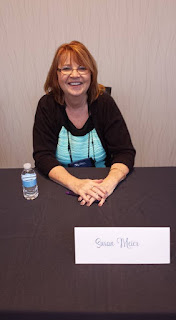 Susan Meier is a lover of a great story and a fabulous turn of phrase. What better home for her than Mills and Boon where stories touch the heart? She found her bliss when Harlequin published her first book and hasn’t looked back. A mom of three and wife to the best guy on the planet, she loves reading almost as much as writing, and thanks the heavens for the internet and YouTube which have made research so much fun.
SITE  |  FACEBOOK
💋   🎄   💋   🎄   💋   🎄   💋 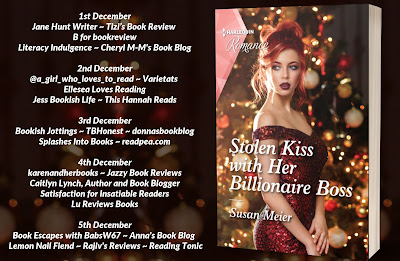