Hi there!
Welcome back to Satisfaction for Insatiable Readers.
The holidays are nearly here and what am I doing?  Working like a crazy woman (retail...ugh!), and reading up a storm!  Hey, we all need a break from the real world from time to time, am I right?  Anywho, today marks our third feature from Sourcebooks Casablanca seasonal selections and we're back in the saddle with a SPECIAL EXCERPT plus your chance to win!  So, grab your riding boots, and get ready, we're heading out for... 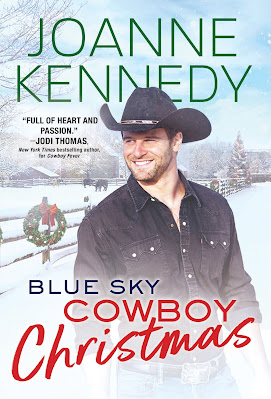 Blue Sky Cowboy Christmas
by
Joanne Kennedy
Sourcebooks Casablanca
About the book....
There’s no place like home…
Weary from a long deployment, Griff Bailey has been dreaming of a quiet Christmas on his father’s ranch. But all his hopes of peace are upended when he finds his one-time fling, Riley James, has moved in.
Riley swore off dark, dangerous men a long time ago, but Griff’s emotional scars pull at her heartstrings, and she desperately wants to help him heal despite their complicated past.
It’ll take a miracle for these two stubborn former lovers to open themselves up again, but isn’t that what Christmas is all about?
AMAZON  |  B&N  |  APPLE
KOBO  |  BOOKSHOP
BAM   |   WALMART
🎄   🤠   🎄   🤠   🎄   🤠   🎄
~~~   EXCERPT   ~~~

The snow globe on the dashboard rocked and sloshed as Griff Bailey’s Jeep dropped off the pavement onto the dirt road that led to his father’s ranch. The music-­box base tinkled out a few hesitant notes, but they were lost in the racket of icy flakes clattering on the windshield.

Griff had picked up the globe at an airport gift shop, remembering how his sister loved Christmas kitsch. He’d set it on the dashboard in an effort to inspire his own Christmas spirit, but it was just making him sad. There was Santa, the most senior of senior citizens, frozen forever with one foot in a chimney and a heavy pack slung over one shoulder while phony snowflakes swirled around him. It was obvious the bag wasn’t going to fit down the chute, and the jaunty, tinkling rendition of “Here Comes Santa Claus” was just plain rude. This Santa wasn’t going anywhere.

Neither was Griff, in the long run. Like Santa, he’d flown halfway around the world only to find his life shaken and stirred by unseen forces.

As the wipers thwacked out their restless rhythm, he saw a light burning in the distance.

He was surprised to find his heart lifting at the thought. His sole ambition from boyhood had been to escape the everyday sameness of ranch life, with its early mornings, late nights, and chores that were never done well enough, soon enough, or fast enough.

So why was he coming home?

Simple. The last place he wanted to go was now the only place that would have him.

At least, he thought they would. As far as his family knew, he was still deployed. His dad and stepmom were on an RV trip in the Southwest, while his sister was honeymooning in California. He wasn’t sure how long they’d be gone, but he was hoping for a couple weeks of solitude so he could shake off the dark memories that had smudged his bright military future. Bit by bit, day by day, he would become the man he’d been before.

Ghosts of the past rattled their chains in the back of his brain, threatening to rise and walk, but he knocked his head with the heel of his hand and sent them skittering back to their caves. He’d deal with them later. Right now, he needed to concentrate on the road.

As he nudged the Jeep around an icy curve, he laid eyes on his father’s house for the first time in four years—­and slammed on the brakes, sliding sideways, feeling the tug of a snowdrift hauling him into the ditch. White-­knuckling the wheel, he spun right, then left, and lurched to a sudden stop that slammed his chest against the shoulder harness.

Breathing hard, he stared at his childhood home. He’d expected to feel reluctance, nostalgia, even a surge of relief at the sight of it—­but all he felt was shock.

The entire front wall of the house was demolished, with beams and boards scattered like matchsticks in the snow. He might not be a fan of ranch life, but the Diamond Jack was the one safe, unchanging place in his world. And it had exploded.

Unbuckling, he opened the door and fell to his knees. A low buzzing began inside him, blind bees bumbling for a way out. They were with him every day, simmering beneath any emotion he dared to feel, pushing for release in a roar of rage, a howl of fear, a savage strike at something, anything. But releasing them would make the outside world match the darkness inside him, so he held them in.

The docs ought to give him some credit for that. They ought to let him go back. They would if he could control it, so he followed their advice.

As he drank in the cold air, the buzzing faded and died.

Surprised, oddly empty, he rose to his feet and trudged toward the house through snow up to his thighs. It was slow going, but that gave him time to assess the situation.

There were lights on in the upstairs bathroom, his sister’s bedroom, and the kitchen. That was all wrong. Nobody was supposed to be home. And what was that weird shape in the wreckage? Had it moved?

Holy crap. What is that?

It looked like an animal—­one with beaming yellow eyes that reflected the Jeep’s headlights. Had he started hallucinating now?

Apparently not. The creature proved itself disturbingly real by launching itself from the wreckage and loping toward him with an awkward, lolloping gait. Feet like paddles flung snow all around, and its drooling jowls flapped as it ran, revealing long, white teeth that gleamed in the starlight. Those teeth were the last thing he saw before it leapt up and knocked him to the ground.

Pressing Griff’s shoulders into the snow with paws the size of dinner plates, the beast dripped a cold string of drool onto his cheek as its amber eyes burned into his with a passion for…

For pats, probably. Because it was just a dog. A big, weird-­looking dog, but a friendly one. As a goofy grin spread across its slobbery face, Griff heaved it off his chest.

The dog sat back and presented its paw as if introducing itself. Confused, Griff shook it, glancing around, and noticed a pickup in front of the barn.

“Shoot,” he mumbled. “I didn’t think there’d be anybody here.”

The dog shimmied close and leaned hard against him, tossing its head back and almost clonking Griff in the nose. It gazed adoringly into his face, and he suddenly felt better than he had in a year.

It might be nice to have a dog around. Trouble was, dogs generally came with people, and he wasn’t ready for people.

Joanne Kennedy is the RITA-nominated author of ten contemporary Western romance novels. The first book in her Decker Ranch trilogy, How to Handle a Cowboy, was named one of Booklist’s “Best Romances of the Decade.” She lives with her retired fighter pilot husband in a secret mountain hideout on the Wyoming border.
SITE
🎄   🤠   🎄   🤠   🎄   🤠   🎄 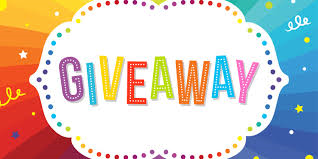 Special thanks to the Sourcebooks Casablanca team for the chance to bring this title to you. (THANKS!) For more information on this book, the author, the series, or the publisher, feel free to click through the links provided above. This title is available now, so click on over to your favorite online retailer to snag your copy today.
Until next time, remember...if it looks good, READ IT!
Posted by Gina at 6:08 PM