Today, we're shining the book spotlight on a title currently on tour with Rachel's Random Resources.  We've for a special excerpt to tantalize and tease...although the young lady at the center of it might not quite agree about the interest factor as she's going through a bit of an awkward group date and...well, you'll see.  Ladies and gents, let's get between the pages of today's title in the spotlight... 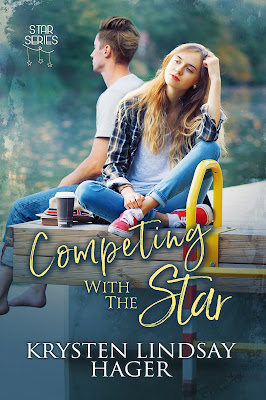 Competing With the Star
by
Krysten Lindsey Hager
About the book...
The perfect guy, the perfect location. What could go wrong?
Hadley Daniels’s life seems perfect. Before the beginning of sophomore year of high school, Hadley and her family move to a beautiful beach town, where she makes amazing new friends and lands the boyfriend of her dreams. She and Nick form a deep bond, but insecurity sets in when Hadley discovers her boyfriend once had a huge crush on her friend—who just happens to be the beautiful teen TV star, Simone Hendrickson. Nick claims to be over Simone, but then Hadley is blindsided with the news that Nick and Simone kissed after school. Now Hadley must determine who is telling the truth.
Love, betrayal, friendship…who needs TV drama when you’re busy competing with a star?
AMAZON  US  |  UK
~~~~~~~~~~~~~~~~~~~~~~~~~~~~~~
~~~   EXCERPT   ~~~
In this scene, Hadley is on an awkward group date that includes her new boyfriend’s ex who is going out of her way to remind Hadley that she was with Nick first. It’s a scene that echoes the awkward, uncomfortable dynamic so many of us have faced with mean girls and how we have dialogues in our head of what we want to say and do.
“So, how did everyone like the movie?” Nick asked.
Reagan giggled. “I didn’t see much of it.”
Nick’s face started to get red. Fabulous. It was obvious he noticed she had spent the movie kissing her new boyfriend. I tried to cause a distraction.
“Asia, did you like the movie?” I asked.
“Honestly, I didn’t understand, like, half of it. Who were the guys in black suits?”
“I think they were aliens or something,” Connor said.
Nick said that was what he thought as well and that was when Reagan spoke up.
“Oh, you actually watched the movie, Nick? Must be a new thing for you,” she said.
My face got warm and adrenaline shot through my body. Nick looked surprised and tried to change the subject by offering me some more soda, which he managed to pour onto my lap.
“Oh crap, I’m sorry,” he said, grabbing a handful of napkins. Then he realized it would be awkward to help me mop up my lap.
“I got it,” I said, trying to soak up the liquid. Charlotte grabbed more napkins off the next table while Reagan sat there with a smirk on her face. I envisioned myself hitting her in the face with the pitcher. Just one big smack…
“I’m so sorry, Hadley,” Nick said.
“It’s fine. I’m just going to get some paper towels,” I said, getting up.
“Oh wow, it looks like she wet her pants,” Morgan said.
“Except we all watched the Pepsi spill on her, so we know she didn’t,” Asia said.
I headed into the bathroom and the dark brown stain was so apparent on my jeans. There was no blotting it and going on with my night. And what was worse, I could feel it on my underwear. Ugh. I just wanted to go home and delete this night from everyone’s memory. I could wash my stupid jeans, but I couldn’t erase the picture in my mind that Reagan had planted of how she and Nick had obviously spent every movie date making out. I couldn’t have felt more jealous if I tried. And he hadn’t made any attempts to even hold my hand in the theater. I knew he liked me, but obviously he didn’t like me the way he had liked her. The bathroom door opened and Asia walked in.
“What was that?” she asked.
“I know. Could this night get more awkward?”
“Did you want to hit her with the pitcher or was that just me?”
“The word bludgeon does come to mind,” I said. “Were they…you know…did they…ugh! I don’t want to know, but…”
Asia hugged me. “I know, I get it. You don’t want to know, but now it’s out there and you can’t help but wonder what went on. I mean, yeah, Reagan is a little more…well, she was always in Nick’s lap. Like always. But in some ways, I think she annoyed him a bit. She was clingy and I don’t think he was into that.”
“So she was all over him when they were going out?”
“Kinda.” Asia shifted. “But he’s with you now. Not her.”
“Was that make out thing with Lucas because she likes him or to get back at Nick?”
“Probably a little of both. But again, he likes you.”
“Yeah, it’s obvious by the way he got so flustered by the reminder of their relationship that he tried to drown me.”
Asia burst out laughing. “You know what I mean. Here, stand under the hand dryer. It’ll get the worst of it.”
“I hate my life.” Between dealing with Nick’s ex’s little comments and the fact I felt so immature next to her, I also had the fact that Simone was acting odd around him too.
We walked back out of the bathroom and Nick was standing outside the door.
“Did I ruin your jeans?” he asked.
“They’ll be fine.”
“Asia, your dad’s here to pick you guys up,” Simone said when we got to the table.
Great, I’d be leaving and my maybe-kinda-sorta boyfriend could stay behind with both the beautiful former TV star and his ex to reminisce. Awesome.
Charlotte got up, and Asia grabbed her purse. “I’ll pick you up at two tomorrow, okay?” Nick said to me.
I nodded and followed the girls out of the restaurant. As we walked to the car, Asia put her arm around my shoulders. I got home and threw my jeans into the wash. I kept checking my phone, expecting Nick to text me, but the only one who did was Asia to tell me she hoped my stains came out.
~~~~~~~~~~~~~~~~~~~~~~~~~~~~~~
About the author... 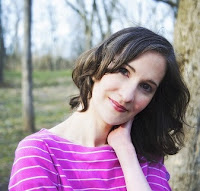 Krysten Lindsay Hager writes about friendship, self-esteem, fitting in, frenemies, crushes, fame, first loves, and values. Her work includes YA contemporary, middle grade fiction, and adult and young adult rom-coms. She is the author of True Colors, Best Friends...Forever?, Next Door to a Star,  Landry in Like, and Competing with the Star, Dating the It Guy, Can Dreams Come True, and In Over Her Head: Lights, Camera, Anxiety.
Krysten's work has been featured in USA Today, The Flint Journal, the Grand Haven Tribune, the Beavercreek Current, the Bellbrook Times, Springfield News-Sun, Grand Blanc View, Dayton Daily News and on the talk show Living Dayton. She received her BA in English and master's degree in liberal studies from the University of Michigan-Flint.
SITE | INSTAGRAM | FACEBOOK | TWITTER | PINTEREST
~~~~~~~~~~~~~~~~~~~~~~~~~~~~~~

Thanks so much for being on the tour!