Today, we're joining Rachel's Random Resources on another tour starring a novel of World War II...but it's not as you might assume! Though many deal with the events specifically DURING the war, or onset, this one starts in a similar fashion, but quickly diverts to life after the war...an area that, at least in my reading, has been little explored. So, if you're ready, join me as we take a closer look at today's blog tour guest and book of choice... 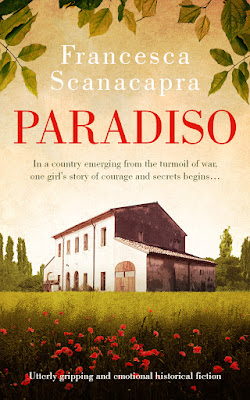 Paradiso
Paradiso Novels, Book 1
by
Francesca Scanacapra
9781913727062
Silvertail Books
About the book...
Italy, 1937. In a tiny village in rural Lombardy, Graziella Ponti is born into a loving family.
Though they are not rich and life is full of challenges, they are content and safe, surrounded by the tightly-knit community of Pieve Santa Clara.
But when the shadow of World War Two falls across the village with the arrival of Nazi soldiers, nothing in young Graziella’s life will ever be the same again.
Paradiso is Graziella’s story. It charts her loves, losses and triumphs as she grows up in post-war Italy, a country in transformation, freed from the shackles of dictatorship yet still gripped by the restraints of the Catholic church.
Paradiso is inspired by true stories told to Francesca Scanacapra by her Italian family and set in locations where she spent much of her childhood. It is a deeply affecting novel which sheds light on the complexity and trauma of Italy’s past and weaves it into the epic tale of an ordinary woman compelled to live in extraordinary times.
This stunning historical read is perfect for fans of Dinah Jeffries, Rhys Bowen, Victoria Hislop, Angela Petch and Heather Morris.
AMAZON  US  |  UK
~~~~~~~~~~~~~~~~~~~~~~~~~~~~ 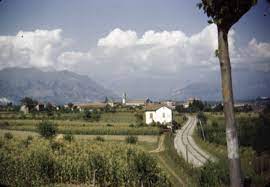 We begin in the Italian countryside as life is changing rapidly with the onset of World War II. People are scared, innocents are being killed, and to save their futures, many are sending their children to areas out of reach in order to escape the same fate. Here, we meet Graziella. This is her story as much as everyone else's, and it is through her eyes that we view the world not only during her time in a convent far away from her family, and the mishaps both she and her life experience, but the after.
Both times are rather compelling, though again, the "during" is not a focal point. Even though it only takes a small portion of our tale, it's easy to see how it shape many things that happen afterwards. I feel awkward saying it was refreshing to view this time period as it was after a war that ended so many lives, but it was uplifting in the sense that LIFE GOES ON. It doesn't mean those left behind bodily are gone, but rather their spirits come forward with us, help to guide us, and urge us to remember the hard lessons learned lest we be doomed to repeat them again.
Aside from the story itself, I admit, I enjoyed the characters ever so much, and a few that you wouldn't have expected to left their mark along the way. Graziella was a wonderful narrator/lead. She was a child of her age and generation, but her heart, her courage never failed to amaze. Immacolata, one of the unexpected I assure you, came to the rescue when you least expected, and my word did she pack a punch! Salvatorre though you were far from home and had nothing to go back to, you always made the most of things and were happy to share with others. The list goes on and on, but I'd rather you discover those on your own.
All in all, a great start to what sounds like a promising series and a high recommendation to Historical Fiction fans.
~~~~~~~~~~~~~~~~~~~~~~~~~~~~
About the author...
Francesca Scanacapra was born in Italy to an English mother and Italian father, and her childhood was spent living between England and Italy. Her adult life has been somewhat nomadic and she has pursued an eclectic mixture of career paths, including working as a technical translator between Italian, English, Spanish and French, a gym owner in Spain, an estate agent in France, a property developer in France and Senegal, and a teacher. Francesca lives in Dorset and currently works as a builder with her husband. She has two children.
~~~~~~~~~~~~~~~~~~~~~~~~~~~~

Special thanks to Rachel of Rachel’s Random Resources for the chance to bring this tour to you as well as the book for review. (THANKS!) For more information on this title, the author, this tour, or those on the horizon, feel free to click through the links provided above. This title is available now, so click on over to your favorite online retailer to snag your copy today. 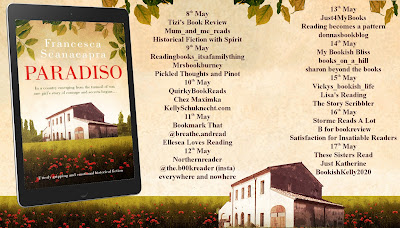 Good to hear of a novel set post war Italy. That it is inspired by true stories greatly appeals to me.