Today, we've got our sights set on a selection of children's titles available now via Peachtree Publishing. They've all released within the past month (give or take a few days), and are ready to be added to your reading wish list post haste! So, if you're ready, we're going to take a dive between the pages and invite you along...because the bookish waters are so very nice! Ladies and gents, gather round because there's a little something for everyone here... 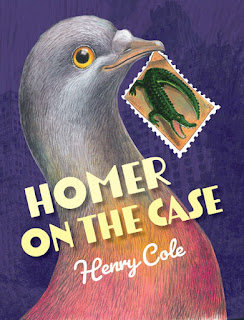 Homer on the Case
Written and illustrated by
Henry Cole
9781682632543
This is a classic sleuth novel perfect for readers that love to solve those 'whodunit' cases...except the detective is a pigeon, and the crimes lead to an altogether unusual criminal mastermind! Say hello to HOMER, a homing pigeon who has yet to be set lose somewhere and NOT find his way back home in record time. Thing is...he's also smarter than the average bird, but never boastful either. He's managed to pick up the human language, though unable to speak it, and loves nothing more than time spent with his favorite human boy, and to read the latest Dick Tracy comic conveniently lining his “home”. Good thing too because he'll need the skills he's picked up along the way to help solve a local crime spree, and with the help of a few other feathered (and non) friends, he just might be the one to crack the case!
It was quit the caper, and as I said, the ending was definitely unexpected! It'll keep you on your toes as you try to guess just what will happen next, hoping against hope that people will understand what he and Lulu are trying so hard to tell them as it gets down to the wire. A great way for kiddos to be introduced to the classic mystery and detective genres, while adults will certainly get a kick out of it too!
~~~~~~~~~~~~~~~~~~~~~~~~~~~~~~~~~~ 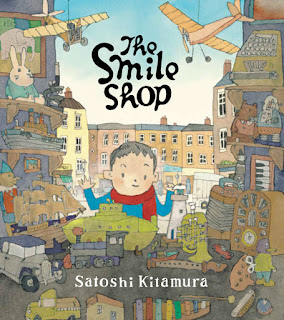 The Smile Shop
Written and illustrated by
Satoshi Kitamua
9781682632550
When a young boy heads out into his neighborhood to spend his precious savings, he's in for delight and disappointment. He delights in all that surrounds him, and the possibility of what he could buy...but when it all of a sudden disappears, he's down in the dumps. At that time, he steps into a very special shop...a smile shop, if you will...and discovers that even without coin or riches exchanged, some things are more valuable still, and can change a frown upside down in a hurry.
With a more sombre color palette, the illustrations in this one really leave their mark as they high the important things, the best things that life has to offer. It emphasizes that material things are all well and fine, but kindness shared, a smile given is just as important in our crazy, fast-paced world.
~~~~~~~~~~~~~~~~~~~~~~~~~~~~~~~~~~ 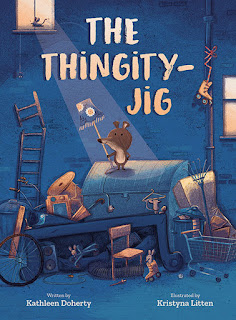 The Thingity-Jig
by
Katheleen Doherty
Illustrated by
Kristyna Litten
9781561459599
Okay first things first...our leading character is a BEAR. He's adorable, short, not so round, but probably fluffy, and definitely of the bear variety, which makes perfect sense to my over emphasis later on in the book, but remember, he's a bear...and a smart one at that! He's out and about when all his woodland friends are trying to sleep and discovers...a THINGITY-JIG...which is out of this world! He loves it so much, he wants to share it with his friends, and when they won't come to it, he ventures to bring it to them. Problem is, it's pretty darn big...bear or not...so what's a bear to do! Invent a ROLLY-RUMPITY, followed by a LIFTY-UPPITY, and so on until the job is done! They do say that need is the mother of all invention, and Bear has that determination, that creative spark to think outside the box. Combine that with his desire to share the fun he's discovered, and he's pretty much unstoppable...well, almost. The other mother, Nature, that is, has her say in the matter too, but it still boils down to a heartfelt story filled with wonderful illustrations that will kick that inventing gene into gear, while reminding readers that sharing is caring!
~~~~~~~~~~~~~~~~~~~~~~~~~~~~~~~~~~ 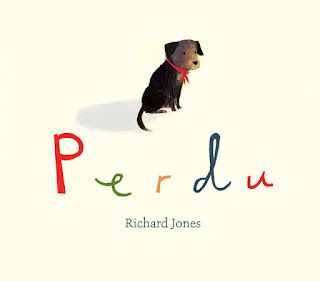 Perdu
Written and illustrated by
Richard Jones
9781682632482
Continuing in the vein of kindness and sharing, our next story to share features a little dog named Perdu. He's a wonderful little fellow with a red scarf to boot...but he's lost and alone which doesn't make for a comforting time! Though his travels take him near and far, a place to lay his head and rest his tired little feet seems hard to come by. After being chased from here and there, tired and hungry, ,he ends up at a little park...where it just so happens that a little girl with a big heart is about to return not only his lost red scarf, but a sense of security, and a heaping dose of love.
OH my, I was almost in tears reading this one! Though scant on words, the story, the images bring Perdu's plight to live and any animal lover will have their heart on their sleeve throughout the tale. I was so happy to see the little girl that had encountered little Perdu at various times throughout his journey appear before book's end. I just knew something GOOD was about to happen and the kindness she showed, the time she took, and the care she exuded were lessons to us all. It reminds us to take time to notice things around us, and care for more than simply ourselves. Even on our worst days, there's someone that may be worse off still, and showing a little kindness doesn't have to cost a thing.
~~~~~~~~~~~~~~~~~~~~~~~~~~~~~~~~~~~~~

Special thanks to Peachtree Publishing for the copies for review.  (THANKS!)  For more information about the titles featured above or the rest of their ever growing catalog, feel free to click on over to their site for more bookish wonders!
Until next time, remember...if it looks good, READ IT!
Posted by Gina at 12:00 AM