Today, we've got another Rachel's Random Resources tour swinging by and this time, the star of the show is a Romantic Comedy! So, get ready to laugh, get ready to smile, get ready to be revolted by some characters, and utterly charmed by others, as we dive between the epages of today's ebook of choice... 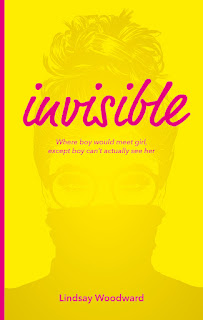 Invisible
by
Lindsay Woodward
About the book...
Alice Bloom has shut herself away from the world for years. But all that changes when three men come into her life. Firstly there's the rather disgusting Karl, who has the key to her problems but turns her stomach. Then there's smooth and sexy Ethan, whom Alice falls head over heels for, but she just can't seem to get time alone with him. And finally there's her lovely, supportive friend Dan, if only they could ever actually get to meet. Because the biggest problem of all is: Alice is invisible.
The complications become more and more hilarious as Alice tries to steer her way through her conflicting emotions and find her way to happiness. Will she succeed or will life always get the better of her?
AMAZON US | UK
~~~~~~~~~~~~~~~~~~~~~~~~~~~~~~~~~~~~~~~~~~~
Alice Bloom...
...woman of mystery or serious victim of circumstance?
You decide!
One moment she was a daughter going to college while her parents took care of the multimillion dollar family started security business...and the next, she was an orphan. Life is "funny" like that; she takes whenever she wishes and not often in fair values. Alice was struggling to handle the gravity of the situation and all that was thrust upon her, so she chose to hide herself away from the world for a time. The thing is, days grew into months grew into years...and while she was hiding away from the world, the world suddenly decided to hide her as well. Yes, my friends, her loneliness, her self exhile, manifested itself in the form of invisibility, but we're not talking The Invisible Woman who can turn it on and off. Alice has simply vanished without a trace, and little reason to believe anything will ever change her new norm. Little did SHE know!
So, I liked the concept, or rather was very curious about the concept, and learning how someone invisible would go about daily life was interesting, if not at times funny, but also rather sad. I mean, we've all FELT that way before, but to actually have it happen and for who-knows-how-long, is another story all together. When she is finally seen, I get it...it was a high for her, and a crutch because of the stipulations of her new seen self that she discovered inadvertently. Yes, there are some awkward moments, but she was willing to try in order to BE again...and yet it was with SO the wrong person. You could pity Karl. You could treat him like an overgrown puppy that was looked over and left to play by itself, and maybe get a little feeling going, but love between him and her was SO not in the cards. Next up, Ethan, the SO OVERLY SELF ABSORBED blow hard that it's amazing he fits through any door, let alone on the planet! No more comments on that one...except to say that sometimes things are NOT all they seem. Then there was Dan, and oh how I loved him! He wasn't the flashiest, or the one to first lay eyes on her (a point I actually felt disheartened by because if there were truer feelings between anyone in the book, it was him and our lovely lead), but he was definitely the one that really SAW her...and sometimes, that's the most beautiful feeling in the world.
To summarize, since I've obvious run away with myself here, Alice was a curiosity, and the turn her life took, oh so tragic, but the ending seemed well worth all the obstacles she encountered or self created. With several laughs along the way, it's easy to SEE why Invisible will be a title talked about long past its release.
~~~~~~~~~~~~~~~~~~~~~~~~~~~~~~~~~~~~~~~~~~~
About author Lindsay Woodward... 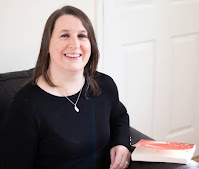 I'm a British author who lives in Warwickshire with my husband and cat. I've had a lifelong passion for writing, starting off as a child when I used to write stories about the Fraggles of Fraggle Rock.
Knowing there was nothing else I'd rather study, I did my degree in writing and I've now turned my favourite hobby into a career.
I write love stories with a twist, always leaving readers guessing right until the end. They're far from your normal romance stories, but a love story runs through the heart of all my books, with a sprinkling of something weird thrown into the mix.
When I’m not writing novels, I’m a Marketing Consultant specialising in copywriting, so words really are my world!
SITE | INSTAGRAM | TWITTER | FACEBOOK
~~~~~~~~~~~~~~~~~~~~~~~~~~~~~~~~~~~~~~~~~~~

Special thanks to Rachel of Rachel’s Random Resources for the chance to bring this tour to you as well as the ebook for review. (THANKS!) For more information on this title, the author, this tour, or those on the horizon, feel free to click through the links provided above. This title is available now, so click on over to your favorite online retailer to snag your copy today. 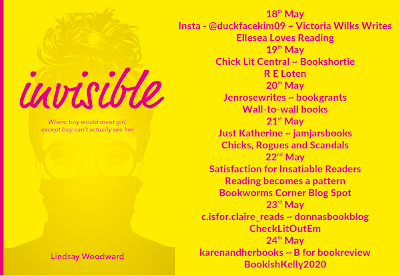