Hi guys!
Welcome back to the Sunday edition of Satisfaction for Insatiable Readers…the place to be any day of the week you’re in the mood for a literary feast.

Today, we’re more “snack size” than “feast” per se due to the book’s actual length, but while it may be short in pages, it definitely makes things up in the content department.  It’s an unusual book that reminds us of many things; first and foremost…do not judge a book by its cover.  If you always dreamed that someday your prince would come…well, today is not that day but it doesn’t mean that the lead character in our story doesn’t try to be….sorta; you’ll see.  Today’s book of choice is…. 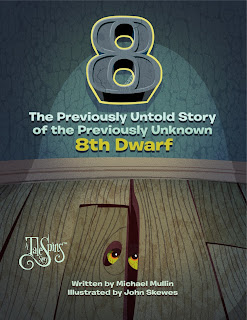 DO NOT...I repeat...DO NOT be fooled by its common place appearance for it is not what is outside (though the cover IS pretty good actually) but what is INSIDE that counts...and this book is for an older teen through adult audience despite it's storybook exterior.

Meet Creepy, the dwarf you didn't know about from the Ms. White (or would that be Mrs. Charming?) fairytale that most of us grew up with and probably still love in some fashion to this day.  Yep....Creepy was his name and being creepy was his game.  Is it any wonder that the other dwarfs had had enough of him?  I mean they were all "Heigh ho Heigh ho" let's get to work bro and he was all "I'd rather eat this spider you nincompoops".  *shakes head*  Yeah, it's amazing how he ended up on the cutting room floor.  But, I ask you this...does that excuse the other dwarfs behavior when determining that the best way to deal with said Mr. Creepy pants was to lock him away from the world? Sounds a little evil queen-ish to me, don't you think?  Anywho, where was I ...oh yes! 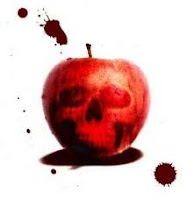 I stick to my original WARNING up there because though I did enjoy the twist on the old favorite, it is not one to lend to the little ones.  Creepy is well...a creep.  Now grant it, he didn't start life that way, more like he was a product of the constant jibs and jabs from his fellow towing-the-line dwarfs (*tisk tisk* …and a good reminder of the affects of bullying), but he is a creep nonetheless...and no, I don't just say that because of the spider bit.  His creeper side comes forward when "the maid" appears in their humble abode, uninvited and to warm fanfare.  Let's just say that due to his size, he'd be labeled a peeping Tom-little.  *-*  Yep, it takes it there; no major lines are crossed (or else my post would be steaming with less than mirth in my words), just don't use it as a bedtime story, okay? Moving forward…

The illustrations starting with the cover and then scattered throughout, highlight key elements of the tale without turning it into a picture book overall.  I’ve got to hand it to the illustrator, that creepy eye glaring out of the floorboards, definitely makes for an attention catching cover.  The rhyme and meter used stay on track even when the story takes it’s downward spirals…only to be lifted back up on the shoulders of one PO’d dwarf.  Fairytale redo’s can be hit and miss sometimes as I’m certain many of you have discovered along your reading journeys and although this one didn’t set out to reinvent the wheel, it did create a memorable off-color tale that is sure to entertain while encouraging readers to not only BE YOURSELF but BE ACCEPTING of others.  Imagine if everyone in the world was exactly the same…how utterly boring!  We need the cool and the not, the in and the out, the odd and the great, and everyone in-between…it’s what makes the world go round and a MUCH more interesting place. 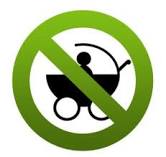 In conclusion, while it may not be one for the kiddos it certainly is one for young adults and adults that can still believe in some part of the magic we find in fairy tales.  It takes the story of one lost lonely girl running for her life, turns it on its head, adds a dash of dismal and a hint of unusual and presto changeo, delivers a story much more complete than meets the eye.  For the entertainment value alone, this one is worth its weight, but if you add in the unexpected lessons plus a little dark humor, it begins to show shines of pure gold.  Would I invite Creepy over anytime soon?  Heck to the no…but read his story?  Don’t mind if I do.

PDF for review courtesy of author Michael Mullin. (THANKS!)  For more information on the author, this title, the forthcoming graphic novel (no really, it looks good!), or his other works (including The Plight and Plot of Princess Penny which looks like a lot of fun!), be sure to check him out on GoodReads or Facebook.  Looking to pick up a copy of this to call your own?  It’s only available in ebook format but it IS at several sites including…Amazon, Barnes & Noble and Smashwords.

Loving quirky, this sounds like my kind of read.