CHANGE starts with YOU... …not just a song lyric, but a rather GOOD question and one I’d like to pose to you today.

Welcome back to Satisfaction for Insatiable Readers…the place that you come to when you seek a new reading suggestion but also a little something to chew on as well.  So, what say you, dear readers?  Should the past be merely forgotten like so many droplets off a duck’s back?  Should it be held onto for dear life until it chokes our futures out of existence?  Or should it be learned from, grown from and moved on from?  Is there really a correct answer here at all?  There is actually…but the one you view as “correct” all depends on your life experiences.

Today we are looking at the darker places of our world; those that we try to hide away from prying eyes because they shame us in some way when in reality, NO ONE is perfect and EVERYONE has something they’d wish was different about themselves or their lives.  It’s a Young Adult work of Fiction that could easily be reality for some…sad but true.  Without further ado, today’s hard hitting book of choice is… 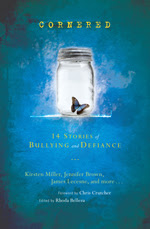 Cornered:
14 Stories of Bullying and
By
Rhoda Belleza

It does not necessarily take a fist to create a punch in the gut. This fourteen-story YA fiction anthology delves into the experience of being bullied—socially, emotionally, physically, psychologically, and sexually. The school hallways, walks home, and house walls are no longer the boundaries for intimidation and harassment. With the rapid-fire response time of social media and smartphones, bullying has lost all limits, and the lines among truth, lies, and real accountability have become blurred. Featuring some of the hottest voices in YA literature, both bestselling and on the rise, Cornered includes works from Kirsten Miller (New York Times bestseller The Eternal Ones), Jennifer Brown (Hate List), Elizabeth Miles (Fury), Jaime Adoff (The Death of Jayson Porter), Lish McBride (Morris Award finalist Hold Me Closer, Necromancer), Matthue Roth (Losers), Sheba Karim (Skunk Girl), Kate Ellison (Butterfly Clues), Zeta Elliot (A Wish After Midnight), Josh Berk (The Dark Days of Hamburger Halpin), and James Lecesne (Absolute Brightness and founder of the Trevor Project).

Perhaps the easiest way to sum up my read of this novel is to take a look at my GoodReads status updates for parts 1 through 7 …the rest, I’ll recollect my feelings at the time.  Here goes…

First story down...so glad she was able to overcome what happened to her in order to help others.

Second story...1st impressions are important but not always right. We can't simply trust our eyes blindly. .we must use our hearts as well.

Third story...hard pressed to feel bad for him after what he had done but at the same time, I'd have hoped she grew more than that.

Fourth story..it's reading things like this that make me appreciate flying under the "cool" radar in school. *shakes head*

Sixth story...I get it, but I don't. *torn* Such contrast between the two girls and their situations and yet they were able to relate to the others hard times equally so. 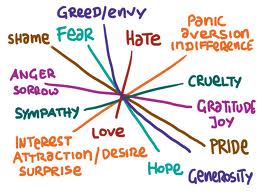 Seventh story...that was one of the hardest to read. ~shudders~ Such cruelty... we discover where the pent up anger came from down the line but my goodness, the poor kid!

Eighth story...glad he sorta got what was coming to him. Seen teacher issues like that before...gives a bad name to a good lot of people.

Ninth story…this was another one dealing with stereotypes and pre-conceived notions about society.  It made it hard for the friends to STAY friends as one sought “more power” the easy way instead of earning it.

Tenth story…a more artsy take on how harsh we can be towards one another, owning up to ones mistakes and paying the price we charged.  It also addresses keeping an open mind and accepting others for who they are, not who we wish them to be.

Eleventh story…this one hits all too close to home as I bet it will for many young girls. *hugs*  I definitely value Chloe’s strength even if she doesn’t view it that way.

Twelfth story…a sad reality for many youth’s especially in disadvantaged areas, but it doesn’t HAVE to be that way.

Thirteenth story…a surprising turn of events as the chased realizes they were viewed as a chaser.

Fourteenth story…I was a bit confused by this one, or at least how Brooke became a ghost, but nonetheless intrigued by how they expressed themselves and achieved the upper hand.

Really this one is a mixed bag but the common thread as denoted by the title is “bullying and defiance”.  One thing I noticed though is that sometimes the very people being bullied turned the tables on the bully-ers…and yet became bully’s themselves.  It’s a fine line between seeking an end to the torture inflicted by another and becoming the thing you are fighting against…so fine in fact that I’m not even certain I’m qualified enough to determine where one ends and one begins; I’ll have to let my morals do the deciding there.  Not sure what I mean?  You’ll see when you delve into this collection.  You can’t help but take a moment of joy, a brief smile time when the one that carried out the aggression's gets a taste of their own medicine…but at the same time, you also can’t help but see how “tit-for-tat” tactics are not going to but an end to anything; merely aid them in sustaining life beyond the current victim.  Something to think about indeed, and something to remember the next time you have the urge to pick on someone else or witness same said events transpiring… 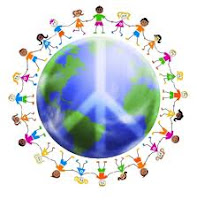 In conclusion, a hard read indeed but one that comes with a reminder of why phrases like “can’t we all just get along” aren’t as corny as they sound.  There is a lot of harshness going around in the world today…and I do mean A LOT.  Can we stop it all by our lonesome?  No, they’d be unrealistic.  Can we make a dent in the problem?  YOU BET!  How?  First, by making a concerted effort to NOT spread rumors, gossip, suppositions and the like; after all they may contain a kernel of truth or none at all, do you really want to be the one responsible for someone else’s bad day?  Second, by standing up for your fellow man…and woman; take a cue from the “What Would You Do?” show…which crowd reactions are you supporting more?  Those that stand by and let it all happen, or those that get safely in the mix of things to defend their fellow human’s rights?  Finally, by sharing our own experiences with each other; THIS is the kind of “word-of-mouth” that’s HELPFUL.  It can help heal old wounds, prevent new ones and creates a support network for those in need.  All you have to do is decide to be the HELPING hand not the hurtful mouth…

Recommended read for teen readers and beyond; the content can be hard to digest but it may also help to unlock some doors for those needing a way to broach the situations they themselves might be in with others.  Review copy received courtesy of Seta at Running Press.  (THANKS!)  For more information on this title as well as their complete catalog, be sure to visit them online, like them on Facebook or follow along on Twitter.  This book was released earlier this year so be on the lookout for it on a bookstore shelf near you.  Not able to jet to the store right this moment?  Seek thee out the online retailer of your choice.

Until next time...and happy reading!

Sounds like this would make a good resource for any school/youth club library.

Thanks for sharing this one. It sounds like a mixed bag, but with the different stories it can allow teens to connect with different characters and situations.
~Jess

Enjoyed your review! Anthologies are one of my favorites, and this is an important topic. Totally agree that we should be able to get along better...I mean, c'mon! It's the 21st century, yet we still have bullies and obnoxious behavior. *shakes head* Thanks for the review!

These sounds like great short tales to deliver much needed messages.