Fantasy Friday with... The Scholar, the Sphinx, and the Fang of Fenrir by A.R. Cook!

Today, I'm flying high thanks to a few wonderful authors I've recently conversed with (you know who you are) and the day's selected title.  It comes to us from an author who cut her teeth on books from a young age, even becoming a bookseller for a while in a chain store that I've very familiar with, and is bringing true Fantasy reads to the Young Adult genre.  Take it from me, the self proclaimed reader-of-many-things-but-high-fantasy-generally-isn't-one-of-them, it's reach is much wider than the niche group the cover and/or title may speak to.  Without further adieu, ladies and gents, today's book of choice is.... 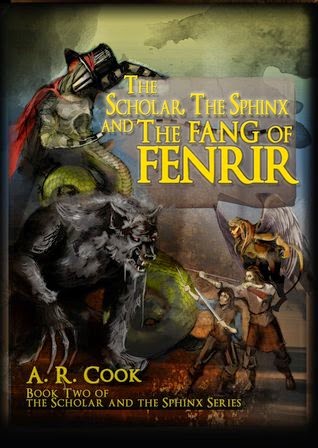 About the book...
Two years after saving Acacia, the last living sphinx, from the night goddess Nyx, David Sandoval is happily married and settled down to a quiet life in Paris. But soon new monsters are after him from the other side of the Curtain, which separates the human world from the world of myth and legend. David discovers that a world-devouring creature, Fenrir, has broken free of his prison and is hunting Acacia for something she possesses and if he gets it, he can finally fulfill his fate to consume all existence. Reluctantly leaving behind his loving wife, David heads off in search of Acacia and his friend Gullin, the Master Huntsman who is trained to slay the most dangerous beasts ever known. But there is great evil afoot. Madness itself wants to claim David, for what purpose, no one knows. And there is rumor than an old adversary has returned, quite different from the last time David and Acacia saw him... Those enemies are nothing, however, compared to the new incarnation of Nyx, whose desire for the most prized gift of all--Fenrir’s ability to destroy any world--will make him stop at nothing to attain it. The new god also knows what to do to ensure David will not interfere with his plans, as the young man did with the previous Night goddess. Old friends and new allies band together in this continuing adventure of the Scholar and the Sphinx, as both their worlds could soon come to an end. 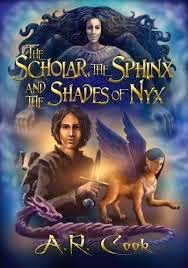 Being book 2 of a soon to be trilogy, it is HIGHLY recommended by this reader that you suck it up and READ BOOK 1 FIRST!  That's not to say you won't enjoy this one on its own, but everything makes much more sense if one has the background created from the first adventure.  Now, moving forward....

David "the Scholar" is BACK...and so are the baddies out to get him.  And his friends.  And his wife.  Oh, and pretty much ANYONE that tries to help him put an end to the proposed end of days occurring right now on BOTH sides of the Curtain.  Yep.  It's pretty dire.  Thank goodness David has a good head on his shoulders, a heart that beats true, and friends that would see him through to the end....even if some of them barely give that impression (more on that later).  It also helps that he saved the little wedding gift that Acacia left for him at the end of book 1 (< - see why it's important to read the first installment?).  They are definitely going to come in handy now not to mention the fact that they are actually much more than they seem; a statement that can be applied to almost everyone and everything in the story.  Things turn pretty bleak for David and company, but just when all seems lost, a ray of hope dawns like a new day.  Will it be enough to release both the magical and human realms from the fate that's been woven for them?  It might be....but that doesn't mean it's time to call it a WIN.  (Oh, you sneaky author you....that ending!  Ugh!  Where is book 3?  I NEED book 3, STAT!)  Suffice it to say that the story line will enchant, ensnare, and leave you ready for more. 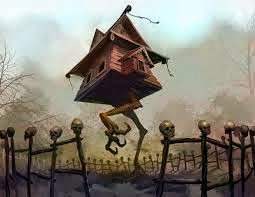 The darkness and light BOTH have roles in this story, as do many legends, fables, and myths.  It's one of those surprising reads that you not only enjoy for pure entertainment value, but you also learn a little something along the way.  From Nyx to the sphinx, spirit guides to the legend of Odin, there is something to pick up for every reader.  Speaking of those fabled persona though, I gotta say it...Baba Yaga was a hoot!  I mean, okay...she's a witch of fabled legends that's suppose to be responsible for all sorts of tomfoolery and dark deeds, but you know what?  Actions speak louder than words and right here, right now, she's ACE in my book.  She had me laughing with her off the cuff remarks, cringing at her outbursts, and rooting for her to actually be one of the good one's when the final page of the book was turned.  Did it turn out that way?  My lips are sealed but trust me, you're gonna LOVE her character...as well as that of her cat.

Continuing in the vein of characters, the usual suspects show up including Acacia (as beautiful and strong as ever), Gullin (a drink happy chap but with strength of body AND heart), and Tanuki (as feisty as ever).  There are a few that are unable to make an appearance thanks to the evil taking hold of the world beyond the Curtain.  Oh, that evil wears many a familiar face too, my friends.  From the new face of Nyx to Nico, and of course the world thirsty beast Fenrir out for revenge and more.  They are certainly shudder worthy. 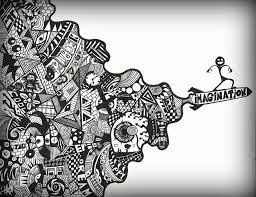 So, although 'Geras, Elli, and Baba Yaga sat down to play a hand of Bastra' may sound like the beginnings of a rather odd joke, it's actually one of many moments of mirth that are sprinkled throughout a wonderful YA Fantasy read I would highly recommend.  It has danger (giant, scary, rip-your-heart out Fenrir!).  It has love, both returned and unrequited.  It has unexpected friendships and uncommon strength found in the most unlikely places.  It'll keep you turning pages well into the night and leave you holding your breath as the last one turns.  My only dislike would be the cover.  I know, I know; we don't judge a book by its cover.  I totally adhere to that but I have to be honest, whereas Book 1 caught my attention, the same could not be said for this one.  Since I am not normally a pure fantasy reader, had I not known the author's work previously, I probably wouldn't have picked it up.  Sad but true.  That's one of many things I love about the book blogging community.  You can get to know reads that you might not have considered otherwise simply because a site you frequent or heard about, happened to feature it.  Recommended read for YA and Fantasy fans alike.  There's nothing to stop you here, except your own imagination.

Special thanks to author A.R. Cook for the SIGNED copy for review.  (THANKS!)  For more information on this release, the first, or the grande finale (COMING SOON!), be sure to stop by her official site, friend her on Facebook, or follow along on Twitter.  This title was released December 2014 via Mithras Books, the YA imprint of Knox Robinson Publishing, so be on the lookout for it on a bookstore shelf or virtual retailer of your choosing.

agree. agree. the windowdressing aka the cover are certainly not eye candy but the insides sound yummy. I see the logic of getting and devouring book one first. spoon. indeed I will. see that shows my determination to take your advice and enjoy thanks be to this fine author and my go to reviewer