Hi gang!
Welcome back to the weekend edition of Satisfaction for Insatiable Readers.

Today is the start of a TWO DAY blog takeover.  That's right!  Courtesy of Tandem Literary, today and tomorrow, we're letting a recent Harper release run rampant on the blog.  So, get ready, because we're going no holds barred, all out fun and featuring a fictitional rendering of an unrealized dream from the author's own reality...and perhaps you and yours too (*raises hand*). 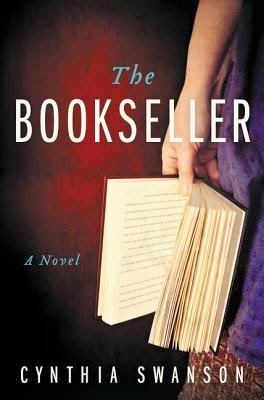 The book is The Bookseller, and the writer behind the work is Cynthia Swanson.  Who would have thought she had previously entertained  life as a bookseller?  I mean gosh, what a STRANGE dream, right?  ~whistles~  I mean, I know my friend and I would have never imagined doing something like that...for long at least. *ahem* Anywho, let's get on with the show and inside the mind of the one, the only, author Cynthia Swanson!

I Always Wanted to Own an Indie Bookstore! (Who Didn’t?)
By Cynthia Swanson, Author of The Bookseller (Harper, March 2015)

Back when I was young(er), single, and living in Boston, my best friend and I hatched a scheme to move to Burlington, Vermont and open a little bookstore. We would host author readings and have a small bakery out back, where we would make homemade cookies and sell those with coffee and tea, and have some tables set up so people could buy their books and their refreshments and hang out, and…and…and…

Well, you get the idea. We thought it marvelous and original. We went on a few reconnaissance missions to Burlington to scope out potential store locations. Neither of us had ever lived in Vermont, nor did we know anything about the business of selling books. It just seemed like a wildly romantic and adventurous thing for a couple of book-loving twentysomethings to do.

I’m sure you’re rolling your eyes about now. As you can likely guess, the bookstore in Burlington never happened. I moved to Colorado; my friend stayed in Boston. More than twenty years later, we’re both fortunate enough to have creative professions - hers as an inventor/artist, and mine as a novelist.

One of the wonderful things about writing fiction is that you can live vicariously through your characters. I never realized my bookstore dream, but Kitty, the main character in my novel The Bookseller, makes that dream into reality. The year they turned 30, Kitty and her best friend Frieda established a small bookstore called Sisters’ Bookshop. When the story opens, it’s a few years later - 1962 - and Sisters’ is struggling to stay in business as people take their shopping dollars out of small, urban neighborhoods and into large suburban shopping malls.

Nightly, Kitty begins to dream about another life - one in which Sisters’ is no longer and she and Frieda are not on speaking terms. Instead, Kitty is a married to the love of her life and has beautiful children and a stylish home. Is this the life she would have chosen, had she been given a choice? Can we make those life-changing decisions for ourselves - or does fate decide for us?

The Bookseller is about many things, but ultimately it’s about our choices in life. The concept emerged from a personal dream of mine that was never realized - but that seed grew into a story about how our lives take unexpected twists and turns, and we might not end up exactly where we thought we would.

Of course, I can't foresee what's to come, but from the vantage point of today, I don't think bookstore ownership is in my future. (But who knows? Look at Ann Patchett, author of numerous novels and non-fiction works, and now co-owner or Parnassus Books in Nashville. In her essay "The Bookstore Strikes Back," Patchett says she never set out to own an indie bookstore, either. But there she is.)
 

So I can’t say what will happen. What I do know is - now that The Bookseller is in print - I’ve realized another lifelong goal: that of becoming a published novelist. And I treasure this role every bit as much as I would have loved owning that little bookstore in Vermont.

Thank you so much for sharing Ms. Swanson!
I love how even though your dream as taken a new form, you haven't written off the possibility completely.  After all, if there were no bookstores in the world, you know, the actual brick and mortar type, it would be a sad, sad, SAD world indeed.
~sniff~

Special thanks to Meg at Tandem Literary for the chance to share this guest post with all of you.  (THANKS!)  This title is available now via Harper, so be on the lookout for it on a bookstore shelf or virtual retailer of your choosing.  Be sure to stop by tomorrow as I step between the pages and share my reading adventure RIGHT HERE on the site.

I got to live the dream for several years and loved my time as a bookseller! Unfortunately, the industry changed and the company I worked for stopped hiring book lovers and started hiring salesmen. Hated the daily quotas we had to meet, so eventually left. Would love to own my own bookstore one day!

Ah yes. I too was a bookseller and suffered a similar fate but to own your own bookstore? *dreamy sigh*