Kasey to the Rescue by Ellen Rogers

Okay, so that's not really a word, more of a sound effect but still it fits perfectly.  Too many visits from the bad luck fairy  to call it a success overall, but (I belief the words of singer/songwriter Natasha Bedingfield work rather well right here) "the rest is still unwritten". (Yeah, you hear me fairy of badness...I got your number...you're going DOWN!)﻿  Anywho...enough of my new year fighting plans, let's get this pony show moving...

Today's post is about a book (Surprise!  Just kidding...) that was an expected treasure.  When I embarked on this reading adventure, I admit it...I was expecting a cute story about a helpful little monkey.  Just take a look at the cover; Kasey and the young man's smile beam right off of the page.  What I REALLY got with this read was something so very much more...  Today's book of choice is.... 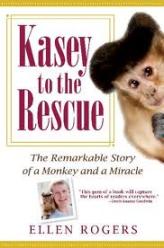 Kasey to the Rescue:
The Remarkable Story of a Monkey and a Miracle
by
Ellen Rogers

2005 was a year to remember in this household but not for the many good things that could and would happen, but for a terrible tragedy that touched their lives. Ned Sullivan, Ellen's 22 year old full of life son was in a car accident. The good news, he survived...the bad news, no one knew how long he would be able to hold on nor the quality of life he would live going forward.  With so many unknowns, it'd be easy to simply give up, who'd blame them...but those two words are not in this families vocabulary and that leads to the eye opening tale about to be shared.  This is more than just the story of a man and his monkey (and yes, I realize how that sounds...wait for the explanation). This is the story of a family thrown a curve ball of staggering size and what they accomplished as a "team" to work through, nay overcome (to a certain degree) the obstacles stacked in their way as a result.

From the eyes of a mother, Ellen Rogers takes on the role of author and shares the heart warming journey that her family (and extended family...including old and new found friends) has seen and lived through over the past view years. Each sunrise welcomed and sunset witnessed is a testament to their strength and willingness to do what needs doing in order to make the most of each and every day.  Their story reaches out to touch both your mind and your soul.  You can't help but feel for all of them as they struggle to make sense of something that is in its very nature senseless as their world is torn apart at the seams.  Misfortune dogged them at every turn, but they kept pressing on, moving forward, looking for the next hand hold no matter how small in order to make progress.

Let's not forget to give Kasey the little socialite that she is a moment in the spotlight.  (LOL.)  It's amazing all the things that these little guys, and gals, can do and quite frankly as long as the organization (Helping Hands:  Monkey Helpers) has been in existence, I'm surprised I've never heard of them before.  From opening containers to scratching noses, tying shoelaces to picking up dropped items, they are a wonder to behold even when seen merely in text.  All these things (and more) they can accomplish and they still lend their intellect to creating new ways to push and grow the strength of their "person" as well as share their love and friendship.  The love and undivided attention they share grew into a wonderful friendship that sees Ned through the rough times while providing a family structure she can depend on.  It may be true that time heals all wounds, in one way or another at least, but there is something to be said for companionship as well.

It's hard to say anything "bad" about this type of book as it's not a work of fiction; it's someones life story.  That being said though, there are two points that I would like to briefly comment on.  They are more along the lines of observations in the presentation or perhaps small lapses in the story shared that I being the insatiable reader that I am would have liked a bit more detail.  First up, the junction of chapters 1 and 2 where we take a flying monkey sized leap from Ned's accident right into....the life and times of baby Kasey.  Yep.  That was pretty much the transition.  You are in one place one moment and then dropped into the other the next.  This may be something that was cleared up in the final print copy (as I was reading my ARC of the book) but as it was, a tinge on the choppy side.

Second (and final) "issue" of sorts comes along a bit further into the story.  *WARNING:  POTENTIAL SPOILER AHEAD -- PROCEED WITH CAUTION*  The family never gives up on trying to find ways to increase Ned's quality of life and one stop along that journey was the Shepard Center in Atlanta.  It's a rehabilitation hospital of sorts, among the best according to the text.  During his stay at this facility, his mother has to leave for a week or two to get things together at home for his eventual arrival and move life along for the rest of her family.  When she leaves, he's still hard at work on increasing his levels of movement and communication the best he can.  When she returns...he can talk.  Grant it, it's slow and garbled but he can talk when he couldn't and was pretty much told he would never again...and the story moves on.  The only thing that I wish could have been different was any sort of explanation as to what changed during those two weeks as opposed to the prior two and so on that he was able to make this remarkable step forward.  Don't get me wrong, I was relieved to see such a huge positive change in his favor...but my curiosity begs to know a bit more.  *SPOILER OVER -- PROCEED*

When all is said and done though, a remarkable read overall.  It was truly a pleasure to share in their experience and one I won't soon forget.  Recommended reading for anyone seeking a look at a life being lived most remarkably as well as some great information on an organization I hadn't heard of previously....Helping Hands: Monkey Helpers for the Disabled. It's a rather interesting non-profit that aims to place specially bred, trained, and skilled capuchin monkeys with those suffering from spinal cord injuries or other mobility impairments; a cause certainly worth exploring.

ARC for review courtesy of Hyperion Books.  (THANKS!)  This book was published November 2010, so be on the lookout for it in a store near you.  For more information on this title as well as the publisher's full catalog, be sure to visit them online (where there is also a view great videos featuring the family in regards to their inspiring story) or follow along on Twitter.  To explore Kasey and Ned's story a bit more online, check out the book's website.  Interested in finding out more about the Helping Hands:  Monkey Helpers organization including a peek inside the monkey college and further success stories?  Stop by their site for a great learning experience.

I hope you have a MUCH better year this next year! i hope I do too!

this looks really great! what a cute cover!

That looks like a sweet book. Isn't it amazing the things people (and animals) can do?

Petty Witter: same to you and yours!

Carrie: It really was! Highly enjoyed it...

Jennifer: *nods* It truly is amazing what can be accomplished by even the smallest among us...