In My Mailbox is a weekly meme hosted by Kristi at The Story Siren.
Through her guidelines, your post does not actually have to be named the same and thus my post shall be..."In My Shopping Bag".  (just fits with the "foodie" theme a bit better in my humble opinion)
Let's see what's inside this week... 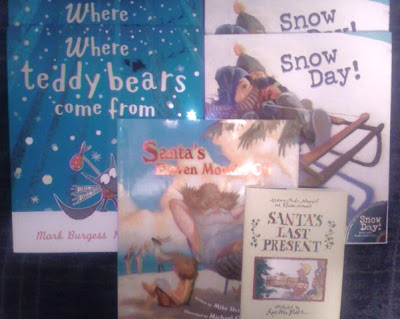 Where Teddy Bears Come From by Mark Burgess
Snow Day by Lester L. Laminack
Santa's Eleven Months Off by Mike Reiss
Santa's Last Present by Marie-Aude Murail and Elvire Murail
(courtesy of Samantha and Erin at Peachtree Publishers)
Let's just say that when this box arrived I was wearing a BIG smile.  Look at all the seasonal bookish goodness!  Needless to say reviews are coming very soon...oh and yes, those "duplicate" copies you see....giveaways.  Yep...all a part of the festive fun this month.  Stay tuned! 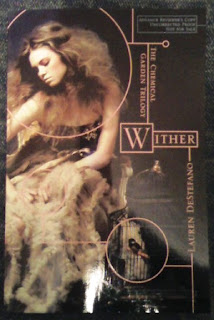 The Chemical Garden Trilogy, Book 1:  Wither by Lauren Destefano
(ARC courtesy of Lucille at Simon and Schuster)
I had been seeing this one around the blogosphere and was becoming rather curious to have a read of it myself when low and behold it arrived on my doorstep.  A very happy surprise indeed.... ^_^  This first book of the planned trilogy is set to publish March 2011...mark your calendars! 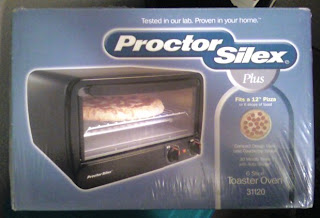 Okay so I know it's not bookish per se but it is a part of the fabulous package I got through CSN Stores...and just so happens to be on someone's wish list for the upcoming holiday so double win, don't ya think?  Be sure to check out the CSN site for access to their 200+ stores and the wide variety of products they carry.  Seriously good stuff... 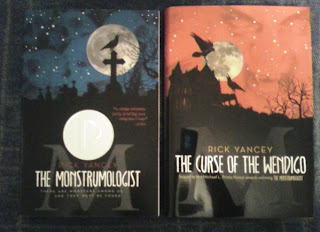 The Monstrumologist
The Curse of the Wendigo
by Rick Yancey
(via contest from Angela at Dark Faerie Tales)
I was certainly excited when I found out I won this set as I have been meaning to read book one since it originally released!  Can't wait to have at this set.  Oh and I must say that its arrival was extremely fast.  I won Thanksgiving weekend and it arrived about 1 week later....two thumbs up to Angela and the contest sponsor.  Thanks guys! 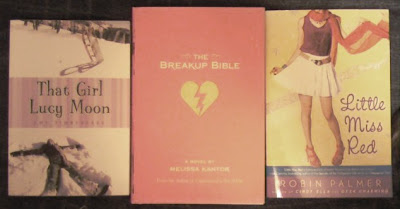 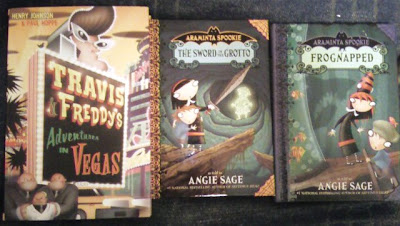 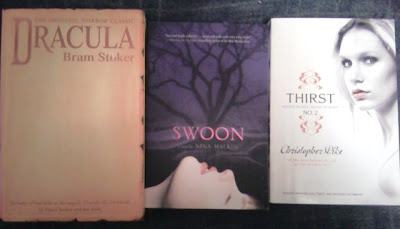 Dracula by Bram Stoker
Swoon by Nina Malkin
Thirst No.2 by Christopher Pike 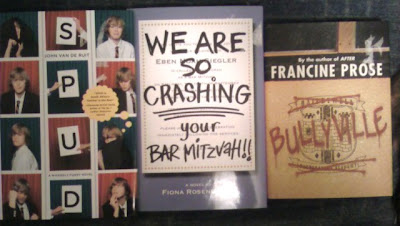 Spud by John Van de Ruit
We Are So Crashing Your Bar Mitzvah! by Fiona Rosenbloom
Bullyville by Francine Prose

...and last but not least, here's a pic of my little helper this week... 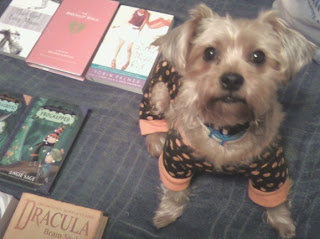 That's all for this week!
What did YOU get?
Do tell!

OMG! How cute is your dog! She looks like my dog, Scout! You had some awesome books in your mailbox this week. I am especially jealous of Wither. Can't wait for your review!

Your furry baby is so cute!
My little dog has sweaters and coats for when he gets cold. Poor thing doesn't have much hair ;)

Your puppy is SO bloody cute! I'm so jealous of everyone that got Wither haha I hope you enjoy it, and I can't wait to read your review of it :)

Wow, you bought a lot of books! Hope you enjoy Dracula, it's one of my all time faves.

Wow! SO many great books this week! Including ones from Peachtree (that we love! Snow Day & Where Do Teddy Bears Come From are some of our favorites.) and WITHER!!! Wahoo! I loved Wither, so good, we'll see what you think.

And ahhh...your little helper is so adorable! Love the pjs!

Oh Gosh, your assistant is really adorable :D And really photogenic, I must say! Perhaps you'd like to fearure her more often on here. I'm sure I'll be one of those who'll be waiting for her appearances ;)

p.s. I am SO jealous to see you got those Yancey books! Will be interesting to hear what you think of them! Have a good week, my friend =)

Christina: Yes...she felt the need to pose for the camera so of course I had to share. Wither was a surprise indeed...but a happy one!

Juju: Dually noted on the envy...LOL. ^_^ Your dog has a mini wardrobe too? Small world.

Melissa; Yep..and you know what, she knows it which can make her a bit of a brat at times...a loved brat but one nonetheless. Thanks for the reading wishes!

the1stdaughter: Yes, read a few of the Peachtree ones straight away, they were/are so cute! Wither was a total surprise so I'm anxious to learn more about it. Yes, she loves her pj's...and just laying around being held...but ler her "brother" take her toy and it's ON! ^_^

Shy: Isn't she? She loves to ham it up for the camera....when she'll sit still long enough. We shall see about her cameo appearances. ^_^ Yes, the Yancey books I've been meaning to read, so I'm curious to see if my anticipation for them was warranted...will see soon.