It's rather discouraging to have to use the tags "2010, RIP" at all let alone twice in one year and yet circumstances have occurred in which I must use them yet again. 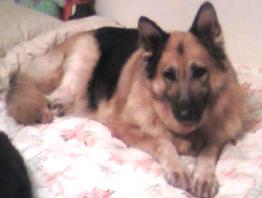 As some of you may know, my Mom's dog, Zoe, became strangely ill early last week.  It was rather sudden and all at once prompting a trip to the vet's office.  A few blood tests later, she was on her way home...the vet's diagnosis unable to be determined until the test results were back.  Friday morning delivered an urgent phone call from their office to bring her back in...her white count was very elevated, normally pointing to an infection at the very least, and they needed her brought back in ASAP.  Back in the car she went, making yet another trip to their office, this time she was being admitted...but nothing further was said as to what was at the root of it all.  Friday evening, another phone call.  This time they said that Zoe needed emergency surgery as she had a bad infection and without it, the outcome would be grim.  Though costly in nature, we agreed to proceed with no questions asked...she's a member of the family after all.  We'd figure it out.

Saturday morning, Mom and Dad went to sign the paperwork, though why the vet wouldn't let them do it Friday night or go with the verbal authorization is beyond me as they were perfectly happy to do so, and spend a little time with her before the procedure.  Mom talked with her, tried to comfort her, but she could tell she was not her self....15 minutes later they ushered them out so they could take her in and begin the operation.  20 minutes later, Mom's phone rang again....just as they were preparing to take her into the operating room, Zoe passed away.

I write this now with a heavy heart as I...we...have had to say our final farewells to two of our furry babies this year and that is two too many in my book.  Why their lives are so short and ours so very long is something I'll never quite understand....but their memories will live on in our hearts and minds.

﻿ ﻿ Zoe was just a 10 week old fuzzy puppy that has been with us almost 10 years...January 1st would have been her 10th birthday.  As she was a German Shepherd, many people thought she might be mean or vicious...but you know what?  She was a gentle giant.  You could sit on the floor with her and give her a BIG bear hug.  She'd play tug with the littlest pups of our family, making sure they had fun without hurting a hair on their heads.  Her sister, Lucia, would wander into her den sometimes and come out looking like she ran through a sprinkler, all wet and fur askew....it seems Zoe decided to give her a bath. 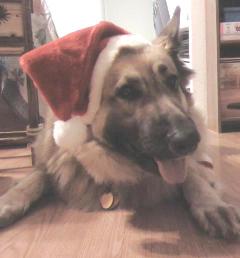 The memories I could share are many, but unfortunately the tears they bring to mind at this time are still too numerous as well and so I will draw this post to a close.  I do ask that if you have a furry baby you be sure to give them an extra big hug today...just because...and if you have one more spare moment, click over to the two organizations below to make a free donation to help animals in need.  There's no catch.  No sign ups or anything else.  Just simply a way to help our other furry friends out there get one step closer to the lives they truly deserve.

Email ThisBlogThis!Share to TwitterShare to FacebookShare to Pinterest
Labels: 2010, RIP

As one who is owned by two doggies and one crazy cat my heart goes out to you and yours. Our pets are with us such a very short time I agree but in that time they give us loads of fun, laughter and love.
They don't ask for much yet what we get in return is priceless.
Take care.
Love & Hugs,
Pam

Look at those peanuts. :( I am so sorry for your loss. It's a sad day when you have to say goodbye to a beloved pet. I'm still mourning my Jack.

Oh GMR no! What horrible news. I am so very sorry. Two in one year is unbearable! *hugs* I am SO sorry honey. *hugs*

Do they know what she had?

I know what you mean about gentle giant. My lab is like that. He's big and people are scared of him but he is more gentle and kind than my frisky little 9lb dog.

Thank you for sharing your photos with us.

My heart goes out to you, your family, and Lucia. She must be so confused.

I would like to imagine Winston and Zoe hanging out in heaven catching up.

OH NO!!!! I'm so very sorry to hear about Zoe, I can't imagine losing either of my boys. They are my family and I will be beside myself when their time comes. Zoe was absolutely adorable and losing 2 pets in the same year is entirely too many pets to lose. My thoughts are with you and your family:(

So sorry to hear about this, GMR. My heart goes out to you today because I know how close I am to my pup and my cat, and I still remember the pain of losing my first dog. My thoughts are with you and your family today.

My sweet dear friend you already know how sad I am about this loss of yours. Not only of Zoe, but also Winston. It's all just too soon. I truly hope you will all be comforted at this time. I will definitely keep you in my thoughts and prayers.

I'm SOOOO sorry to hear this. I am sending positive thoughts your way. As a dog lover, I know how hard it can be. You and your family are in my thoughts!

Aw. I'm so sorry this happened. Please know my thoughts are with you and your parents.

My heart goes out to you all. As you rightfully say our furry friends become more than pets, they really are one of the family.

Amber at The Musings of ALMYBNENR said...

This so very sad. I have tears in my eyes. My furry friends are so important to me and having lost one in 2000 and another in 2001, I definitely know how it feels. Right now I have a 10 year old Doberman who has some physical signs of aging and occasional problems but who can still play like a dog half his age. I know he's getting up there and these kinds of unwanted thoughts flit through my mind every once in awhile and I try very hard to put them out of my mind so I can enjoy my time with him. I also have a 3 year old Min Pin and she is my life. I want her with me forever.

I am so sorry for you loss.

Thank you so much to each of you for your kind words and heartfelt thoughts. They are much appreciated. We're taking it one day at a time...it'll be tough especially with the holidays, but we'll pull through in time, especially with friends like you.

I am so sorry. :( From one animal lover to another... I hope you take one day at a time and begin to heal.

Sometimes I think animals are better than people.

I’m so sorry for your loss :( My mom’s dog passed away last week as well, and I posted about my blog hiatus due to our kitten running away and me sinking into a depression because of it. Losing a furry family member is never easy :( (((Hugs)))

Christie: I am so sorry for you and your Mom...{hugs} right back at you.